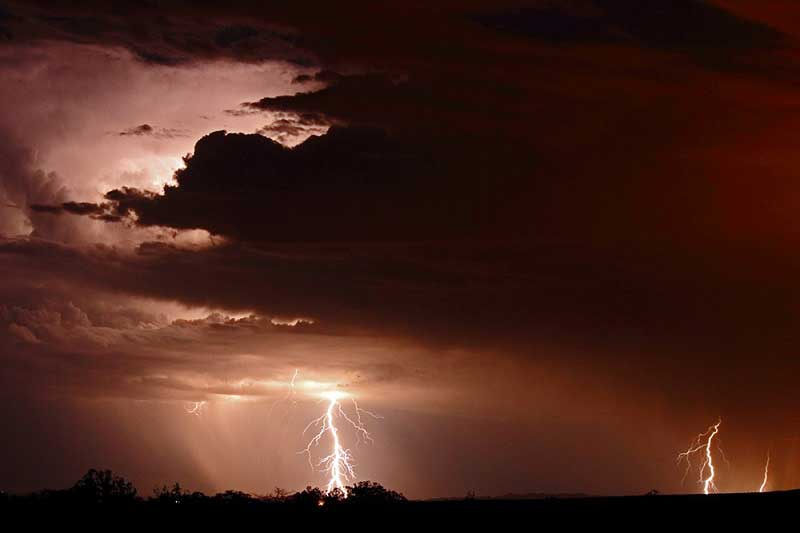 Photo by Bradley P. Risk
Lightning is beautiful, but dangerous. It can strike as far as 10 miles from a cloud.

It’s April Fool’s Day. A soggy, lamb-like March has just ended. Thunderstorm season is right around the corner. Test yourself on some storm advice and see if it’s April Foolishness or truth.

If you’re caught in the open during a lightning storm without any safe shelter, the best thing to do is to lie flat on the ground.

If lightning hits the ground or objects close to you, the charge runs out from the strike point, and the difference in voltage between your head and feet can kill you. Instead, you should crouch as low as possible on the balls of your feet like doing a deep knee bend. Hunch over as much as possible without touching the ground with your hands and cover your ears to protect against eardrum damage from the tremendous crack of thunder that accompanies a close lightning strike.

If someone is struck by lightning, is unconscious and in need of CPR, you should wait a minute or two for the charge to drain out of their body before you touch them. Otherwise, you may be killed by the stored charge in their body.

The lightning left no lingering charge. It was gone the instant they were struck.

A car is one of the safest places to be when lightning is striking all around you because the rubber tires insulate you from the ground.

Yes, it’s a safe place to be. You are surrounded by the metal shell of the car in what engineers call a Faraday cage. The electricity will pass through the car, not you. But the tires have nothing to do with your safety. The lightning will arc off the wheels to the ground. Remember, it just jumped an air gap from a cloud that was likely a few thousand feet in the air. It won’t have trouble jumping from the metal of the car to the ground.

An acquaintance of mine was driving along I-15 in southern Nevada when lightning hit his car. Both of his eardrums were ruptured, and all four tires blew out on the car. He barely maintained control of the car as it decelerated from 70 miles per hour to zero and spun off the road. Other than lingering ear damage, he was not injured.

Carrying anything metal during a thunderstorm increases your likelihood of being hit.

Since people are mostly a mixture of salt and water, you’re already a great conductor and target, especially if you’re standing. Lightning tends to hit the highest object in the area, metal or otherwise, especially if it is pointed.

Talking on the phone during a thunderstorm can get you killed.

The answer is true if you are using a traditional hard-wired phone connected directly to lines outside your home. Lightning striking a phone line miles away, or even a near miss, can induce a sudden spike of electricity down the line and right to your head, with fatal results.

But the answer is false if you are using a wireless phone or a cell phone. There is no physical connection with outside phone lines.

Ball lightning is a myth.

It’s real. Nobody seems sure how it forms, but spherical, sizzling, buzzing balls of it about basketball size or larger sometimes form as part of a lightning strike. They have been known to roll through an open door or down a chimney, and then disappear, sometimes with a loud bang. Driving in northern California, a lightning bolt narrowly missed my car, striking a telephone pole 30 yards away. A ball of glowing, bluish light popped into existence at the top of the pole, and rolled, or sort of floated, down the pole. Reaching the ground, there was a flash and it was gone.

Ball lightning is potentially very dangerous. Some who have come into contact with it have merely been severely shocked. Others have been killed.


Thunderstorms are an impressive and exciting part of our fields and forests, especially at night, if you view them from a safe location. But stay off the golf course, baseball diamond, and football field. Get off the lake. Don’t take shelter under a lone tree in an open area. Don’t use power tools wired directly into power lines. Have a flash-free April Fool’s Day.