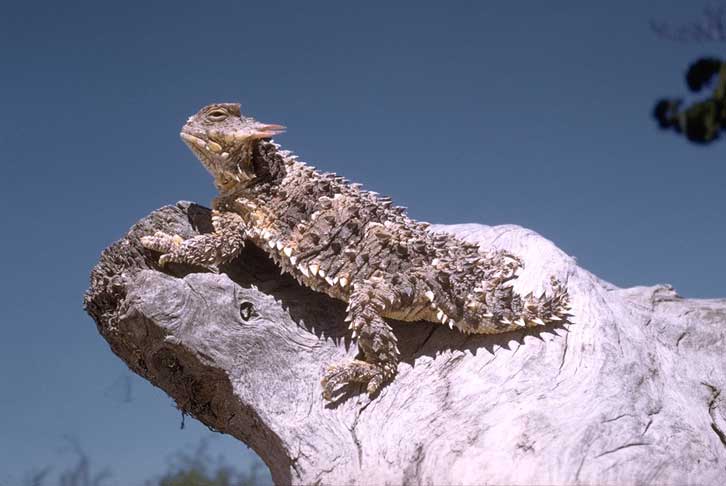 Photo courtesty of the National Science Foundation
A Horned lizard warming up by basking in the sun.

It’s a couple of hours after dawn and the lizard sitting on a sunlit rock in the early morning sun is moving like an old man. Is he arthritic or just not motivated? What’s going on in his little reptilian brain? The answer is, not much. It’s a reptile remember? Its thought processes are pretty limited at best. And right now it’s not at its best. No, it isn’t arthritic and no, it’s not highly motivated yet. That lizard is simply chilly and being a cold-blooded critter its physiological processes are running at creep speed. Quite likely its whole body is close to the temperature in the cold rock crack where it spent the night. Chemical reactions that run its brain, nerve pathways and muscles have slowed way down because of the chill. But, with the rising of the sun the lizard moves slowly, stiff of muscle and joint, out to the surface of the warming rock to cop some rays. Now its main aim is to warm up so it can think and move fast enough to get some breakfast or at least consider that possibility. As soon as the lizard’s body temperature rises enough it’ll get down to business. Then that lightning fast tongue its known for will begin slurping up insects, and the animal will once again be capable of super-fast bursts of speed in pursuit of moving munchies.

What do lizards do when it gets too hot? They cool themselves down by getting out of the sun or back into cool niches. If they don’t, they would soon succumb to extreme hyperthermia, and die of heat stroke. We cool ourselves by sweating. As perspiration evaporates, excess body heat is carried away. But lizards don’t sweat. While we have built-in evaporative coolers, they don’t. 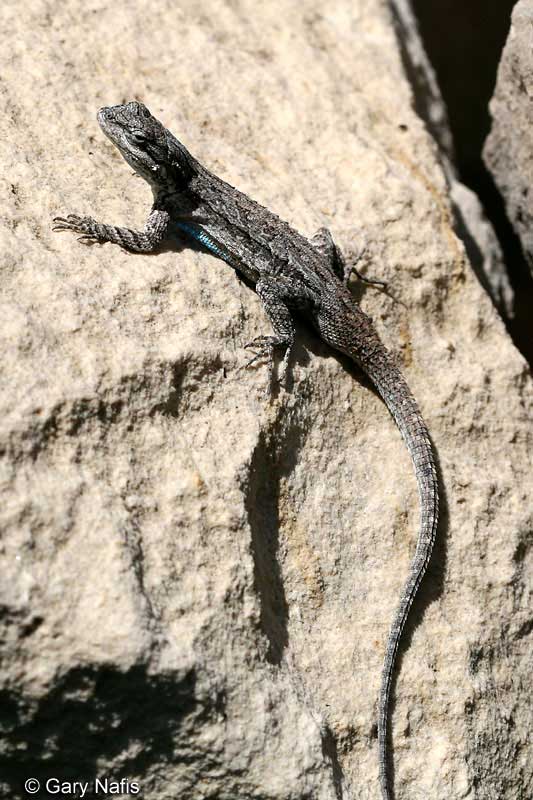 In contrast to the lizard, even if you slept in a cool, clammy cave, your body’s core would remain close to what we think of as a normal temperature around 99 degrees. Although you likely move like a chilled lizard when you first roll out of bed, that’s just slumber slowly relinquishing its hold on you combined with lack of interest, motivation and maybe arthritis too. If you had to move quickly, you could.

In a nutshell, you are a warm-blooded animal and the lizard is cold-blooded. Your body can maintain its temperature within narrow limits in a variety of environments. The lizard and its snaky relatives don’t have that luxury. They have to get into the sun or on a warm surface when it’s cold and find some shade when it’s hot. In spite of these requirements, they can tolerate greater fluctuations in body temperature than we can. If our core temperature drops much we become dangerously hypothermic and if it rises too high, we become hyper-thermic and feverish. Severe hypo- or hyperthermia can easily be fatal to all animals.

You and that lizard differ most markedly in the way you process food. Most of the food humans eat is converted to heat with only a relatively small percentage going to develop or maintain body mass. Metabolic heat keeps us warm even when it’s cold, but a lizard’s metabolism is too slow to do that.

In other words, our life processes are much faster than the lizard’s. One result of this is that lizards and other reptiles need far less food than mammals. Many snakes, for example, only need to eat about once a month.

Think about that. The next time you don’t like what your bathroom scales tell you, try a 30-day fast and see how you feel. In dire survival situations, humans can actually live 30 to 60 days without eating anything as long as they have enough water but “don’t try this at home.” It’s definitely not healthy.

So there you have it. Next time you see a sluggish lizard or snake, you’ll know it’s not lack of incentive, just absence of heat. It’s a metabolic problem not an attitude, as it is with some people. To me it’s fascinating how nature provides for such a huge variety of animals with widely varying needs and life processes and it’s just one more reason to be awed by the inhabitants of our fields and forests.