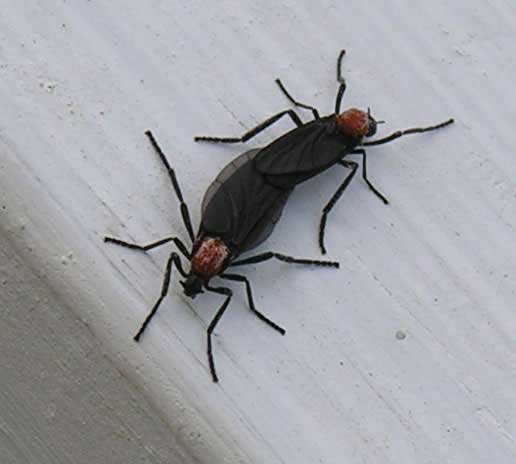 Wikipedia photo
Two mating love bugs. This typical position, even locked in flight, is why they have their name.

Yes, it’s a lovely spring. Trees are in full leaf. Flowers are blooming. The air is fragrant, but there are some things that I find hard to love. In spite of their name, love bugs are one of them. They go by several names but are usually called love bugs, honeymoon bugs, or united bugs because they are commonly seen flying around in mating pairs, tail-to-tail with their heads in the opposite direction. Some people call them two-headed bugs. In Mexico they go by the name of Combis.

These pesky little insects are now swarming in some areas of east Texas and are a real nuisance when you drive into a cloud of them. Windshields, bumpers, and headlights quickly get covered with sticky black splotches when you go through a flight of them. They can quickly clog up your car’s radiator and reduce its cooling ability. And it doesn’t do much good to run your windshield wiper spray. It just smears them around and makes visibility even worse.

Attracted to the heat of automobiles and chemicals in exhaust, highways are favorite flyways for them. One nice thing is that they do not fly at night. If you run into a swarm of them, slow down. You’ll reduce the number of fatal head-on collisions with them.

Love bugs are actually flies native to South and Central America, but they successfully moved into Mexico. Then about 1940 they crossed the border into the U.S. In case you wondered, Pres. Trump’s proposed border wall would not have stopped them. Undocumented, and therefore illegal, they are now found in all states along the Gulf Coast as well as Georgia and S. Carolina. However, U.S. Immigration and Customs don’t list them on their wanted posters. I guess enforcement would be a little tough.

Only about ¼" long with black bodies and heads and an orange thorax, for their size they have a major impact on their favored areas, messing up cars, and leaving their dead bodies on window sills and steps. During their mating season they lay between 100-300 eggs in moist areas in dead leaves and grass. Adults only live 3-4 days, but there are hundreds of thousands of them laying eggs as fast as they can. The eggs then hatch and pass through a larval and pupal stage, eating dead and decomposing organic matter on the way to becoming adults. Adults, during their brief life span, eat nectar and pollen and assist in pollination. Then for 3 or 4 weeks they rise from their breeding grounds. And you know the rest of the story.

Robins and quail have been found to eat large quantities of love bug larvae, and other ground feeding birds, and perhaps armadillos, have been suggested as possibly benefiting from the immature love bugs. But they don’t seem to be making a significant impact on their numbers.

The adults emerge twice a year, usually in April and May, and again in August and September. Some years there are many of them. At other times they are few and far between. Often, they fly in huge clouds, drifting in the wind.

Love bugs don’t bite or sting, and they are not carriers of diseases. But they do cause damage. Their mortal remains, splattered on your car, are acidic, and the longer the mess is allowed to remain, the more damage they do to paint. They etch the car’s painted surfaces and can do permanent damage to the finish. Also, as they dry they are harder to remove. There are commercial bug cleaners available at auto supply stores that are very helpful in removing them. Some people swear that Coca Cola can be used to remove them. In any case, early removal is the key to success.

I never cease to be amazed at the number and variety of animal species that abound in our fields, forests, swamps, lakes, ponds, and streams. They far outnumber humans. Love bugs are just another part of nature’s interesting complexity.