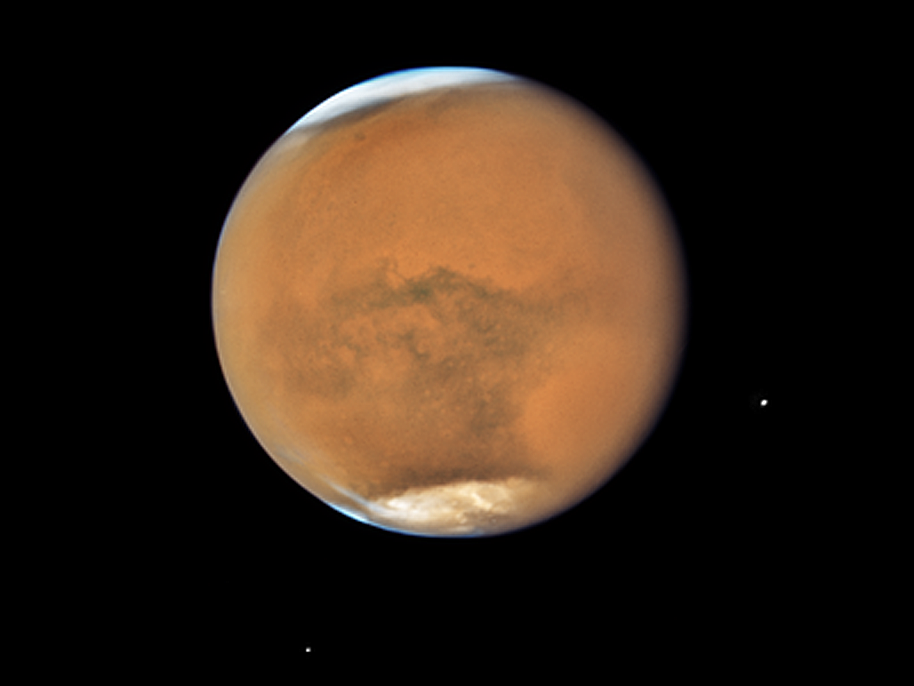 Photo courtesy of NASA
Mars showing both its polar ice caps on July 12, 2018.

Over the past several weeks, a very bright red “star” has been visible during much of the night. Depending on the time of night you look, it moves from southeast to south to southwest. In any case, it is visible virtually all night. Now is a great time to see it. It’s the planet Mars, and it hasn’t been this bright since 2003.

Mars has long been a subject of conjecture and awe. The Egyptians first recorded its presence about 2000 B.C. The ancient Romans, because of its color, named it after their god of war. Mars was second in importance only to Jupiter, the chief of all the gods. In fact, the derivation of the name Jupiter means “heavenly father.”

A lot of fanciful speculation has revolved around the red planet. Percival Lowell thought he could see “canals” on Mars, and he wrote extensively about them during the latter 1800s and early 1900s. And as far back as 1877 Giovanni Schiaparelli also thought he could see so-called “canali” on its surface. Vivid and imaginative speculation proposed that the “canals” were indications of ancient irrigation systems. Modern optics and exploration have shown that they don’t exist. They were, perhaps, optical illusions.

The list of other Mars lore is endless. But human imagination has no limits, and exciting stories and illustration have been published for many years promoting the idea of Mars monsters that were half human and half something else even weirder than us.

The color of Mars is due to its soil and dust being high in iron content. Recently this Martian red dust has frustrated astronomers. For months a massive dust storm has covered its entire surface making it impossible to see ground features, and the rover Opportunity has ceased sending signals to Earth.

In 2003 two wheeled rovers called Spirit and Opportunity landed on Mars and began to roam around, sending back pictures while analyzing soil and rock samples. The rovers were expected to only be functional for 90 days. They have far outlived predictions.

Spirit ceased to transmit in 2010, but Opportunity was still active until June 10th of this year. Scientists think it probably has gone dormant due to dim light and dust covering its solar power panels, or a timer fault. They are sending a signal to Opportunity three times a week attempting to trigger a response.

Mars continues to amaze. For example, Olympus Mons, a Martian volcano, has been discovered that is 16 miles high. That’s 69,000 feet, or 3 times higher than Mt. Everest, and 373 miles across, the largest such feature in our solar system. And it may still be active.

Very recently a 12-mile diameter lake a mile below the Martian south polar ice cap has been discovered. It might be a potential source of water for explorers, and could harbor life forms of some kind.

Take some time when the skies at your location are clear and do some nighttime sky gazing. Here in our area the lack of rain has greatly reduced the number of mosquitoes that might want to interfere with your observing pleasure. Use mosquito repellent anyway.

The night sky is something that many generations of people have been awed by and enjoyed seeing. Starlight in years past, when light pollution was no problem, was so bright you could see to walk without a candle. Can you imagine?

The beauties of our fields, forests and skies are free. Take advantage of them and literally expand your horizons.