We’ve experienced two very large, bright moons recently. One was called a Super moon because of its unusually close approach to Earth. On the 4th of this month the moon will be in its first quarter, waxing larger each night, finally becoming “full” on the 11th.

When the moon is only partially lighted, the boundary between light and dark, called the terminator, will be illuminated by slanting sunlight. This shadow effect makes it easier to see features on the lunar surface. Scanning the moon with ordinary binoculars reveals amazing detail of craters and mountains. 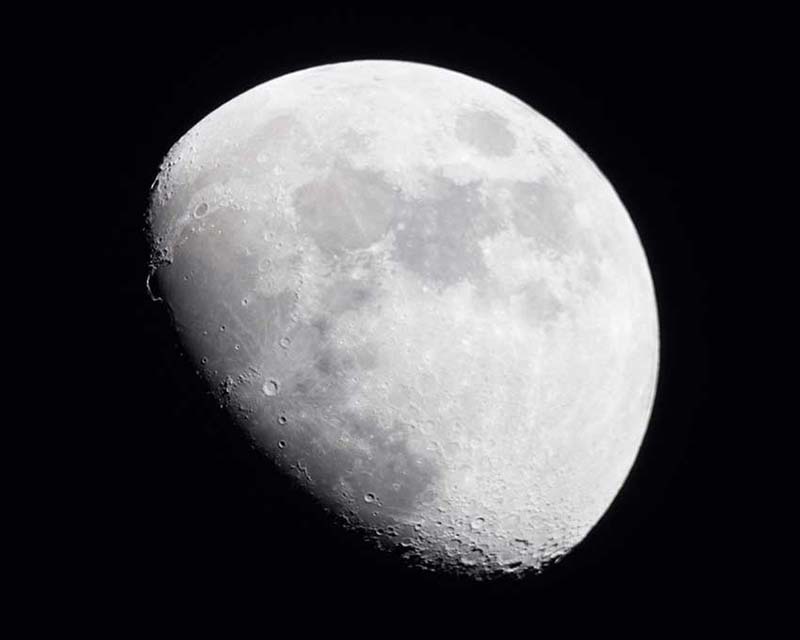 Photo by Bradley P. Risk
The moon rotates at exactly the right speed to keep the same side facing earth at all times. The dark areas forming the image of the “man in the moon” are ancient lava flows.


The moon is a “mere” 250,000 miles away. It’s not very large – about 2140 miles across, or about one-fourth the size of Earth, and its gravity is only one-sixth of ours. But Luna’s influence on the earth is profound and far reaching.

As the moon orbits the earth, the oceans under it bulge upward and high tides occur. This rising and falling of water levels along coasts, exercise great influence on animals and plants that live in the intertidal zones – areas periodically flooded and then drained by the advancing or retreating tides.

The moon’s phases are caused by its position relative to the sun and Earth. When it’s on the earth’s far side, with sunlight reflecting directly off its entire surface, we say the moon is full. On the opposite side of Earth, roughly between us and the sun, the “dark of the moon” or “new moon” occurs. Interestingly, as more of the moon’s surface becomes shadowed, you can still see features in the dark areas. The light that dimly illuminates these dark regions is reflected sunlight from the earth’s surface and clouds and is called “earthshine.”

When there are two full moons in a month, the second is called a “blue moon.” These occur rarely – only every two or three years. Two blue moons in the same year only occur three or four times in a hundred years.

Photo by Bradley P. Risk
The sliver crescent moon sets over the Huachuca Mountains in southeast Arizona, along with Venus to the right.


Does the moon affect human behavior? Well, according to some police officers I’ve spoken to contend that violent crime seems to increase during Luna’s full phase and it was long believed that exposure to it’s rays produced lunatics, a mistaken impression. Ancient European folklore includes tales of werewolves, moonstruck humans that lope off under the moon’s full light to ravage helpless victims. Personally, I find its effect soothingly pleasant, and lovers have long snuggled under its gentle glow, “mooning” away the night in romantic reverie.

Luck and omens have been associated with the moon for generations of time. Farmers have long been encouraged to “plant your corn by the full of the moon” to assure a bounteous crop. A full moon on Friday the 13th is supposed to be the unluckiest day. Other moony folk beliefs include these:

The most widely held mistaken belief about the full moon is that it’s larger when it rises than when it’s directly overhead. The common explanation, but still wrong, is that the atmosphere magnifies the moon’s image when you view it close to the horizon. But, that’s just an optical illusion. It is really the same size high in the sky as it is when first rising or setting. The moon will be full on January 11, rising at about 6 p.m. Take a 3x5 card outside when the moon first comes up. Hold it at arm’s length and make tick marks on its edge marking the moon’s apparent diameter. Go back out again when Luna is high in the sky and check again. They will be virtually the same.

So, go out this month and absorb some moonshine – the lunar and not the liquid kind. It just might calm your restless heart and provide you with a new perspective about the night this New Year. Maybe you’ll feel like getting in some howling practice as well.