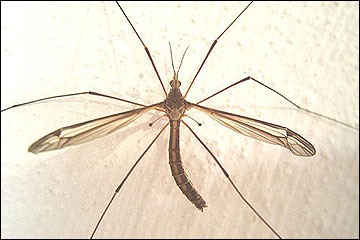 Mosquito hawks, AKA crane flies, are one of the first insects that show up in and around homes in the spring. An inch or two across, they hang around the porch lights in the evening, looking casual until your door opens and then they swoop into the house. As a youth, I was terrified of these “evil” creatures and there was no doubt in my mind they lurked outside the house for the sole purpose of sneaking in to drink my blood.

Their lumbering, clumsy flight may make them look like a shot-up bomber, but their long legs, thin transparent wings, torpedo-shaped body and small head were enough to give me goosebumps. I knew for a certainty they were giant mosquitoes concealing a huge, hollow, needle-sharp proboscis beneath their body. Even when well-meaning (but mistaken) adults told me they only ate mosquitoes, I was still suspicious, and I could vacate a room harboring a crane fly faster than the speed of light!

Interestingly enough, I was not alone in my fears, and a few of the widely held stories about crane flies had some basis in fact, but most did not. Certainly, they can be large. Sitting on your hand, a Giant Crane Fly’s legs can span your palm. Even though crane flies are dipterans, in the same order with mosquitoes and various other two-winged flies, they don’t bite or sting or even like blood. Actually, little is known about the feeding habits of adult crane flies, but it is likely that only the larva feed, eating algae, decaying vegetation, and grasses. At any rate, mosquitoes can rest easy. Adult crane flies aren’t any more dangerous to them than they are to people. However, the European crane fly larva, an imported alien from Europe, and called a “leather jacket” because of its tough grey, brown, or black skin, is a lawn pest in some areas of the United States, devouring grass roots, crowns, leaves, and stems. Crane flies serve as food for fish, birds, and other insect-eaters. Look upon them with interest, but have no fear. They’re harmless. 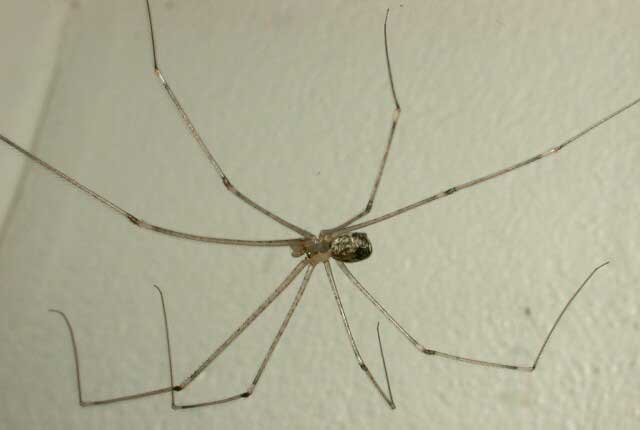 Photo by Steve Clark
Daddy longlegs are related to spiders and have no wings. Like crane flies, these common porch visitors are harmless.

Daddy longlegs, sometimes called daddy longlegs spiders, aren’t really spiders but are related to them. I was sure they were deadly, leggy, wingless, people-biters. Popular myth held that their venom was more toxic than a cobra’s, given equal quantities. With their somewhat gangly, stilt-like legs and tiny body, they look like a tiny black or brown bead suspended on delicate threads. I was sure it just concealed a malevolent attitude. Also, they scuttled, and anything that fast, with legs that long, was dangerous!

Here again, daddy longlegs, sometimes called harvestmen, aren’t what they appear to be. Their tiny mouthparts are insufficient to permit them to bite you. Their name can also be confusing. In England, crane flies are called daddy longlegs, and the eight-legged harvestman (our daddy longlegs) is called Harry longlegs. Daddy longlegs don’t produce silk, make a web, or have fangs, and instead of two body parts like a spider or three like an insect, they have only one.

Some kinds of daddy longlegs eat small insects, snails and worms and others eat plants, fruit, and dead vegetation.

Anyone who has picked up or otherwise molested a daddy longlegs knows that they can emit a strong smell as a defense measure. A predator looking for a meal would get a nasty, burning taste in their mouth and likely drop their unwilling snack.

The legs of this spider-like arachnid are very fragile and not firmly attached. If you try to pick one up, you’ll very likely be left with only a leg or two, still twitching, while the owner scurries off to safer territory. It has been suggested that the separated, twitching legs may divert a predator long enough for a quick escape.

So cross crane flies and daddy long-legs off your “To Be Afraid Of” list. They’re just “doin’ their thing” in the interesting and complex fields and forests of East Texas.