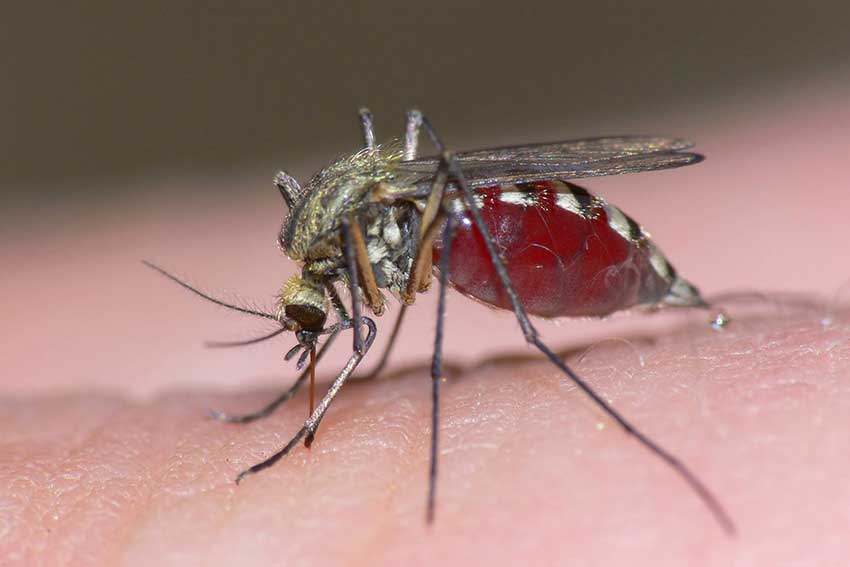 Photo from Phinizy Center for Water Sciences
A mosquito drinking a belly-full of human blood. Some species of mosquitoes can carry yellow and dengue fevers, as well as encephalitis.

Where have all the mosquitoes gone? Mosquitoes that once swarmed in biting clouds in spring and summer suddenly disappeared when temperatures fell below about 50 degrees in the fall. Then come spring they’ll suddenly reappear, almost like magic, by the thousands. How do they survive the winter? Or do they just start from hatching eggs? Actually, the answer is they do both.

In the fall mosquitoes mate, and the males die. Females overwinter, hiding under bark, in dead leaves, or cracks of dead branches and many other protected places including openings in bricks and cinder blocks and in garages. Some mosquito larvae remain in the ponds where they were hatched, but they pass into a condition called diapause. Their development slows almost to a halt as the water temperature falls, and they begin development again only when temperatures rise.

Some adult mosquitoes have a special adaptation to cold weather. Their bodies contain glycerol – antifreeze – that keeps them from being killed by the winter chill. Mosquito eggs lie dormant throughout the winter, often in moist soil at the edge of ponds or in standing water, awaiting warming spring weather to hatch. As water levels rise, the eggs in the soil begin to hatch and so do those that remained in the water over the winter. Soon thereafter the hatchlings, larvae called wigglers, begin to appear in ponds, puddles, and other standing water. Within two to three weeks they will develop into adults. 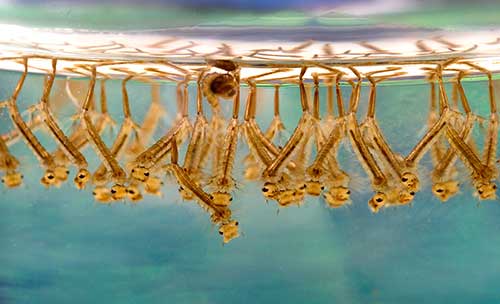 Wikipedia Commons
These mosquito larvae will develop into adults in two to three weeks and begin hunting for animals to feed on.

When the adult females awaken with the first balmy breezes of spring, they are famished – hungry for a meal – and off they buzz like mythological Dracula’s bats, seeking food – blood – you and me. A blood meal is required for the females to develop fertile eggs. At the same time, clouds of males develop, and females fly into the swarms to mate, lay eggs, and die. Adult mosquitoes only live two to three weeks. But their life cycle is so rapid you and I don’t even notice.

I know it seems unfair to be targeted by bloodsuckers. But don’t feel too special. Mosquitoes also feed on the blood of dogs, frogs, deer, squirrels, horses and other animals, depending on their species. Does that make you feel better? I didn’t think so.

Mosquito females are the biters and, of course, the egg layers. With specially adapted blade-like mouthparts they stab their victim and suck up blood, injecting an anti-coagulant to keep the blood liquid. It’s that clot-preventing chemical that makes the bites sting and itch from an allergic reaction. A female mosquito can lay up to 300 eggs. Guess how many thousands or millions of fertilized females hum through the air during spring, and multiply that by 300 for each one, and you have some idea of how many and how fast new mosquitoes appear in spring.

Males are basically just mating machines. They eat only sugary substances such as plant nectar and juices, soar off to find a female to fertilize and then die. Personally, I don’t care what sex the biting hordes are, I’d rather avoid them all.

On the other hand, I’ve often heard folks ask, “what good are mosquitoes since all they do is make life miserable and carry deadly diseases?” Well, nature is complex, and humans, unless they make a point of studying the details of natural processes, are seldom aware of the reasons many organisms exist, especially those at the lower end of the food chain.

Mosquitoes are more important than you might think. Their larvae eat micro-organisms in the water in which they live. Then they are eaten by fish and other aquatic animals. Without mosquito larvae and pupae, some fish and other water-dwellers would have a tough time existing.

Adults serve as meat “on-the-hoof,” so to speak, for a wide variety of predators such as dragonflies, birds, bats, and spiders. The chain continues as these animals serve as meals for those higher up the food chain.

If mosquitoes suddenly ceased to exist, the results would likely be catastrophic across the entire system of organisms that inhabit the fields and forests.

In any case, for comfort’s sake, enjoy the skeeter-free winter months. Our cold weeks are relatively short and before you know it, the squadrons of pointy-nosed pests will be back having a feast – on you!