The mountain men had it right. Escape to the high country. Leave the heat and humidity behind – not to mention most worldly responsibilities – and head west. The past several weeks across much of the United States have been miserably hot and often humid. For my wife and me the Cedar Mountains of southern Utah are providing a welcome cooling relief.

Photo by Paul H. Risk
The mountains of southern Utah provide a wonderful escape from the pressures of everyday life.

But, mountains are curious things. Obviously, they stick up in the air above their surroundings, providing photogenic backdrops for flatlanders. But more than this, they generate their own powerful weather and remind us that humans really aren’t in control at all.

As a warm moist air mass surges against mountain slopes it is forced upward, cooling as it gains altitude. Take a look at your iced tea glass and you’ll get an immediate idea of what happens. The damp air, as it cools against the glass, chills and moisture condenses out. The same thing happens in mountain storms but the effect there is the formation of clouds, rushing winds and spectacular thunderstorms. This afternoon we’re watching several. First white and puffy, then gray and black, the clouds are towering into the sky, thunder rumbling ominously while an occasional streak of lightning snaps from their base to the ground.

From a distance, the lightning is first seen and then heard. It’s easy to find out how far away the storm is. Count the number of seconds between the flash of lightning and the thunder crack or boom. Sound moves at about 1100 feet/second. A flash and a five second space before you hear the thunder means the lightning is about 5500 feet away – a little over a mile. Our storm is approaching steadily and growing rapidly. The gap between the flash and boom has shortened until with ear shattering force the bolt and the bang coalesce into a single explosion. I’m glad we’re not on a ridge or summit.

Water drops form in the clouds’ moist interiors, lose their grip and begin to fall toward the ground as gray draperies of rain trail beneath the cloud castles. Sometimes rain curtains evaporate before they touch the ground and are called virga, but in other cases, like last night, torrential downpours reach the ground. As much as two inches in an hour may have fallen in the canyon below our 8300-foot retreat near Cedar City, Utah. Mud, sand, gravel, rocks and boulders five times as large as watermelons gushed in a muddy torrent down the steep mountain streams and tributaries, pouring from canyons and formerly dry washes across the highway leading to our vacation sanctuary. In several locations traffic came to a standstill as flash floods cut off roads, leaving travelers temporarily stranded until road crews with heavy equipment could scrape away the debris. Luckily nobody was caught by the descending torrents. Every year, flashfloods like these sweep people and machines off the roads and tumble them effortlessly and sometimes fatally down rocky draws and canyons.

Mountain thunderstorms often cover very limited areas. One spot may get thoroughly soaked by a real frog strangling gully washer, while another location not far away can be as dry as a bone. Here in the Cedar Mountains this week, many storms have been mild with only enough rain to enhance the summer fragrances of sagebrush, pine, fir, and spruce and cool the afternoons below the 75 degrees that’s been about average for the past several days. That’s right, 75 degrees. Eat your hearts out! 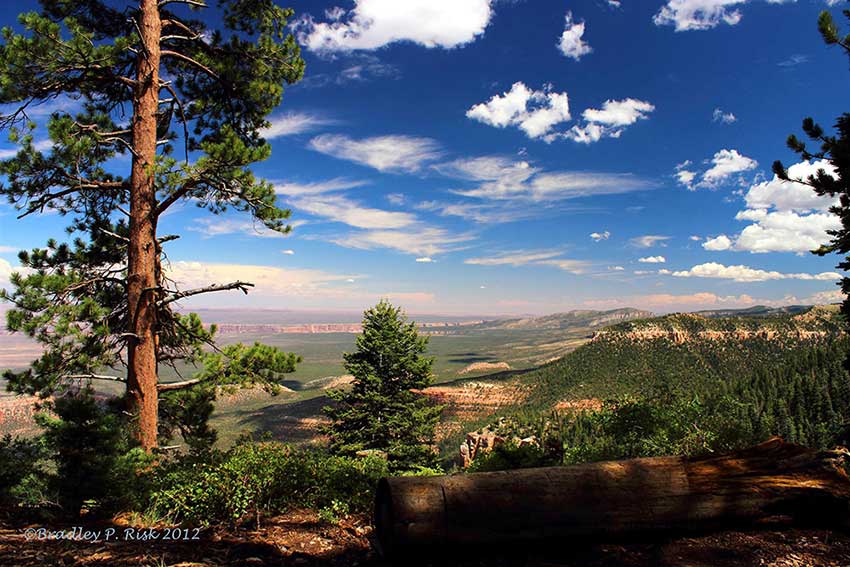 Photo by Bradley P. Risk
The area around and to the north of the Grand Canyon is a favorite spot for relief.

The smell of western mountains is intoxicating. Blindfolded, I’d know instantly if I were surrounded by sagebrush, creosote brush, Ponderosa Pine, or several other herbs, shrubs, or trees. Sage and creosote bush smell sharply bitter-spicy. But here Ponderosa pine is king, producing a wonderful, sweet, creamy fragrance. Did you know that some vanilla flavoring is produced from Ponderosa pine bark? Next time you’re out west, put your nose against the orange bark of a sun-warmed Ponderosa and inhale deeply. Besides a snootful of small beetles, you’ll find they smell like vanilla or butterscotch. But, in either case, the fragrance of Ponderosa is always rich and wonderful. Mixed with other aromatic plant vapors, warm mountain air produces a heady effect.

Then, there’s the wind. With the sound of a rushing mountain stream, it slides wraithlike across the miles of forest that surround us, first approaching, then receding. Conifers bend in graceful ballet and quaking aspen leaves shimmer and shimmy gently. In the absence of human chaos and noise, the wind’s sound, coupled with its aroma, speaks a language of distance, open space, wilderness, solitude, and peace. On its invisible wings ride not just aromas and sounds, but also the ghosts of the ancient Anasazi, more recent Native Americans, mountain men, and pioneers long gone. Whispering gently, fragrant breezes over the vast forests are calming and reassuring, lending us, at least for a time, a special mountain blessing.