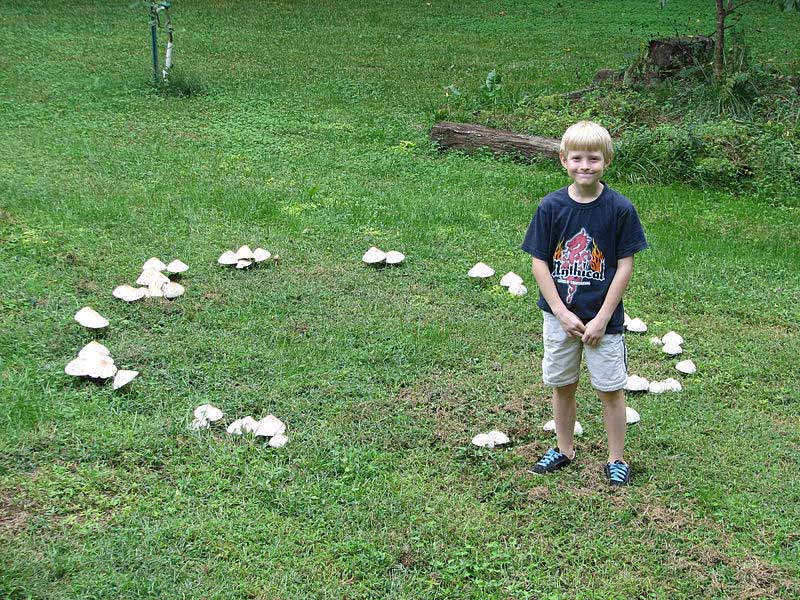 Photo by David Gough
This young man is standing perilously close to interior of a magical fairy ring. But he doesn’t seem worried.

Along with all the rain, mist, and humidity over the past couple of weeks has come a bumper crop of mushrooms and other fungi. Appearing in a myriad of shapes, sizes, and colors, the most typical and recognizable funguses are those with a stalk and cap, sometimes called toadstools, that appear on lawn and forest floors.

Whether toads ever use these capped fungi for footstools, I don’t really know. In my most whimsical modes, I’d like to think they do. Or, at least they might perch on them to rest and get a more elevated view of their surroundings.

Around the world, there are both edible mushrooms and deadly fungi. The toxins the deadly ones carry can cause fatal nerve, liver, and kidney damage that is not reversible. Make a mistake and eat one of the truly deadly ones and you’re going to die. Simple as that.

On the other hand, food stores are filled with a wide variety of delicious mushrooms, some with caps as large as a small plate. Over the years I have certainly consumed my share of them, sliced, chopped and sautéed in a variety of ways, not the least of which is steak smothered in fungus – uh – mushrooms.

The mushrooms you see popping up in the lawn, on dead logs, at the base of trees and other places, are just the fungus fruiting structure and only a small part of the entire plant. A vegetative web of widespread, thread-like tendrils called a mycelium has been invisibly living and spreading in the soil or dead wood all year long, or for many years. Fungus mycelia are quite beneficial, assisting in decomposing dead organic matter and reducing it to soil.

When conditions are right, usually in spring or fall after rains, the fruiting body we call a mushroom appears from the mycelium, often overnight. The mushrooms produce spores that drop, tiny and dust-like, either directly under the cap or are carried on the wind like microscopic seeds that sprout and produce new mycelia. A single fungus mycelium in grass or the forest floor may form a network covering several acres. 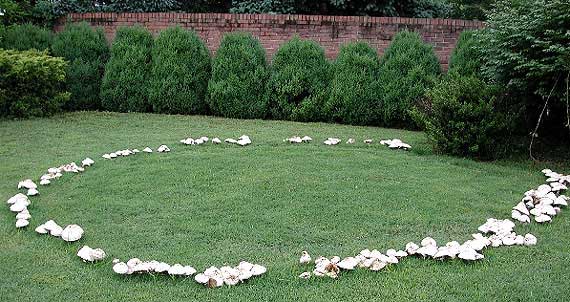 Mushrooms, appearing singly or in little clusters, may be one thing, but what about these big circles of them coming up in lawns? Fairy rings, that’s what. Or sometimes they’re called pixie rings.

The mushroom circles are the outer margins of the fungus thread or web that has been there all along. The mycelial web started as a single point or spore and has been growing invisibly out from its center. Then almost magically – remember that word – when conditions are right, the fungus suddenly sprouts mushrooms in a circle around that central point. The mushrooms themselves are actually the fruiting bodies of the fungus, and their gills will release spores to produce more fungus plants and the process will begin all over again. In other words, there’s nothing magic about the circle. Or is there?

Tales dating back into antiquity tell of fairies or pixies dancing in the night around or within the circles and using the mushrooms as seats upon which to rest to catch their breath between frolics.

Some stories carry dire warnings of bad luck associated with the rings. To stumble into a fairy ring might bring disease or bad luck. Some people believed that you could be captured by the fairies and drawn down to their underground kingdom into slavery. Dairy farmers were afraid that the milk from cattle grazing within the rings would be sour.

On the other hand, some folks believed that building your home in an area where fairy rings abounded would bring good fortune. It was also said that fairies often buried treasure inside the rings. And dew collected from the ring made a powerful love potion.

So, take your choice this season. Good luck or bad, fortune or famine, I like the idea of fairy rings and hope one night, when tattered clouds drift across a full moon and mist cloaks the glades, to see their flitting fairy dance. Let me know if you do. Maybe good luck will follow both of us.