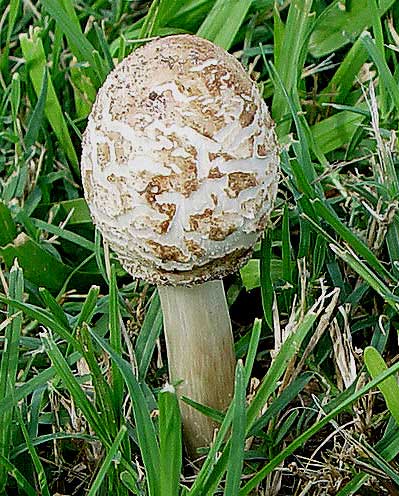 Photo by Paul H. Risk
Immature Chlorophyllum mushroom sprouting in our lawn. Its cap is still not open.

The rainy, humid weather has produced a fungus festival in East Texas. Mushrooms and other fungi are popping up all over town. It’s a field day for gourmets who are adventurous or carefree enough about balancing a delicious feast against a ghastly death by mistakenly collecting and eating poisonous mushrooms.

Although there are many edible and wonderfully flavored fungi, there are also a lot of killers, along with many more that won’t kill you but will make you so sick you’d wish you were dead. So, before I go any farther let me strongly warn you that collecting wild mushrooms to eat should be left to experts. And each year even some of them make mistakes and pay for it with their lives.

Poisonous Chlorophyllum mushrooms are common here and cause severe nausea, diarrhea, disorientation, painful stomach and abdominal cramps, and sometimes death. They are responsible for the largest number of reported mushroom poisoning cases in the United States. 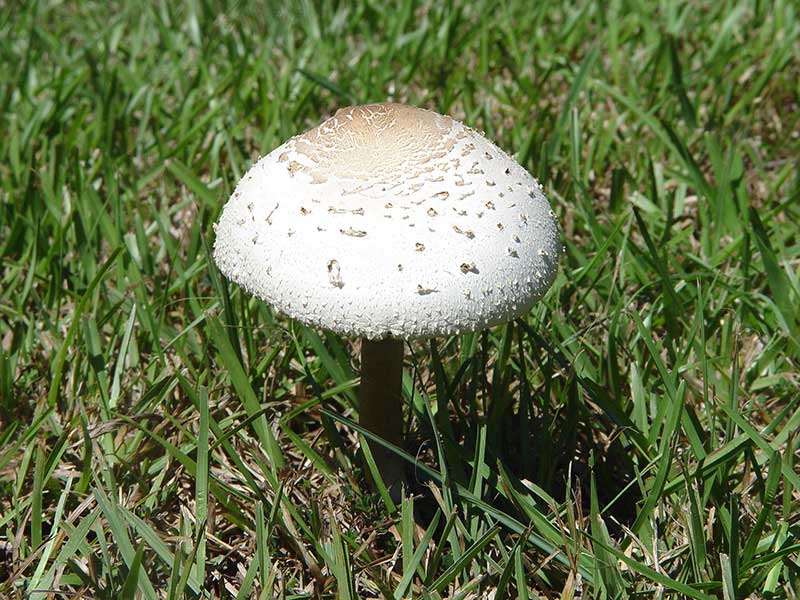 There are only a few fungi that I know well enough to eat. Puffballs are one of those. They have no cap, gills, pores, or the usual kind of stalk, and vary from less than an inch to 12 or more inches in diameter. I have harvested several large puffballs from our lawn – one the size of a grapefruit. We sliced and sautéed them, sprinkled them with a little salt, and gorged ourselves on their zero-calorie white flesh.

But, just because I eat something doesn’t mean I’m recommending it to you. For Pete’s sake don’t take my word for it. There’s too much at stake if you make a mistake. Unless you’re in a hurry to meet God, just enjoy fungi visually. Many mushroom poisons are untreatable. Even if you survive an encounter you may sustain serious and irreversible kidney or liver damage to the point of complete organ failure. Poisoning symptoms often don’t appear for hours after eating, far too late to be treated.

Many people call wild mushrooms toadstools, especially poisonous ones, from the mythological belief that toads sit on them or reclining in an easy chair, prop up their long hind legs as they smoke a pipe. To me, poisonous or not, they’re all mushrooms, although some lack the typical stalk and cap and look downright strange. 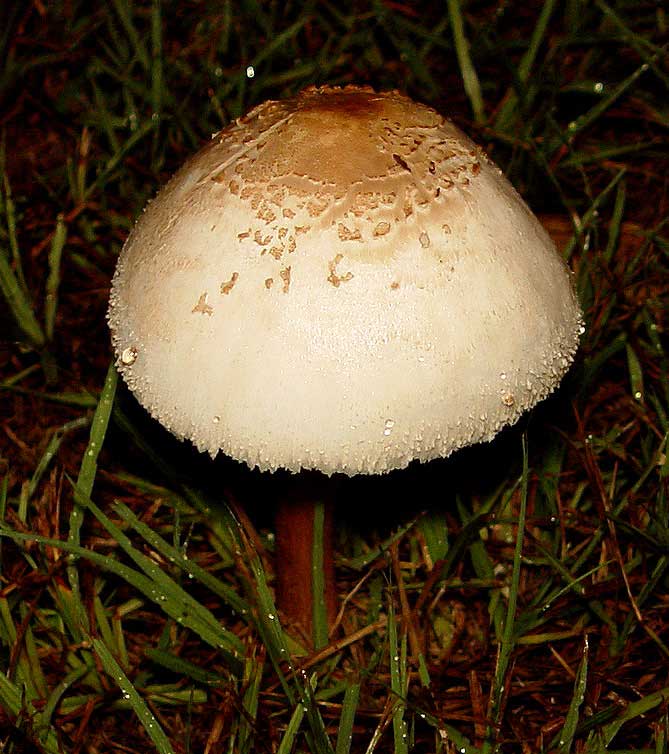 The mushrooms you see popping up in the lawn, on dead logs, at the base of trees and other places, are just a small part of the entire fungus plant. A vegetative web of widespread, thread-like tendrils called a mycelium spreads unnoticed in the soil all year round. Fungus mycelia are beneficial, assisting in decomposing dead organic matter and reducing it to soil.

When conditions are right, usually in spring or fall after rains, mushrooms sprout from the mycelium, often overnight and frequently in circles called fairy rings. They produce dust-like spores that drop directly under the cap or are carried on the wind like microscopic seeds that sprout and produce new mycelia. A single fungus mycelium in grass or on the forest floor may cover several acres.

Fungus spores come in various colors and are important in mushroom identification. Try an experiment. Take the cap off a mushroom and place it underside down on two pieces of paper, one black, the other white. Half of the mushroom cap should be on the black paper; the other should overlap onto the white sheet. In an hour or so falling spores will produce an interesting print. White spores will show up best on the black paper and dark spores on the white. Chlorophyllum spores are green and as it ages its gills turn green too.

If you have a fairy ring in your lawn, get up in the dead of night, particularly if the moon is full, and look for tiny winged fairies cavorting within the magic circle. You just never know. I believe in them. Sadly, I’ve not seen any yet.