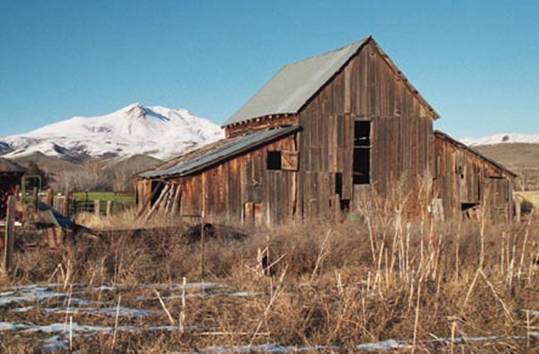 Photo by Paul H. Risk
This old barn with snowy mountains in the background are wonderful reminders of how the outdoors once filled and influenced our lives.

The days are long past when we spent most of our time in the outdoors and on farms, but the English language is filled with words and phrases that go back to those pleasant, slower, and often harder times.

Our pioneer ancestors knew their surroundings and were familiar with the behavior of the animals that made their homes there. Many of our sayings derive from those times.

Birds provide a whole set of sayings that many of us use daily – many with unpleasant connotations. Some, however, were just good advice. “The early bird gets the worm” so get in there fast and take quick advantage of every situation.

Someone who is sort of rattle-brained and not too sharp is sometimes called “birdbrained,” referring to the imagined size of their brain. “Feather-brained” is used to describe someone whose head must the full of feathers and fluff or they wouldn’t “act that way.”

“Crazy as loon,” “nutty as a squirrel,” and “bats in your belfry” have the same meaning, but folks from East Texas may never have heard the call of a loon at dusk over a northern lake. Their crazy sounding laughing call does sound like they’ve lost their mind. It’s a little spooky and at the same time mystical and beautiful.

When you were a kid did your mother ever warn you not to run with a particular group of youth she considered would always be in trouble? Mine did. “Paul, remember that birds of a feather flock together.” In other words, you’ll be judged by the company you keep. Sounds like profiling, doesn’t it? And she was right.

A person who was ill might be “off their feed,” just “eating like a bird,” merely pecking at their food. Jumpy, nervous folks are often called “flighty.”

Or worse yet, did your father ever tell you that if you ever did something stupid and against family rules again, he’d “tan your hide?” I guess nobody threatens that any more. Paddle a child and the law will be on your doorstep with a warrant for child abuse. (Don’t get me started on that!)

Folks have always hoped their kids would grow up to be tough enough to handle the stresses, trials, and dangers of life. John Wayne, starring in a movie called True Grit described Kim Darby his co-star playing Mattie Ross, as having “real sand.”

Some birds swallow sand and small pebbles that stay in a muscular esophageal pouch called a gizzard, crop, or craw. Food in the gizzard is ground up by the sand and muscular contractions. Someone who doesn’t like or believe something they hear might be said to have something “stuck in their craw.” Say something outrageous enough and they might become “mad a hornet” and be on you like a “duck on a June bug.” And you haven’t seen anything until you’ve seen somebody get “mad as wet hen.” Lots of squawking, flapping and flailing around.

Turkey gizzards are famous for crushing hard food like unshelled pecans and even hickory nuts. Grit, as an additive to chicken, feed can increase the digestion of seeds and grains by as much as ten percent. Chicken feed, by the way, also refers to a small amount of money. That price is “chicken feed.”

Well, I need to get this epistle finished. It just keeps dragging on and on. The list of colloquial sayings with the outdoors as their base is endless. If you feel like it, drop me an email or letter with other ones.

In the meantime, I’m not enough of a “night owl” to keep typing much longer. The sun is gone and outside it’s as “dark as the inside of a black cat at midnight.” So, enjoy the fields and forests and all the colloquial sayings they inspire.