Photo by Paul H. Risk
As this sunset over the Mississippi River at Nauvoo, Illinois symbolizes the beautiful end of a day, sunsets everywhere on December 31st will help usher out 2017.

The new year – 2018 – is almost upon us. It came sneaking up without much fanfare. Time has a habit of doing that.

Some astrologers (not astronomers) are predicting that just before the New Year on December 21st, the Winter Solstice, will be the worst day ever, and filled with catastrophes. They say that celestial alignments which haven’t happened for 350 years will cause disastrous events. For the first time since 1664, the sun will move into the constellation Capricorn hours after Saturn does the same thing causing the sun and Saturn to line up and forecasting a disastrous year.

Since I’m writing this on December 20th, I don’t know what will have happened by the time this is published on the 27th of this month. I’ll just hope for the best.

However, disasters have been predicted for many years and we’re still here. The most recent forecast of the world ending was for September 23, 2017. It didn’t happen. Neither have any of the other dire predictions. Unless I missed something, we are still here.

Winter Solstice means the shortest day of the year, so it’s getting colder. Many people believe that’s because Earth is farther from the sun in winter. Not true. At this season we are actually closer to the sun than in summer. But our orbital lean of 23 ½ degrees means that sunlight simply strikes the northern hemisphere at a shallower angle so that it doesn’t warm the air or earth as well. After the 21st, we’ll be receiving more hours of sunlight and it’ll slowly grow warmer.

Mankind has celebrated the New Year at least as far back as the Babylonians 4000 years ago. But, their celebration was on the day of the first new moon after the Vernal Equinox (the first day of spring). Finally, after much governmental tinkering with the calendar, the Roman senate in 153 B.C. officially set January 1st as the beginning of the New Year.

A baby as the symbol of the New Year began in Greece about 600 B.C. and has continued in spite of early prohibitions by the early Christian Church because of its pagan origins.

New Year’s plant and animal traditions abound, and have their primitive roots in our globe’s fields and forests long before they were domesticated as crops. 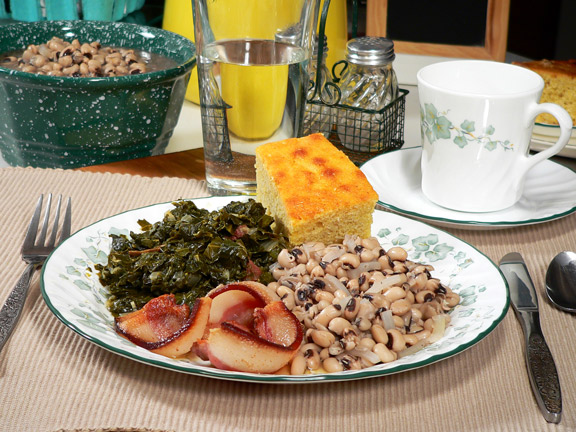 Here in East Texas, as in much of the south, a New Year’s meal of ham or hog jowls, black-eyed peas, and greens is served. The hog is considered lucky food for us – but not for porkers – because pigs symbolize prosperity and a full belly. Legumes (peas and beans) have long been considered good luck in many cultures.

Cabbage is believed to bring wealth. Rice swells during cooking and is a harbinger of growing good fortune.

The Dutch bake a cake with a coin inside. Whoever finds it in their slice will be granted good fortune in the year to come. They also believe that anything circular or formed in a ring is good luck. As a result, donuts are served on New Year’s Day.

In Venezuela people wear yellow underwear on New Year’s Day, eat 12 grapes at midnight, and write wishes on a piece of paper that is then burned. Hmmm! Well, whatever.

In contrast, some folks believe that eating fowl on New Year’s Day will bring bad luck because these birds scratch backward for their food and have to “scratch for a living,” a phrase associated with poverty.

Whatever else, the New Year in our fields and forests ought to represent for all of us an opportunity to forget past mistakes and begin anew.

Optimism, not pessimism ought to be the order of the day. We should arise each morning vowing that we will make our own future. It’s up to us to decide whether we will be happy or miserable. Even in the grimmest situations, there is always a ray of sunlight if you look for it.

Happy New Year from my fields and forest to all of you.