The flash of brilliant orange and black zipping across our yard proved to be a bird a bit smaller than a robin. It spread its wings to flare for landing, slowing its flight speed and dropping to rest on – our hummingbird feeder! A male Baltimore oriole had dropped in for a sip of creature comfort. But, just to set the record straight, we aren’t spiking our hummer feeder with liquor. It’s just filled with a sugary nectar solution purchased locally. Inebriated hummers and orioles are just too much to cope with.

Impressive is an understatement when applied to a male Baltimore oriole. With a black head, wings and tail, the bird sports a brilliant orange breast and, uh, rump. (Sorry about that, but it’s common “birder” terminology.) Its wings have a bright white bar across them with white edges on some wing feathers. Black eyes and a sharp, gray beak add to its decoration. There is no other bird in the area that looks similar. Although tanagers are in the same family, only the western tanager is colored somewhat like the Baltimore oriole. However, it has a red head. The scarlet and summer tanagers are both bright birds similar in size to the orioles, but they are mostly red. Females are much more subdued, with olive above and yellow below. Orioles are in the same family – Icteridae – with blackbirds and meadowlarks. They prefer open deciduous woodlands, but frequently visit backyards too. 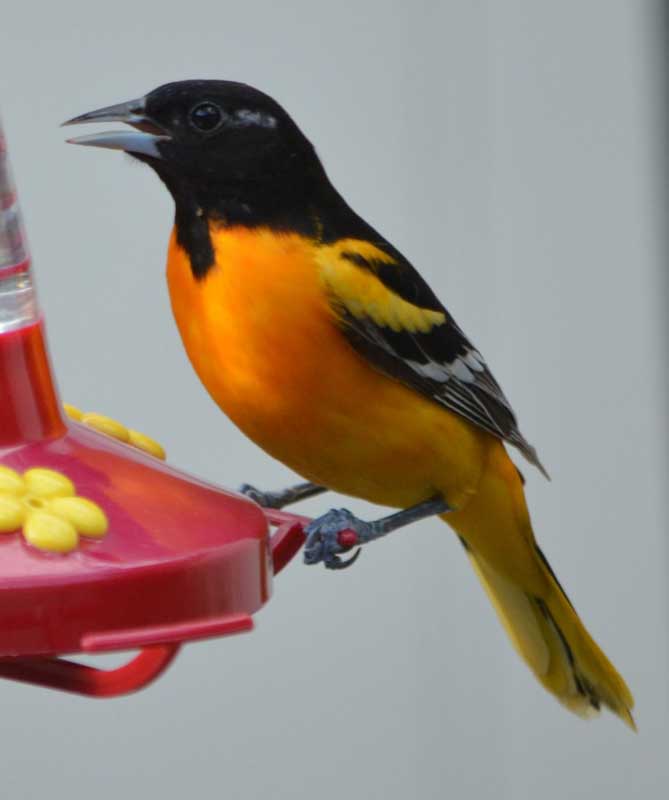 Photo by Doug Gibson
A male Baltimore oriole at a hummingbird feeder.

There are seven species of orioles found in Texas, but only two are usually seen locally - the Baltimore and orchard orioles. The orchard oriole is a bit larger than its Baltimore relatives and spends the entire summer here, in contrast to the brief, usually week-long migration of its brighter counterpart. Male orchard orioles are chestnut and black. Females and young are olive on top and yellow on their breasts, much less conspicuous than the male.

The visit to our hummingbird feeder was no fluke. Orioles eat not only bugs, nuts and seeds, but also dote on fruit and flower nectar. Special oriole feeders are available from suppliers with larger feeding ports and stronger perches than traditional hummingbird feeders. Some people string orange halves on a coat hanger and hang them out for orioles, or nail them to a post. Many birders claim the favorite food of orioles is grape jelly or grape jelly diluted with a little water. Others use apple jelly and/or apple slices to lure in these brilliant neighbors. A woman in Appleby says she feeds orchard orioles all summer.

If you want to make your own nectar for orioles or hummingbirds, mix either 1 part white sugar to 4 parts water, or 1 part sugar to 6 parts water. Boil the solution for 1-2 minutes to kill bacteria and mold spores. Let it cool and place it in your feeder. There is some dispute over the use of artificial coloring in the sugar water. Some say it can be harmful to birds, although the commercial nectars are usually colored red and claim to be harmless.

Baltimore orioles prefer caterpillars and often eat pest species, including tent caterpillars. According to Sarah Kennedy of the University of Michigan, they eat large, fuzzy or spiny larvae by crushing them against a branch or twig to pop them open, avoiding the prickles. 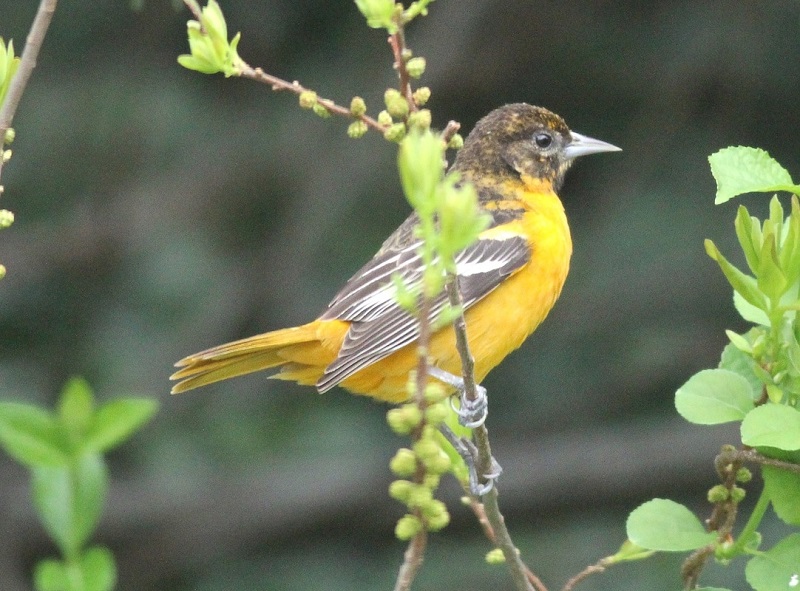 Sad to say, Baltimore orioles are only in East Texas for a week or so during April or May as they pass through after a long, hazardous trip from their wintering grounds on the Yucatan peninsula. Then they briefly appear again from August to September on their way back south again.

Baltimore orioles usually have only one batch of young a year, laying 4 or 5 eggs that hatch in about 12 days. After 12-14 days, the young leave the nest. The nest is typically a pouch or suspended basket-like structure made of grass, hair, yarn, string, and even grapevine bark. In the south, Spanish moss may be used for construction materials. The interior is lined with hair, wool, fine grasses, or other soft fibers.

This column should answer the concerns of a local reader who reported in “Sound Off” that their hummer feeder had recently received an oriole visitor, and alleviate any concern about danger to the bird from drinking nectar.

If you are lucky enough to see either the Baltimore or orchard oriole at your feeder, I would like to hear from you to determine where they are being observed. This is a great time of year to observe birds. They are very involved this time of the year in courtship, breeding, nest building, and singing. Their activity makes it easier to spot them.

Enjoy the fields and forests. They represent a gradually diminishing recreational and biological resource as urban sprawl and expanding agriculture threaten them and their varied wildlife.