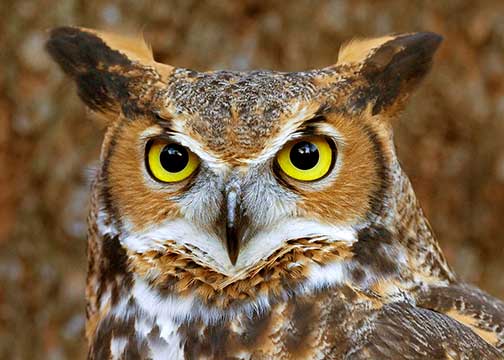 king-animal.blogspot.com
The flat face and piercing eyes of this Great-horned owl are probably the last thing their prey sees before becoming a meal.

Years ago, as I was hiking at night up a ridge in the foothills of the San Gabriel Mountains in Southern California, I saw a Great-horned owl silhouetted against the sky perched on the top of an old telephone pole, only about 40 yards away. Fascinated, I approached the bird, curious to see how it would respond to me. When I closed to about 20 yards it gracefully opened its wings and stepped off the pole, soaring directly toward me. Its outstretched wings didn’t move. They were simply extended as the owl glided closer. Since I knew owls don’t attack and eat people, at first, I was simply intrigued. But without any variance, it rapidly descended directly toward me. My heart began to pound. It was headed directly toward my face! As it closed to about five feet, I dropped to a crouch and it soared, without a sound, past my head and away across the ridge. I had no idea then or now what it had on its mind. Probably mere curiosity, but maybe it had a warped sense of humor and flew away chuckling silently to itself about the fear it had caused me.

Owls are truly amazing birds of prey. Mostly nocturnal, with flat faces and piercing eyes facing the front, owls are well adapted to their lifestyle. Their faces are surrounded by feathers in a characteristic facial disk that sets them apart from other birds. Since their eyes, like ours, are placed in the front of their skull, they have stereoscopic vision that helps them determine the distance to their prey. Other birds have side-mounted eyes and must turn their heads to the side to see clearly to the front. Owls can turn their heads 135 degrees each way, allowing their head to rotate in what seems an anatomically impossible way. An old English myth held that if you walk around an owl in a tree, it will keep watching you, rotating its head until its neck breaks!

Anyone looking at an owl’s face is immediately struck by how large their eyes are. Huge, you might say. Extremely sensitive to light with very large pupils, owls can see far better at night then the prey they hunt. They can also move the feathers on their facial disc to help direct more light toward their eyes.

Complimenting their eyesight, an owl’s ears are placed unevenly on each side of its head, and feathers around the ear openings help to focus sound waves. This means that sounds strike each ear at a different time as they listen to a potential meal of fresh mouse. Processing the time difference in the arrival of sound in each ear enables the owl to accurately determine the distance to its target as it dives toward its unsuspecting prey. 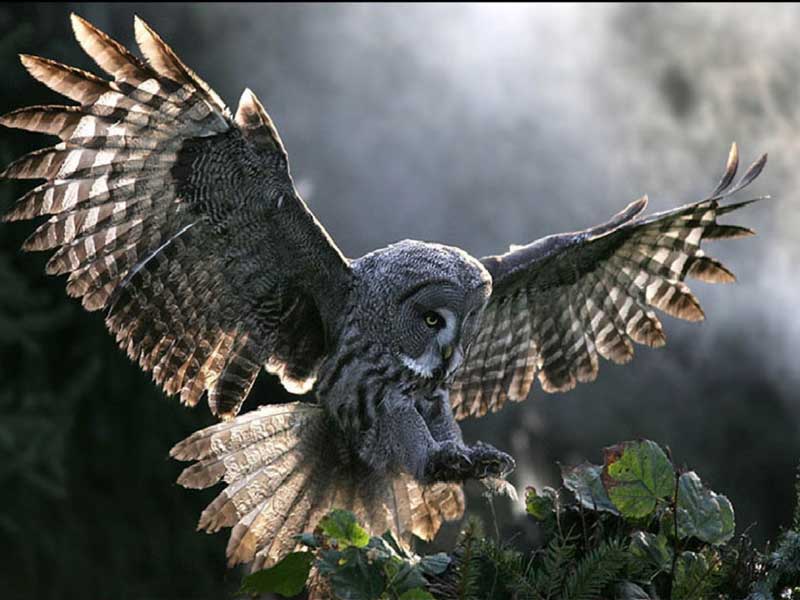 From www.fondos10.net
Able to fly virtually in silence, owls are masters at sneaking up on their prey.

A most amazing and somewhat unnerving ability – to me especially, as that owl swooped inches over my head – is their silent flight, which has to do with comb-like structures on the leading edge of their flight feathers, and delicate fringes on their trailing edges. Other feathers on their wings and legs are downy and absorb sound. Most other birds can be heard by the air passing over their feathers as they fly. An owl is virtually silent; truly a stealth fighter.

But as silent as their flight may be, the calls, cries, and screams of some owls can stand the short hair up on your neck. The screech owl and the barred owl, two of these night hunters common in East Texas, have really strange and somewhat creepy calls. However, if they sound spooky to me, I wonder what Minnie Mouse and her little mouselets think when the quiet of the night is suddenly broken by their call. Oh, the stories mouse mothers must tell their offspring! “Stop squirming around! Settle down and be quiet! If you don’t look out the owl will swoop down and eat you!”

Sorry about assigning human behavior and characteristics to animals. It’s just one of my many weaknesses and I thoroughly enjoy it. It’s fun and it irritates scientific purists – another reason I like to do it.

Are owls truly wise? Are they prophetic? How about evil and harbingers of death or predictors of victory in war? If an owl “calls your name” what will happen to you? Find out in two weeks as Part Two of the owl story unfolds.