Their name comes from “pacane,” an Indian word meaning “nut to be cracked with a rock.” My dictionary lists the pronunciation of pecan two ways: pee-CAHN and pee-CAN (as in tin can). But, I’ve been warned that calling them pee-CANS in Texas will immediately tell natives that you “ain’t from around here.” And you’re probably a suspicious character to boot. Or worse, a Yankee. However you pronounce the word, they occupy a warm spot in my heart. 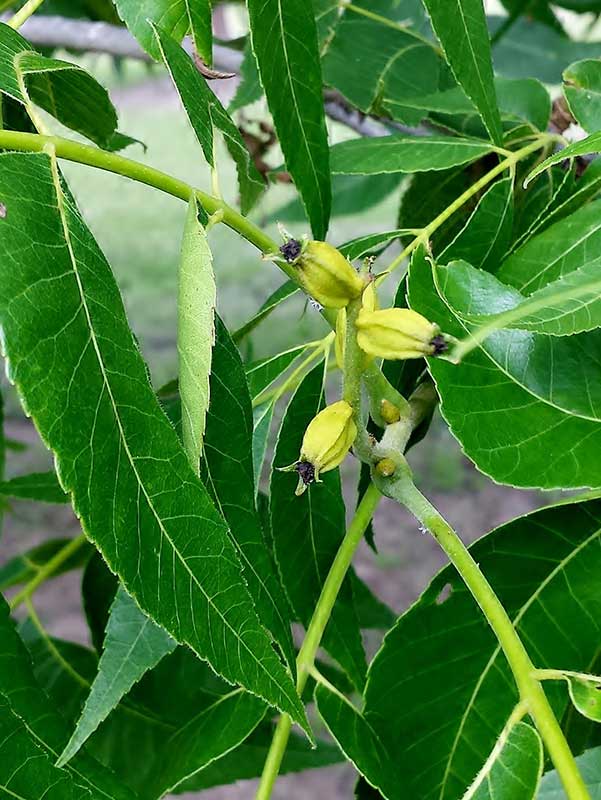 Photo by Paul H. Risk
Tiny ¾ inch pecans are already forming on our trees. And I’m sure the crows and squirrels are watching and planning their larcenous raids.

Pecan is the Texas State tree, officially designated by the legislature in 1919. Governor James Hogg was so partial to them that he asked that a pecan tree be planted at his grave and the nuts distributed to “the plain folks.” It is said that many a pecan farmer got his start from the bounty of the two trees planted at the head of his grave. Incidentally, a popular Texas myth says that Governor Hogg had two daughters, naming them Ima and Ura. Actually, there never was a Ura Hogg, but he did name one child Ima. Ladies, if you’re not happy with the name your parents gave you, just think of poor Ima Hogg.

Pecans, a type of hickory, are native to the United States and parts of Mexico. Fossil remains indicate they even grew in prehistoric times 64 million years ago. As far back in history as the 1520s, Cabeza de Vaca, the Spanish explorer of parts of Florida, Mexico and Texas and survivor of a Galveston Island shipwreck during that period, wrote that the local Indians used pecans as a staple in their diet, grinding them into a nutritious nut meal. By the way, Cabeza de Vaca’s name translates into English as “head of a cow.” How’s that for a name?

Pecan trees favor moist environments and grew wild and prolifically along many stream banks and river bottoms from Iowa and Indiana into Texas and Mexico long before European settlement. Fast growing, they often attain a height of 75–100 feet. Highly nutritious, pecans are rich in protein, B-vitamins, and minerals. Research indicates that eating pecans can also lower blood cholesterol levels.

Both George Washington and Thomas Jefferson grew pecan trees on their estates, and Washington was said to munch on them constantly. It was the French however, who upon settling in the New Orleans area, elevated the pecan to its highest culinary level, creating both pecan pie and pralines. Some people pronounce the latter as “PRAW-leens,” others say “PRAY-leens.” In my case, a small piece of either is guaranteed to control my sugar craving for a substantial time, and no Christmas or Thanksgiving dinner in Texas is complete without some pee-CAHN “pah.”

Writing about the Texas Revolution, Noah Smithwick said that while surrounded by the enemy, the Texans, in a battle preceding the Alamo, took shelter in a pecan grove. As canon shot raked through the trees, the branches were “raining a shower of nuts down upon us… I saw men picking them up and eating them with as little apparent concern as if they were being shaken down by a norther.”

This year our pecan trees have produced copious blossoms and are now covered with tiny developing pecan “drupes,” the technical name of pecan fruit. I just call them nuts. Call them what you will, I’m absolutely sure that the crow and squirrel telegraph networks have already spread the word and by fall, those miserable feathered and furry bandits will come from all over East Texas to rob me of my rightful bounty.

So, as I contemplate my potential pecan harvest and the resulting pies, I’m also devising numerous diabolical ways to win the coming crow/squirrel battles. I’m not sure why I even try. Virtually every season the beaked and buck-toothed bandits marshal their forces and rob me blind. Guess we’ll probably buy pecans again, but they sell at prices almost as high as gold. Ah, Texas. Maybe this year I’ll win the battle. I still have several months to come up with a solution.