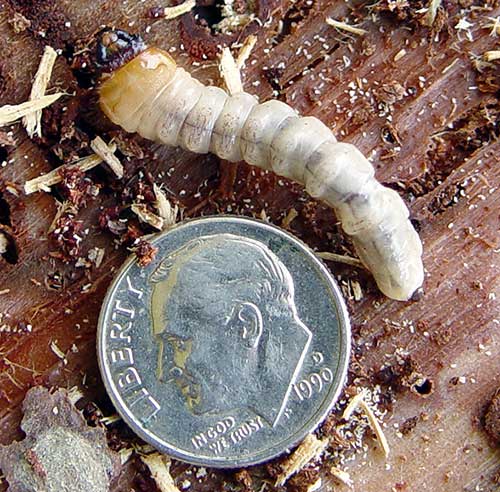 Photo by Paul H. Risk
A fat pine sawyer beetle larva makes a filling snack for birds lucky enough to get one. The dime will give you some idea of the size.

Now, wait a minute. A beetle larva? You’re telling me beetle larvae make audible sounds? They sure do. Woodpeckers are well known for their hearing and probably learned it from their moms. They watched as adults perched on the side of a tree, turned their head from side to side, moved around a bit, and then began to furiously peck away at the tree bark. Surprise, surprise, immediately they speared a luscious insect larva with their long, barbed tongue and gulped it down. How did they find it? You guessed it. They heard it.

Now let’s go back to the Rain-Bird sprinkler. We’ve all heard their rhythmic swish, swish, swish. So, it should come as no surprise that most of us don’t have to puzzle and puzzle until our puzzler hurts to identify them by sound alone. But, recently a friend of mine called to say she and her husband could hear Rain-Birds operating inside a pine tree in their front yard. I’m sure they didn’t really believe that. But, they were convinced that was what their tree sounded like. So, I visited their house to listen and sure enough, Rain-Birds swish swishing inside their tree!

First of all, let me explain that their pine tree was infested with tiny beetles, either southern pine bark beetles, Ips beetles, or both. It was a dying tree. Woodpeckers were making continuous pilgrimages to the tree for larva fast food snacks. Other insects that were infesting the tree were pine sawyer beetles, and their larvae were the cause of the strange sounds.

Pine sawyers, also called longhorn beetles, are secondary pine pests, arriving after a tree is weakened by disease, lightning, or other beetles. They lay their eggs under the tree’s bark, and after hatching, their larvae begin eating the cambium, or living tissue layer, just under the bark. Their ravages leave tunnels stuffed with wood fiber and droppings called frass. The larvae rapidly gain in size and appetite, and with growth comes larger mandibles, the jaws they use to munch their lunch. The surprise is that someone standing near an infested tree can hear their chewing sounds. And yes, they sound like – Rain-Bird sprinklers at about the volume you’d hear if your neighbor several houses away was watering their lawn. In a forest filled with infested trees, the beetle concert is very distinct and easily heard. 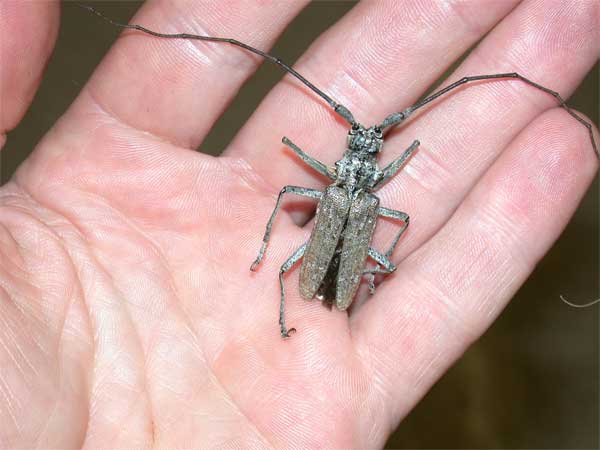 Photo courtesy of the University of Wisconsin Department of Entomology
This adult pine sawyer beetle easily shows why they are also called longhorn beetles.

So why are they called pine sawyers? Because when they were named, most woodsy people thought they sounded like the swish, swish, swish a cross-cut saw makes in felling trees.

Older larvae are a couple of inches long and almost as big around as your little finger. They are sometimes called roundhead larvae, a title that’s easy to understand from their picture. Adult beetles are about the same length, with long curved antennae about twice the length of their body. As the larvae reach maturity they change to a pupa and continue to develop under the tree bark until they become adults. The adults then chew their way through the bark and fly away to start the whole cycle over again.

So, the next time you hear Rain-Birds operating in your piney woods neighborhood but don’t see any, take a look around. If you see dead and dying pines, you may be listening to insect sawyers at work finishing off another tree.

Here is a recording of the pine sawyer larvae performing. Cliff Shackleford with Texas Parks and Wildlife helped me capture it.