Spring is poison ivy time. I haven’t written about it for a number of years, so it’s time to do it again. 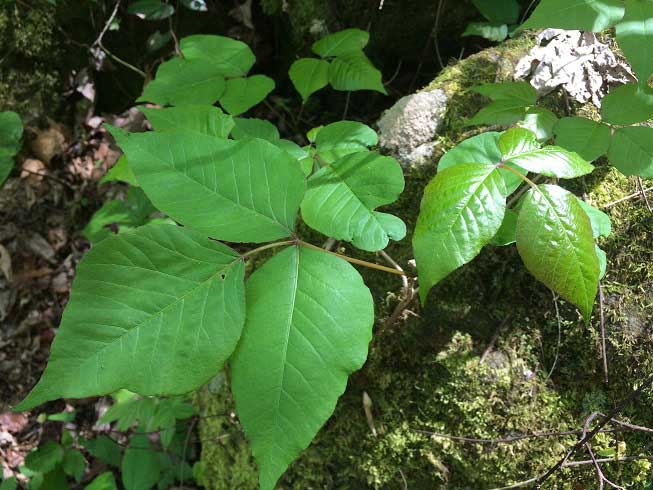 Photo from blog.outdoorherbivore.com
Poison ivy grows as a climbing vine, a shrub or spreading ground cover.

A climbing vine, shrub, or spreading ground cover with leaves in threes, poison ivy is at its nasty worst in spring. Not just found in East Texas, it occurs throughout most of the Eastern U.S. Captain John Smith in 1609 wrote to England that “the poisonous weed… little different from our English Yvie… causeth reddness, itchinge and lastly blisters.”

Experts estimate that nearly 80% of us are allergic to poison ivy’s juice, but that immunity comes and goes, so don’t depend on prior resistance to keep you safe. A student of mine, overcome by testosterone and bravado, rubbed it all over his face on a field trip to demonstrate to his shocked classmates that he was immune. Three days later his face looked like a melon and his eyes were swelled shut. His hands and forearms were like hams with smallpox. The good news is that as we age, our sensitivity often grows less.

Related to poison oak and poison sumac, poison ivy contains an oily chemical called urushiol, so active that only 1/1000 of a milligram will start a rash on a sensitive person. That’s such a tiny amount you can’t see it without magnification! Virtually every part of the plant is poisonous, including roots, seeds, flowers, and berries, and all it takes to release urushiol is for an insect to feed on it, a person or other animal to brush against it or cut it in some way.

You can also get poison ivy from smoke carrying vaporized urushiol from burning plants, handling pets that have run through it, or ivy resin left on clothes, boots, and garden tools. Under dry conditions, plant resin on these items can form a crust beneath which the urushiol may remain active for years.

Within about three minutes after initial contact, the urushiol penetrates the skin and starts an allergic reaction that within 12-48 hours produces reddening, bumps, serum filled blisters, and a maddening itch.

Many people believe that scratching open the fluid-filled blisters spreads the rash, and getting the serum on another person gives them poison ivy too. That’s not true. The only way to “break out” is from contact with the plant juice. Beginning on thinner skin and more heavily contaminated areas first and later on thicker more lightly coated spots and areas that were contaminated later, it appears to magically spread. 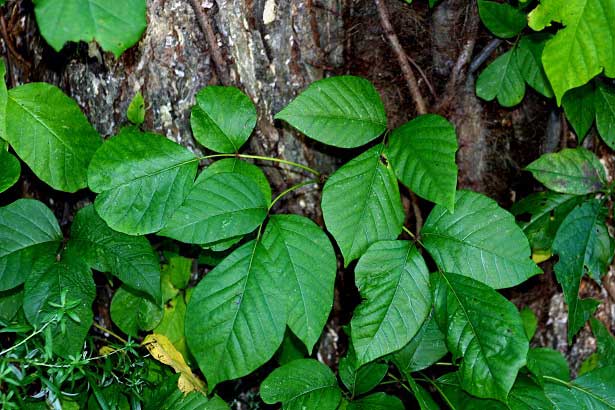 Photo from bio.brandeis.edu
Poison ivy is easily recognized by the 3-leaf configuration of its vines.

Here’s how it really happens. Imagine that you walk through poison ivy and get the juice on your boots or pants and transfer some to your hand. Then you scratch your cheek, wipe your brow, swat a mosquito on your arm, rub your neck, or touch a private part of your anatomy going to the bathroom. Returning home, you remove your clothes and footgear, take a shower and later, throw your clothing in the laundry and put your boots away, re-contaminating your hands and starting new patches. A few days later you get around to doing the laundry and touch your “juicy” clothes again. The rash starts appearing and itching within a couple of days after that first contact and keeps developing sequentially on all those spots you touched later, giving the illusion of spreading from scratching.

There are barrier creams that can be applied before going outdoors making it harder for the ivy toxin to get to the skin. Wearing long pants and sleeves will also help protect you. Although there are pills that can immunize you, the process takes about 4 months, often has unpleasant side effects, and must be continued over a long period of time.

The best thing to do after contact is to thoroughly wash contaminated skin areas with soap and water. It won’t remove the urushiol that already penetrated your skin, but it will get rid of accumulations on the skin, and water tends to chemically deactivate it. Remember to put your clothes and boots away before you wash. Take a shower, not a tub bath, because the urushiol can float on the bath water and coat you like an Easter egg as you get out! But, if worse comes to worst, you may itch a little less if you use a topical steroid cream such as Lanacort or Cortaid on the rash. Oral antihistamines such as Benadryl will also help a bit. In cases where large areas of the body are affected, a fever develops, or the face, arms, and genitals swell, see a physician who may administer more potent corticosteroids. In most cases, even without treatment, you’ll heal up after a “mere” two or three weeks of utter misery.

In any case, and to paraphrase what Capt. Smith might say, may your woods wanderings be fruitful and uplifting and may you find success in avoiding “ye itchye weed” and its “lastly blisters.”