A pale green haze is covering the trees throughout our area. Buds, dormant through what we jokingly called winter this year, are swelling and bursting in preparation for spring’s sudden production of leaves. It’s a time of year I thoroughly enjoy, except that my grass is quietly chuckling and plotting a race to the sky. Nonstop mowing is about to rear its ugly head for another seven or eight months. 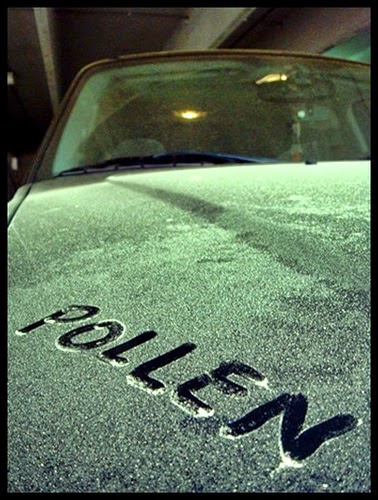 Another harbinger of spring is yellow “dust.” It’s easiest to see on dark cars and other flat surfaces. During and after rain it runs golden in rivulets and floats in puddles and ponds. Occasionally, a puff of yellow “smoke” blows off of a pine tree, drifting on the breeze. Take a close look at the ends of pine branches now and you’ll notice clusters of tiny pollen cones. At the slightest touch or vibration, they release clouds of yellow pollen, the male half of the two-way partnership required to produce seeds in the cones we usually associate with pines.

Although pines are the most noticeable source of pollen right now, they aren’t alone. Oaks, maples, and other hardwoods, as well as junipers (cedars) and cypresses are also involved, and most of the sniffing, sneezing and itchy eyes some of us are experiencing are due largely to their pollen. Interestingly, very few people are allergic to pine pollen.

Most of us have looked into a flower and noticed that there are tiny oval structures called anthers on graceful stalks inside and that they are often covered with pollen. When a grain of pollen falls on the moist stigma – the female reproductive structure in the middle of the flower – the grain swells and bursts. A tube emerges that grows downward inside the stigma and ultimately makes contact with a waiting female cell that will form a seed.

In many flowering plants bees provide major assistance in pollen distribution as they wend their way around seeking sweet nectar and pollen to take back to their nests. As they blunder around in a flower, pollen sticks to their fuzzy bodies and is transferred to the stigma. However, the trees I’ve already mentioned are largely wind pollinated. 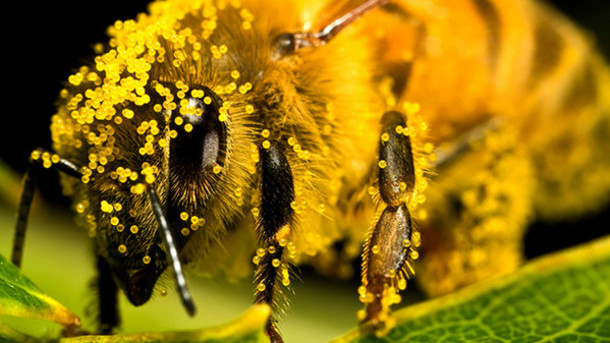 Photo courtesy of www.illumanapiary.com
This bee is covered in pollen, which it will distribute to every other flower it visits.

When allergy-causing pollen grains enter the eyes, nose and lungs, they release a protein that causes a two-step process resulting in the production of histamines and other substances. These chemicals produce the typical allergic reaction of red, itchy eyes, runny nose, scratchy throat, sneezing, coughing, sinus congestion, and sometimes asthma attacks. So off we run to the drug store to get anti-histamines. For most of us, the over-the-counter allergy drugs are enough, but some people have to undergo a long series of desensitizing injections under the care of a physician. In rare cases, pollen allergies can be life threatening.

Is pollen edible? Some think so. Pollen collected from bees is one of the oldest known food supplements, dating back to ancient Egypt and China. In a number of cultures, it has been thought to prolong youth and has been referred to as the “ambrosia of the gods.” Hippocrates, the ancient Greek physician sometimes referred to as the father of human medicine, used both honey and pollen as healing agents. 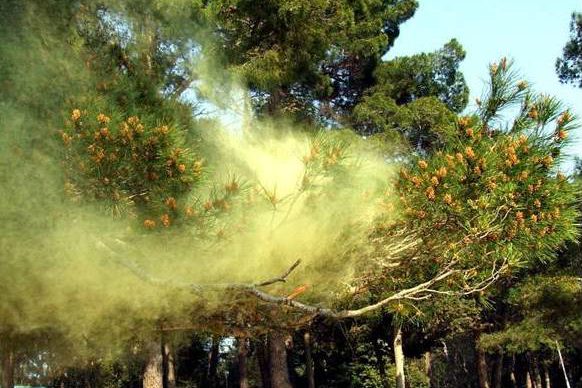 Photo courtesy of The Asthma Center, www.asthmacenter.com
Clouds of pollen float away from pine trees at the slightest breeze or touch.

Pollen contains a complex mixture of antioxidants including vitamins A, C, and E, lycopene, selenium, and plant pigments called flavonoids, along with amino acids and enzymes. Even today there are those who encourage the use of pollen as a health food. Their claims include usefulness in weight control, allergy relief, greater strength, improved sexual function, slowed aging, and improving the immune system. However, reputable scientific studies are lacking to support most of these grandiose claims. Nevertheless, many health food stores and some pharmacies sell bee products including pollen capsules and tablets. Incidentally, I’m not recommending that you rush out to buy any of these preparations without consulting with your physician. People allergic to bee stings should be especially careful not to use these products without the guidance of a physician.

But, the yellow rain and bursting buds are a clear indication that spring is upon us, a season of comfortable temperatures, rebirth, rejuvenation, and joy. Enjoy it while it’s here. Soon it’ll be blistering hot summer again.