Billy Bob the coyote, called B.B. by those who knew him well, in honor of his assumed brain size, awoke hungry. He, like his cousin Wiley, was not all that bright. Either he had the I.Q. of Odie the dog in the comic strip “Garfield,” or else his Mama never got around to teaching him an important lesson about porcupines. 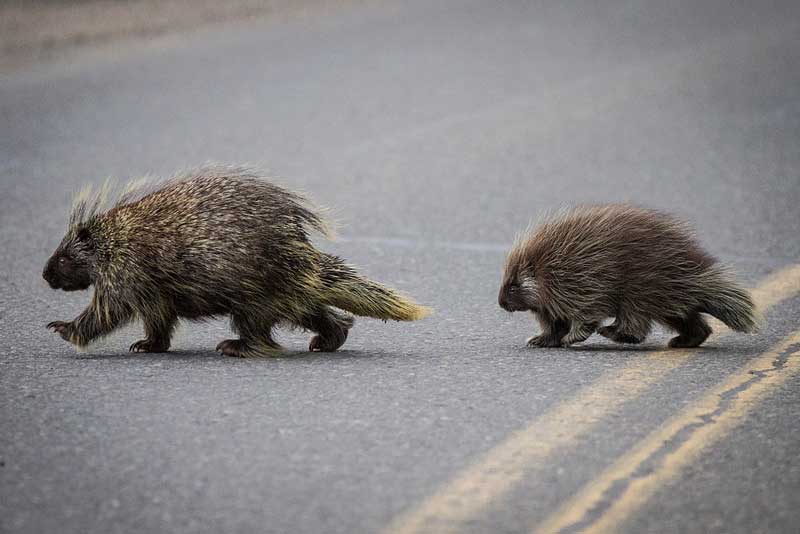 Wikipedia Commons
Two prickly porcupines crossing a road – dangerous even for a porky.

As B.B.’s approach brought him slowly closer, his planned meal took no action other than to turn his rear end toward the coyote, sweeping his tail back and forth. So, B.B. launched a savage attack, grasping his planned supper in his jaws. Intense pain shot through his mouth and head. Dropping the obviously not-so-helpless critter like a hot potato, he flung his head from side to side in a vain attempt to ease the terrible pain. To his astonishment, he found that his tongue, gums, nose, and muzzle were bristling with embedded quills. Every time he tried to close his mouth, they sank deeper into his flesh. Pawing at his mouth only made things worse.

But, the coyote’s problems had only begun. The sharp ends of the porcupine’s quills are barbed, and every muscle movement caused them to move deeper. Neither eating nor drinking was possible for B.B., and the latter was most critical. He tried to drink from a nearby stream, but his quill-impaled tongue could not lap. It was swelling and becoming more painful with every passing hour. Still hungry, B.B. had no possibility of getting a meal. To make matters worse, the quills had carried bacteria into his flesh and almost immediately, each penetrating wound was becoming the focal point of a developing infection, causing a raging fever and increasing B.B.’s thirst. Within a few days, B.B. died a slow death from the combined effects of dehydration and infection.

Veterinarians are occasionally called upon to treat dogs that make the mistake of attacking porcupines. The quills are not easy to remove and often require a pair of pliers and a firm grip to extract them, a painful process without anesthetic.

Porcupines have coarse fur or hair intermixed with unbelievably sharp, rigid quills that are only loosely attached at the host end. When concerned about a possible attack, a porcupine usually erects its quills – kind of fluffs up – and keeps its tail toward the assailant while swishing it back and forth. An incautious sniff at that flailing tail results, at the least, in a nose full of quills. Even that minimal assault can be life threatening.

Porcupines are pretty docile, and are not walking missile launchers. Contrary to popular mythology, they cannot throw or shoot quills. Vegetarians, they sometimes do extensive damage to forest trees by eating the inner bark, particularly of pines.

In survival schools I’ve taught about these pudgy, edible little animals. First, they are slow. On the ground, they’re easy to run down and club. Not quill-covered on their belly, they can be carefully rolled over and skinned. Edible yes, but I’ve tasted some truly awful porcupines tasting like pine pitch!

Bobcats and cougars eat porcupines, but with care. They reach under them, flip them over, and attack their furry but not quill-covered underside.

There are several lessons in this little story. First, most animals, including humans, have means to defend themselves. Second, most animals learn to avoid potentially dangerous co-inhabitants in the fields and forests. Third, the consequences of erroneous attacks can be terrible to behold. I’m reminded of a comment after the Pearl Harbor attack supposedly attributed to Isoruku Yamamoto, Fleet Admiral and Commander-in-Chief of the Imperial Japanese Navy during World War II who may have said, “I fear all we have done is to awaken a sleeping giant and fill him with a terrible resolve.” Sleepy porcupines are in the same category.