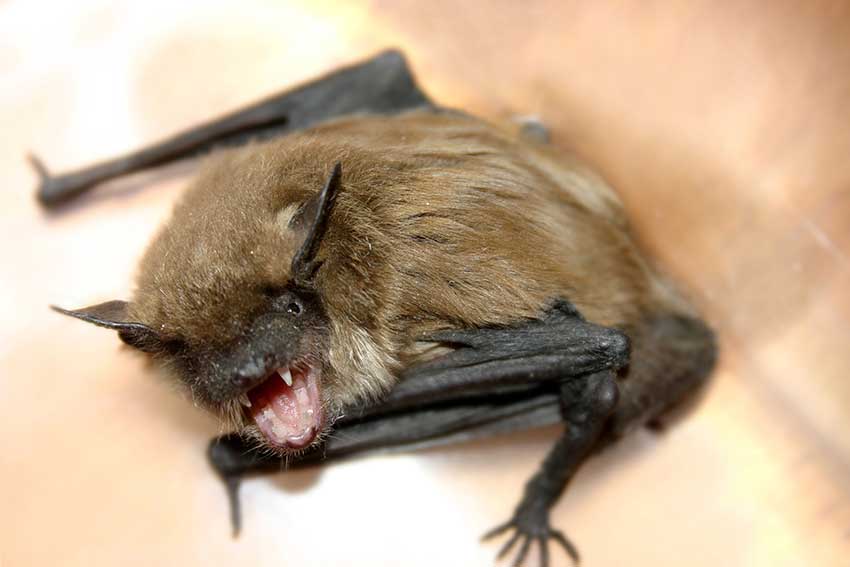 Photo by Michelle Hamel
Bats are one of the most likely wild animals to be rabid.

Rabies is a disease usually found in wild animals but it can be transmitted to domestic mammals and humans. In the United States human rabies is extremely rare, primarily due to the success of domestic pet immunization and the availability of vaccine to treat bite victims. In the fields and forests, it is most commonly found in raccoons, skunks, foxes, coyotes and bats.

A virus-caused disease, rabies attacks the brain and spinal cord causing mental confusion, anxiety, paralysis, speech impairment, agitation, hyperactivity, delirium, abnormal behavior, hallucinations, coma and death. The disease is also called hydrophobia (fear of water) because the victim craves water but paralyzed throat muscles make swallowing difficult or impossible. In humans the symptoms usually develop in three to twelve weeks and once they begin, the disease is almost always fatal within two to ten days. Rabies virus is not only found in the central nervous system tissue of the brain and spinal cord but it also enters the salivary glands of the infected animal and is usually transmitted to the victim by way of a bite.

Many years ago, rabies, or hydrophobia as it was also called then, was a disease that struck stark terror in the hearts of people. There was no vaccine to immunize pets and there no treatment for humans who were bitten by rabid animals. So-called “mad dogs” became aggressive, disoriented, walked with a stumbling gait and foamed at the mouth. This latter symptom was caused by progressive paralysis of the dog’s throat muscles, making it difficult for them to swallow. So, saliva dripped and frothed from their mouth. The sick dog often attacked anything that moved and their bite transferred rabies virus from their infected saliva into the wound. To be bitten by a rabid animal was usually a death sentence. 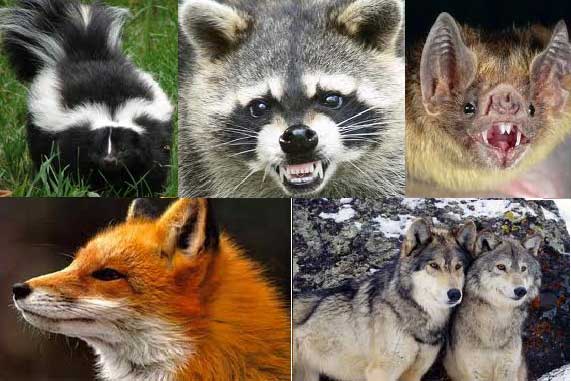 Photo courtesy of www.petsnmore.org
Many animals can carry rabies.

But, in 1886, Dr. Louis Pasteur successfully treated a 9-year-old boy who had been bitten and badly mauled by a rabid dog. His crude vaccine was prepared from the dried spinal cord tissue of rabies-infected rabbits. Drying over various periods of time progressively weakened or attenuated the virus in the rabbit spinal cord. The longer it was dried, the weaker the virus became. The boy was injected with the spinal cord vaccine beginning with killed virus and then progressively stronger doses over a period of 12 days. When he did not develop the disease the treatment’s success signaled the end of the hopeless fear of rabies and thousands of people flocked to Pasteur.

The original crude nerve tissue vaccine injections were extremely painful and sometimes caused rabies themselves. Since that time, however, modern vaccines have evolved. The post-bite injections are given into the deltoid muscle of the upper arm the same way flu shots are administered and are not particularly painful. There may be some soreness, redness or itching at the injection site, but none of the potentially life-threatening reactions noted in the past. Four or five shots are given one at a time every few days over a period of two to four weeks and the treatment’s success rate is virtually 100% if the series is started immediately after being bitten. However, the full round of shots is expensive, costing more than $1500.

Although rabies is usually transmitted in saliva by way of a bite, there are other ways as well. Body fluids from an infected animal coming into contact with the mucous membranes of the nose, eyes or mouth can also initiate the disease. Some of the rarest human rabies cases have been in patients who acquired the disease after receiving donated organ or corneal transplants from infected donors.

Even more unusual and frightening is the potential for airborne rabies. In 1956 and 1959 two cavers exploring a cave near Uvalde, Texas developed rabies and died. The cave is very damp and contains huge numbers of bats, although the two men claimed not to have been bitten by a bat. Subsequent investigations in the cave identified rabies virus in the air. Further research using test animals showed that rabies can, in fact, be acquired by inhaling airborne virus particles. As a result, avid cavers are urged to take pre-exposure preventative inoculations.

Rabies continues to be a real concern and something that we should all be educated about. In Part 2 of this article, I will examine in more detail the symptoms of rabies in wildlife, its incidence rate in wild animal populations, airdrops of rabies vaccine to immunize coyotes and the particular and unique danger from rabid bats.