Scorpions, creatures that scare most people into a tizzy, are found throughout Texas as well as other parts of the globe. Worldwide, there are over a thousand kinds. About twenty species have venom toxic enough to cause death.

Photo by Paul H. Risk
Striped scorpions are about 3" long, and are very common in Texas. But their sting is not deadly.

Fossilized scorpions 400 million years old have been found, and look nearly identical to their modern-day relatives. Some of these prehistoric old timers were up to three feet long; not something you’d want to meet in your backyard at night without a shotgun!

Scorpions were sacred and the subject of many beliefs in ancient Egypt, Greece, and Rome. One legend blames the great hunter Orion’s death on a scorpion’s sting. Both Orion and the scorpion (the constellation Scorpius) were placed in the night sky by the gods. But Orion is seen in the winter, and Scorpius in the summer months to keep them safely separated.

Scorpions are not insects, which always have six legs. They are relatives of spiders, and have eight legs. Female scorpions produce living young which ride around on their mother’s back for up to 15 days after birth. Eating insects, spiders, and small rodents, scorpions roam at night. A pair of pincers at their front end is used to grasp food but do not inject venom. Their venomous sting is on the tip of the tail, and is used to stun or kill prey. Unlike honeybees that lose their stinger after the first thrust, the scorpion’s sting remains attached, so its owner can sting multiple times.

An interesting fact is that scorpions glow greenish in ultraviolet light, something that collectors use to their advantage by hunting them at night with a portable black light.

Scorpion stings cause intense burning pain, minor swelling, numbness, and tingling. The pain usually goes away within an hour, leaving numbness and tingling that will ordinarily be gone within 24 hours. The venom, although it is a complex mixture of more than a dozen chemicals, produces no lasting tissue damage.

In rare instances if a person develops a serious reaction, pain radiates toward the body, becoming especially severe in the armpits or groin areas where lymph nodes are located. Feelings of anxiety may develop along with fever, sweating, chills, numbness, or swelling of the face, tongue, and throat, and pain or tightness in the chest or back. Confusion, coma, convulsions, and death may follow in rare cases.

In our area, scorpions are generally not something to greatly fear. Their sting, for most people, is as painful as a bee or wasp sting, but not life threatening. However, one man swore the pain was as intense as hitting himself on the thumb with a hammer! Placing a cool, moist cloth or an ice cube on the sting will reduce the pain a little. Some people apply a baking soda paste to the wound, and others take antihistamines and Tylenol to alleviate swelling and pain. The baking soda paste doesn’t really do anything. It’s just cooling. Using a Sawyer Extractor on the sting site – a suction device available in many outdoor and camping stores – is a very effective treatment. 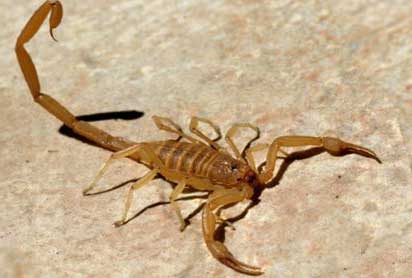 Univ. Nebraska Entomology Dept.
The straw-colored bark scorpion, found in Arizona, N. Mexico, and rarely in W. Texas, is about 2 1/2" long and has neurotoxic venom that can be fatal.

In the United States, only the straw-colored bark scorpion can inflict a fatal sting. But it is usually dangerous only to infants, small children, or hypersensitive people. Its venom is neurotoxic and can interfere with breathing and heartbeat. Found under the bark of dead trees and in wood or rock piles and crevices, they live in Arizona, adjacent areas of California, and New Mexico, and are also occasionally found in west Texas. Small, as scorpions run, bark scorpions are straw yellow in color and about two inches long.

Remember, it’s always a good idea to be careful walking at night. Don’t wander around bare-footed, even in the house. Scorpions have a limited sense of humor when you step on them. Since they like to hide in dark places, it’s wise to shake out your shoes and clothing before you dress or you might encounter a short-tempered claim jumper. “Ants in your pants” is one thing, but a scorpion in your britches is a whole ‘nother experience. As is true with so many of life’s problems, prevention is always the best cure in the fields, forests – and home.