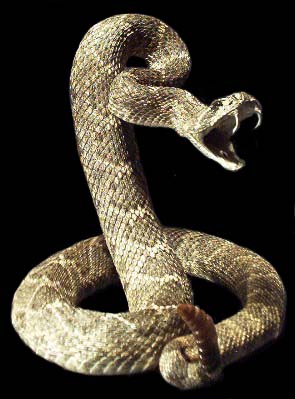 A rattlesnake’s fangs are retractable, hollow like a hypodermic needle, and very sharp. When they strike they open their mouth all the way, erect their fangs and “slap” the victim – all in a fraction of a second.

Pit viper bites usually cause immediate pain, swelling, and discoloration of the skin. Their venom, injected through two retractable, hollow fangs in the front of their mouth, dissolves and destroys blood cells and muscle tissue. HOWEVER, East Texas timber rattlesnake venom contains 80% neurotoxins that attack nerve cells, interfering with heartbeat and breathing. Their bite may be nearly painless but serious breathing and heartbeat problems can develop several hours later.

Contrary to popular myths, water moccasin and copperhead bites are not usually as serious as those from rattlesnakes, but their venom also produces immediate pain and swelling.

Place a snug constricting band above the bite – NEVER A TOURNIQUET! Venom travels through lymph and capillary vessels under the skin and a gauze band or a shoestring wrapped snugly enough to dent the skin is enough. You should be able to easily slip your finger under it. You are not trying to block major blood vessels – only lymph ducts and capillaries. Apply an extraction device over the fang marks and leave it in place for at least ten minutes. I recommend the Sawyer Extractor. Available at many sporting goods stores, it is excellent. NEVER cut into the bite site in an effort to remove venom.

Trying to suck the venom out with your mouth is useless and may cause an infection at the bite site. Contrary to popular beliefs, drawing venom out with your mouth when you have a sore or cavity in a tooth would not poison you, but your suction isn’t strong enough to do any good. Splint the bitten limb to prevent movement. Keep the victim calm and go to an emergency medical facility.

In the hospital, the physician may or may not administer antivenin. They will likely insert an intravenous line, administer pain medication, order blood work, and wait. If you have been bitten by a snake you think is a timber rattlesnake, be sure to tell the attending physician, and don’t be surprised if they don’t know the venom is neurotoxic.

These snakes are small red, yellow, and black banded and related to cobras. The red and yellow bands touch each other. “Red on yellow kill a fellow; red on black, venom lack.” They have short, fixed, non-hollow fangs in the front of their mouth. Their neurotoxic venom is worked into the wound by chewing. Most victims are children who pick up the snake. The bites often cause little or no pain, but are very rare. Only 1% of venomous snakebites in the U.S. are caused by coral snakes. 99% are from pit vipers.

Apply an extractor for up at least ten minutes. The fang punctures may appear in a horseshoe pattern. Wrap the affected limb with a crepe or Ace bandage beginning farthest from the body and spiraling upward across the bite, wrapping the entire limb. The bandage should be about as tight as that for a sprained ankle. Splint the limb and immediately transport the victim to an emergency facility. At the hospital the doctor will determine when to loosen the bandage, but not before an intravenous line is in place, since releasing the bandage will increase venom spread.

In all cases of snakebite:

Virtually all snake bites can be treated. It is important to get medical care quickly, but breakneck speed is not justified. You have more time than you think. If you are alone, apply the required field treatment and move slowly and deliberately to an emergency facility. If possible, use your cell phone to call for help.

About 50% of venomous snakebites are “dry.” No venom is injected. I don’t know why. Perhaps snakes have a warped sense of humor! In any case, use caution in the outdoors, carry a venom extractor, and know field treatment.