One of the most interesting, and in some cases, pestiferous insects is a moth that acts like a hummingbird. So, it’s often called a hummingbird moth or hawk moth. Technically, it’s a sphinx moth. 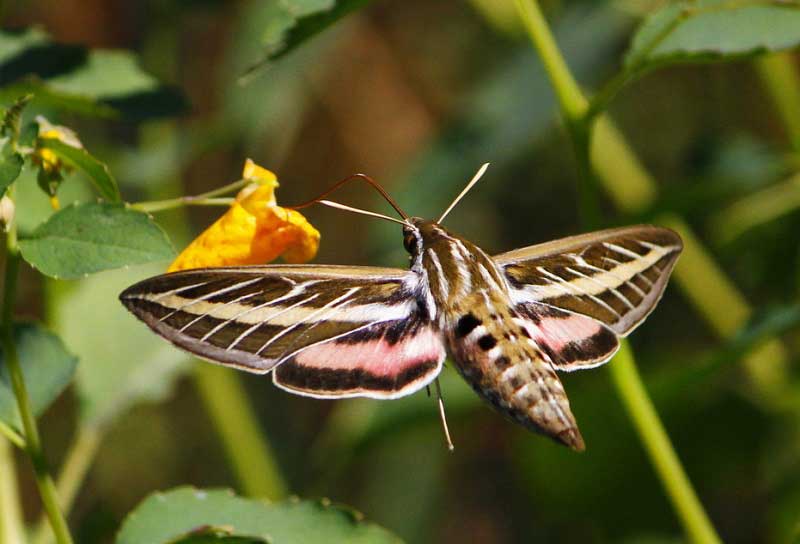 With long, narrow wings and a thick body pointed at the stern, these insects are often seen at dusk or after dark. Their wings beat so rapidly (15 to 55 beats per second) that they are just a blur, and they sound very much like a hummingbird. Sphinx moths can fly up, down, backward, forward, and from side-to-side like a small insect helicopter. Their rapid maneuvers and flight speed (up to 12 mph) not only helps them feed but also enables them to avoid predators.

Hovering in flight over a flower, they unfurl a long tube-like “tongue,” called a proboscis, insert it into the flower, and sip nectar. Think of it like in-flight refueling of an airplane but less complicated, because only the moth is moving. Except for swaying in the breeze, the “tanker” flower isn’t. Fighter pilots have a much harder job coordinating their flight during aerial refueling because both the donor and recipient planes are moving.

Although their aim is to get a sweet, liquid meal, they also provide an important pollination service. As they drink their floral meals pollen from the plant gets on their body and proboscis and is transferred to other flowers as the moth makes its rounds.

Most sphinx moths fly and feed in the evening or at night. In the southern parts of the U.S. many flowers release strong, sweet scents during the dusk and dark hours for the purpose of attracting nocturnal feeders. The warm, humid air is ideal for wafting the fragrances around. The moths are equipped with sensitive chemical detectors that enable them to follow the aroma to the nectar-rich flowers. Their long tongue allows them to probe deep into flowers to get to the nectar that is usually deep inside the bloom near its base. Both sphinx moths and hummingbirds burn a lot of energy hovering and need the high sucrose content found in plant nectar.

Although these moths are beautiful, some are real pests. If you’ve ever tried to grow tomatoes, you may have found that something is feeding on the leaves and stems, sometimes nearly defoliating the plant. It’s obviously caterpillar damage, but where is it? If you’re lucky you may finally find a long, fat, green caterpillar with hash marks on its sides. About threes inches in length with a long, sharp, threatening horn on their rear, these tomato hornworms are intimidating to predators and infuriating to gardeners. The horn, incidentally, is a bluff. It can’t hurt you. 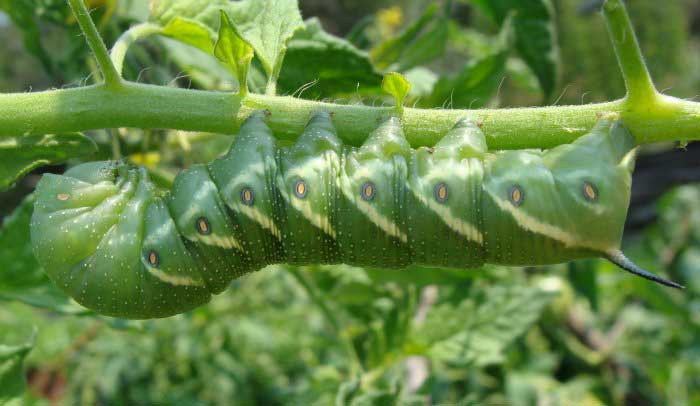 Photo by By Amanda Hill (Own work) [CC0], via Wikimedia Commons
A tomato hornworm showing its fake horn and eyespots.

Hornworms are camouflaged almost to perfection. I’ve spent long minutes trying to find them as they perch motionless along a stem, and I have often failed in my search. Their color and markings make them blend in perfectly with the tomato plant. The interesting thing is that they are the larva of a sphinx moth. That’s a little like the Ugly Duckling that becomes a beautiful swan as an adult.

Few things enrage my wife as quickly as finding one on our tomato plants. Personally, I just pick them off and slam them down on the ground making a very satisfying green splat. My wife, on the other hand, won’t touch them. She cuts them in half with a pair of scissors. Gross! Actually, I don’t know which technique is more grotesque. A gentler, but far less spectacular, method of getting rid of them is puffing a tomato worm insecticide dust on the plant.

But on the aesthetic side, pick a warm, fragrant evening and sit on a chair in your flower bed at dusk. The aromas will ease your stress, and if you’re lucky a big buzzing moth may appear and make the rounds of your plants. Most sphinx moths are not the cause of gardening devastation, so just take time to enjoy them. The key is time. Most of us are so into instant gratification that this exercise may over-tax the patience of most of my readers. But slow down, relax, and re-prioritize your life a bit. The fields and forests can be therapeutic and are a lot less expensive than a counselor, psychologist, or psychiatrist. Hmmmmm?