It seems as though I’m back to the theme that in Texas if it moves, it’ll bite or sting, and if it doesn’t move, it has thorns. That's an overstatement, but in the case of spiders it’s definitely true. All spiders are poisonous and can bite, but most have such small “fangs” they can't get them into a human, or if they do, the result is usually just an itchy bump. In East Texas only the black widow and brown recluse are of any real concern to people. Both are common here and it’s a good idea to avoid them when possible, and know what to do if you are bitten. 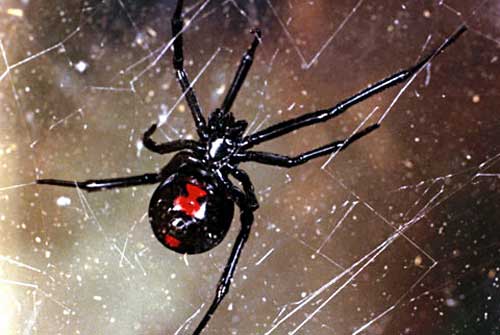 As a general rule, the black widow likes concealed, dark places and is found in wood piles, under rocks, around your house’s gutters, foundation, or wooden outdoor furniture, in water meter enclosures, and even in outdoor toilets where they often lurk just under the seat. It’s a good idea to get in the habit of swatting a stick around the underside before you sit down!

Black widows have long, shiny black legs and a glossy black body about ½ inch long with a large abdomen, usually marked with a red spot or hourglass underneath, although the shape of the red marking is quite variable. They generally have a tough, crude-looking, messy web on which they hang upside down. During World War II, black widow web was used for cross hairs in the Norden bomb sight!

Black widows are not fond of attention and tend to retreat or fold up their legs and play possum when disturbed or threatened. On the other hand, if they are touched or squeezed, they will certainly bite. The bite is usually not painful, but may feel like a pin prick, followed by little or no swelling. Their venom is neurotoxic, causing painful cramping and rigidity in the shoulders, back, chest, or abdomen in some people. Nausea, vomiting, headache, anxiety, and an increas in blood pressure may sometimes develop. In rare instances, children under five years of age or extremely sensitive adults may experience serious problems, including breathing difficulty and death. More often, the bite causes no problems and all that is required is to clean the bite site with soap and water, apply a cool compress and take aspirin or Tylenol. However, it’s a good idea to contact your doctor if you are bitten.

Found in similar areas as black widows, but also in closets, drawers, piles of newspapers, under furniture, and in clothes left on the floor or not worn for extended periods, the brown recluse is, as its name suggests, reclusive. It doesn’t want anything to do with you, and given a chance will run rapidly away. Most people are bitten by spiders concealed in clothing. Brown recluses are light tan to brown, with a body ¼ to ½ inch in length, long spindly legs, and a dark violin-shaped mark on their back with the neck of the violin pointing toward the spider’s abdomen. They have six eyes in three pairs. Most spiders have eight. 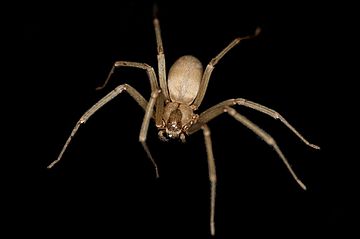 Wikipedia Commons
The brown recluse spider often hides in piles of clothes left on the floor.

The bite of a brown recluse spider can be a serious matter and should be treated by a physician. First aid includes washing the site with soap and water and applying a cool compress. Like the black widow, this spider’s bite feels like a little twinge or sting, but usually doesn’t produce any real pain. After a few hours, the bite develops a little blister surrounded by a reddened area. If not treated, the rash like area can get larger and the center will darken, harden, and die, producing a serious ulcerated wound that can be quite large and deep enough to expose the underlying muscle tissue, requiring surgery to repair. The bite of the brown recluse is seldom fatal, but the victim may feel as though they had the flu with fever, chills, and general aches. There may be nausea and vomiting and in rare instances damage to red blood cells and kidneys occurs. A physician may prescribe antibiotics to prevent infection, along with steroids and antihistamines to reduce tissue damage and stop itching and swelling. Recovery is slow, often requiring weeks.

Avoiding being bitten by black widow or brown recluse spiders is generally easy. Don’t reach into places you can’t clearly see, shake out clothes before putting them on, don’t let leaves or trash accumulate, clean regularly behind and under furniture, and wear gloves when taking wood off a pile. Finally, don’t worry yourself to death. Spiders aren’t waiting for you around every corner. They much prefer smaller game!