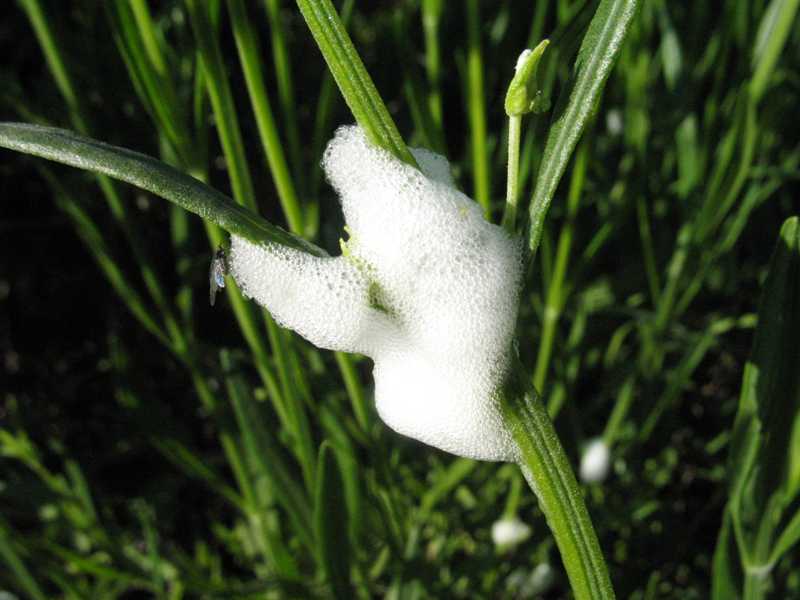 Photo courtesy of www.missouribotanicalgarden.org
The spittlebug creates a frothy “home” on plants to form a protective barrier of moisture.

Perhaps if I worked at it, I could think of a more distasteful word with which to start a column, but I sort of doubt it. But, let’s forge on. As a kid, I remember seeing globs of white, slimy foam on grasses, rushes, and other plants. It looked for all the world like – sorry about this – like someone wandering through the weeds had spat it out. Expectorant, saliva – spit! Apparently, I’m not alone, since the foam, now appearing throughout East Texas, is produced by tiny creatures related to aphids, whiteflies, leafhoppers, and cicadas, named – yep, you guessed it – spittlebugs.

At some point, because I was a boy and we were intrigued by “gross” things, I took a stick and poked around in the stuff. It turned out to be a watery, slippery mass of tiny bubbles, which I expected. The surprise came in seeing the spittle’s small resident squirm out of the way of my probe. Something was living in the foam. That “something” turned out to be a yellow or greenish little insect that looked a bit like a frog – and is also known as a froghopper. It was the source of the foam.

Spittlebugs or froghoppers are technically known as Homopterans. Like cicadas, aphids and their other relatives, they have piercing, sucking mouthparts that they insert into plants to withdraw juices from them. In one sense, they are like plant mosquitoes, but instead of attacking animals for blood, they go after plants for their nutritious sap. Hatching in the spring, and generally more numerous during rainy seasons and times of high humidity, the eggs produce nymphs that by the end of the season mature to brownish or black adults about a half inch long. These lay new eggs that over-winter to start the cycle again. 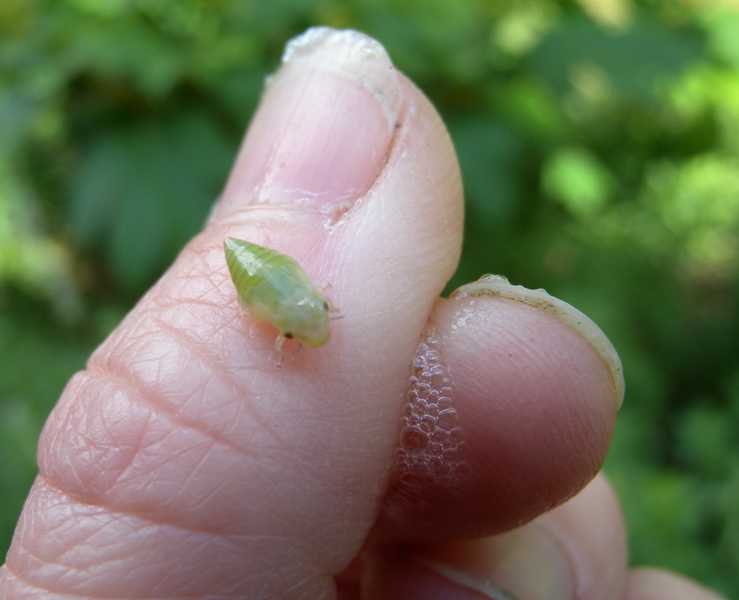 Photo courtesy of www.missouribotanicalgarden.org
These small nymphs produce the foamy blob and will eventually mature into brownish or black adults about a half inch long.

Spittlebugs occur not just in East Texas, but from the Pacific Northwest to California, up to the northeastern United States and south to the Carolinas. In other words, they live in most areas of our country. What we see inside the foam or “spittle” is the immature or nymph stage of the insect. They are very thin-skinned (kind of like some people I know, but in a different way) and because of that, they need protection from heat and dryness. To get that protection, they drink plant juices, use the nutrients for food, mix some of the water with a mucus-like substance and – this is the really gross part – blow bubbles out of their rear. Their tail end pumps up and down, and froth squirts out as though from a bellows. The bubbles form a protective barrier, not only against dehydration but some predators as well.

Curious they may be, but they can also be a problem for gardeners and commercial growers since they attack ornamental plants, strawberries, beans, and peas, and their intense feeding can cause weakened, stunted, and dwarfed plants. When infestations are heavy, they can cause mechanical harvesters to become gummed up from the foam wetting the plants, causing them to tangle in the machine. Generally, they don’t cause serious damage, and the easiest way to control them in the home garden is to wash them off the plant with a hose. On the ground, they are easy prey, and birds especially look upon them as gourmet fare. Sevin, Diazinon, and Malathion can also be used if chemical control is desired.

These insects and their so-called spittle are harmless to you, so if you are experimentally minded, curious, or just attracted to strange and slightly weird things in nature, gently reach into some of the foam and extract its somewhat bug-eyed owner. You will have added a little more to your knowledge of the wide variety of wild creatures that inhabit East Texas fields and forests, and perhaps have a little fun, too.