For as long as mankind has observed the environment – and that’s thousands of years – it has been noted that winter was a time of short days and long, dark nights. Depression often clouded human attitudes, a condition we now call Seasonal Affective Disorder, or SAD, triggered by the absence of sufficient day length. Some people nowadays use special electric lights to artificially lengthen their days, offsetting the discouraging effects of winter doldrums. The farther toward the poles one lives, the longer the nights of winter. In the far arctic and antarctic regions there is a period during which the sun never rises above the horizon. In our northern states and Canadian provinces, “cabin fever” creates severe emotional stress for some people. Cooped up indoors for long periods and seldom seeing the sun, people go bonkers. So, it’s no wonder that celebrations developed, some with religious overtones, as winter blackness began to abate and the sun enlightened days and lives longer each day. 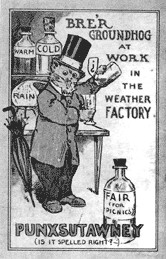 Two days ago, Groundhog Day was observed, as Punxsatawney Phil, the four-legged, furry weather prognosticator of Gobblers Knob, Pennsylvania, emerged to determine the remaining duration of winter. His prediction is based simply on whether or not he sees his shadow. According to tradition, to do so means six more weeks of winter. He did. So be it. Or not.

Watching groundhogs for weather prediction has roots dating back at least to the time Roman legions conquered the Teutons, now known as Germans. However, their animal of choice was the European hedgehog and it was believed that if the sun was out on Candlemas Day, hedgehogs would cast a shadow signifying more winter weather. Pennsylvania’s earliest settlers were German. Although they found no hedgehogs there, groundhogs abounded and February 2nd became the official day to observe this rotund animal’s behavior. Considered wise but jumpy, an emerging groundhog, seeing his shadow on February 2nd, supposedly would scare himself so badly that his only hope was to retreat into his burrow to slumber in warm comfort another six weeks while winter raged above.

For as the sun shines on Candlemas Day,
So far will the snow swirl until the May.

This Pennsylvania holiday dates back at least to 1886 when the Punxsatawney Spirit newspaper publicly declared that “Today is groundhog day, and up to the time of going to press the beast has not seen his shadow.”

And an English song’s lyrics warned:

If Candlemas be fair and bright
Come, Winter, have another fight;
If Candlemas brings clouds and rain,
Go Winter, and come not again.

Candlemas, also knows as the Festival of Lights, has been celebrated on February 2nd for hundreds of years. White candles, often blessed by clergy, were lit to attempt to illuminate homes and drive away all vestiges of shadow and darkness. An ancient Gaelic holiday, known as the feast of Bridget of the candles, was also celebrated at this time. Known as Bridget of Kildare, she was the Celtic goddess of fire, the hearth, fields, poetry, and childbirth.

Phil, the somewhat lumpish resident of Gobbler’s Knob, now receives annual national attention, as television, radio, and print media flock to his Pennsylvania home when a tophatted official brings him out to meet his fans and issue the official proclamation.

But, that’s Pennsylvanian, and in East Texas, winter’s bite is usually toothless. Although we may get gummed a bit, seldom does winter’s attack break the skin. Nevertheless, we still complain and shiver when the temperature dips below 50 degrees and wish for summer’s quick return so we can complain again about how hot and humid it is.

Well, wish on. I can assure you that spring is on its way, in spite of what Phil says. I mean, can you really trust a flat-faced, ground-dwelling, fur-covered mammal to give the straight scoop? I don’t think so. The signs of spring are already all around us. Spring peepers, those tiny half-inch long frogs with the piercing peep – peep – peep! are already tentatively filling warm evenings with their calls. Chorus frogs, larger amphibian relatives, with a call like running your fingers along the teeth of a comb, are also joining in the songfest. Particularly noticeable are the goldfinches. Drab all winter, they are beginning to sport their bright yellow spring plumage as they swarm around backyard feeders.

Most obvious to me is that the days are growing longer. A month ago, the day length was only about 10 hours and it’s now nearly 11. Responding to the sun’s prompting, flowering quince is blooming, while jonquils and Camellias grace our gardens.

So Phil, sleep all you want. Even though spring won’t officially be launched until March 20th, here in the fields and forests of East Texas, it’s “fixin’ to git underway.”