Battling for Territory in Spring 2 Mar 2016

Birds are singing their hearts out at dawn and the evenings are filled with the trilling of tiny frogs called Spring Peepers. Winter constellations are slipping down the western sky earlier in the evening while tulip magnolias, wild plums, redbuds, flowering quince, and even daffodils are beginning to bloom. 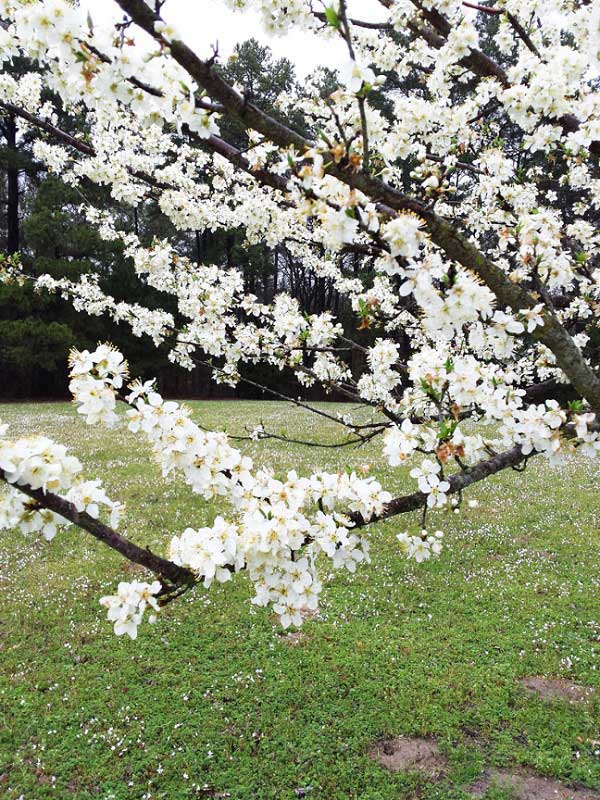 Photo by Paul H. Risk
For some reason, our plum tree always seems to ignore its biological clock and bloom just early enough each year for a late frost to destroy its flowers and wreck our crop.

Although it’s getting warmer, the trigger for the singing, budding, and flowering is the increasing day length, not the temperature. Internal biological “clocks” in plants and animals are one of nature’s safeguards. If only a few warm days could trigger the entire natural world to go into full-blown spring mode, the next cold snap could spell disaster for plants and animals. However, I think one of our plum trees needs to go back to have its clock adjusted. It seems always to flower just in time for a late frost to zap it.

Do birds sing because they can’t dance? Nope. A lot of them can dance just fine. They sing to announce their availability as mates, and to establish the boundaries of their territory. Animals establish territory to help assure sufficient shelter, food, and water, by preventing overpopulation that could exceed the carrying capacity of the environment and result in starvation and death.

The concept of territoriality is a complicated process, involving both subtle and direct interactions that affect people too. Psychological stresses and desires enter strongly into territorial needs or preferences. Studies show that crime, disease, and psychological abnormalities increase when people are crowded too closely together.

Toward the end of the 19th century, Friedrich Ratzel, a German geographer, promoted a theory that all animals, including humans, required certain amounts of living space in order to prosper, or even survive. Adolph Hitler abused that theory as an excuse for world-shaking barbarism. Ignoring the fact that Ratzel said territorial expansion was a natural and peaceful process, Hitler launched his conquest-oriented Lebensraum (“living space”) campaign February 3, 1933, to expand “Greater German” borders. The plan involved the invasion of many European countries, a scheme that ultimately spelled his undoing, and caused death and years of suffering for untold millions of innocent people during World War II.

In the bird world, singing, posturing, flying, and mock or real combat, establish nesting sites as well as territory. Their battles are usually largely bluff, but feathers often are ruffled or lost, and an occasional injury or death occurs.

Some birds become really pushy during their spring real estate search. Chickadees have a particularly demanding attitude, often competing with bluebirds for nest sites. Last year we evicted a chickadee from one of our bluebird nesting boxes (I know, I know, that’s mean) and he spent several hours in a nearby tree yelling threats that I firmly believe were laced with avian profanity.

Besides behavioral changes, the coloration of bird feathers intensifies in spring. Over the past several weeks, male goldfinches have begun to alter their chemistry to change feather color from drab winter colors to brighter yellow. Although many animals don’t see color, birds have an exceptional ability to do so. Their color vision is much better than ours.

Coloration in birds can be both a curse and a blessing. Male brilliance identifies suitors and increases their appeal to females, but also makes them a target for predators. To reduce this danger, females typically wear subdued colors as camouflage, a particular advantage during long periods sitting immovably on a nest. Humans reverse this entirely. Spring finds our females clothed in increasingly vivid colors &8211; for some of the same reasons.

Things change rapidly during the spring. A great family project is to keep a date chart or list of seasonal developments. Which birds are leaving? What new ones are arriving or building nests? What flowers are coming into bloom? How many pounds of shed cat or dog hair have you vacuumed off the couch or carpet? Cats and dogs also have “clocks” that cause them to shed in the spring. Keep your eyes open. The more you observe, the more you’ll enjoy this vital and rapidly changing season all around you, not just in the fields and forests.