Spring is moving northward as the earth moves in its orbit allowing the sun to strike the land surface more directly. Days are growing progressively longer and next weekend we’ll shift into Daylight Savings Time, sacrificing an hour of sleep. We humans, bound as we are to clocks, calendars and schedules and locked up in our little roofed environmental chambers called houses and apartments, seldom think much about seasonal changes. Even when we venture outdoors it is usually only in a controlled environment on wheels – the family security blanket - our car. Plants and animals, on the other hand, are subject to a wide variety of environmental conditions. Wind, rain, snow, ice, heat, cold and humidity all affect them, unbuffered by drywall, synthetic insulation, and mechanical heat pumps.

This past week my wife and I have had the opportunity to travel and observe the subtle and sometimes amazing changes that the onset of spring is bringing from East Texas to Southern Nevada. Yes, we’ve been traveling in a temperature and humidity-controlled automobile, but stops have been frequent and often associated with walks along byways and trails in New Mexico, Arizona, Utah, and Nevada. We’ve passed from East Texas pine forests to the oaks of central Texas and on to mesquite thickets farther west. Sagebrush and creosote bush prairie stretch for miles as trees became scarcer and finally disappear. Great mountains tower on our horizons, often snow-capped, soaring majestically against startling, crystal clear blue skies. In Petrified Forest National Park, the massive trunks of ancient pine-like trees, stone remnants of a once thick forest, lie in mute testimony of the giant ferns, cycads and other vegetation that covered the area more than 225 million years ago. Their wood long ago replaced by quartz, jasper and agate; they provide colorful evidence that eons ago this high desert was tropical. 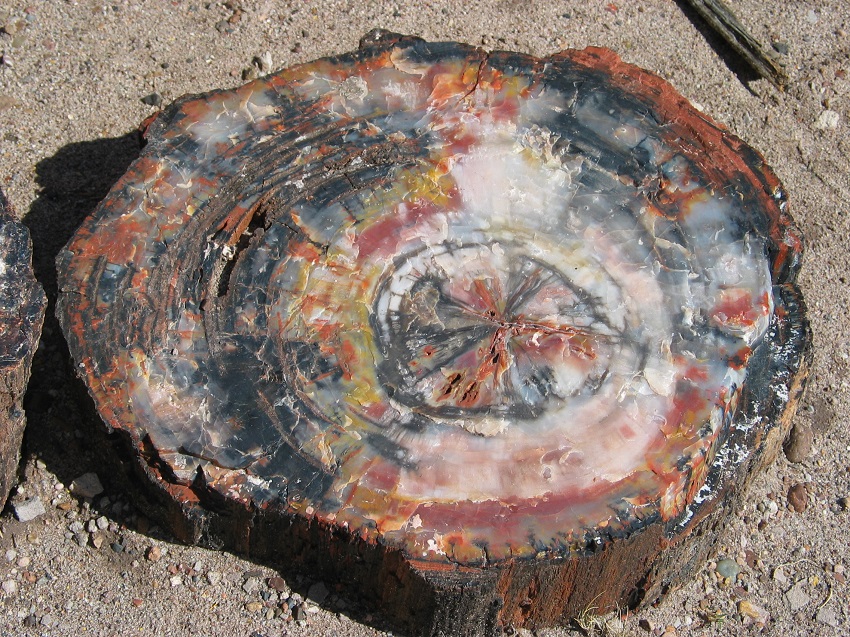 The southern reaches of Utah and Nevada vary from expanses of rolling desert to buttes, mesas and plateaus with craggy mountains, stark, sheer, red rock cliffs and deep canyons. As I write this we are near Veyo, Utah where a tiny café perched under a huge extinct volcanic cinder cone serves excellent home cooking and what have been reported to be the finest pies in the United States – at least a dozen different varieties. If you’re ever in the area, try their mouth-watering mountain berry pie containing blueberries, blackberries and boysenberries.

On the front porch of our cozy mountain cabin near Pine Valley, Utah, the breezes are still brisk with retreating winter. Fifteen-foot-tall pinyon pine and juniper (the latter called cedar by the locals) are the dominant trees. The night skies are pitch black and diamond-like stars can be seen in all directions right down to the horizon. They look so near it seems you could touch them. Outdoor dawn to dusk lighting is prohibited here so the nights seem friendlier - more intimate.

The constellations also proclaim the changing seasons. By 9:30 in the evening all along our travel route, Orion is descending the western sky, no longer dominating us from directly overhead. The Big Dipper in Ursa Major – the Big Bear, is now high in the sky, no longer hiding below the trees in the north, while Leo The Lion has risen from his winter den and rides high in the eastern sky.

As we’ve traveled, spring has come, gone, and returned again because the road elevations have varied from a mere 200 feet in Nacogdoches, Texas to about 7600 feet above sea level at the continental divide. Following spring could only be continuous if it were possible to remain at the same altitude. For every 1000 feet of elevation gained, temperatures typically drop an average of 3-5 degrees. So, warm desert valleys with temperatures near 80 degrees have contrasted sharply with the Pine Valley Reservoir in Utah at 6,200 feet in broken sun, gusty wind, snow flurries, and a temperature of 37 degrees. 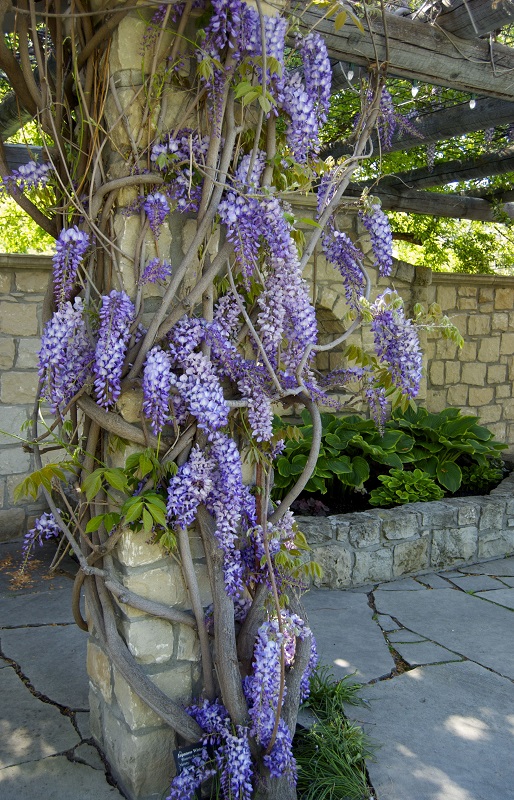 Photo from igardendaily.com
A “Texas Purple” wisteria twines its way up this post in Texas.

We all know that it’s warmer “down south” than “up north.” For example, Mexico is always toastier than Canada. Spring, therefore, seems to originate in the south and move gradually northward. Actually, it is moving not only northward but also rising vertically up the hills and mountains. Interrupted only by brief intrusions of blustery cold fronts unsuccessfully trying to maintain winter’s grip, spring glides gradually but unceasingly up from the valleys, across the plains and into the mountains. Some of the higher mountain meadows – those from 7,000 feet to timberline – will not see spring until mid-July. For them a brief but frantic burst of wildflower color will occur and during their very abbreviated summer they will race to flower and fruit before killing frosts arrive in late August. Above them, in the sharp clear air above timberline, in areas of barren rock and eternal snows, spring seems never to come. Cold, punctuated only for a few brief hours on a few short days will retain an almost unbroken hold on those desolate regions year-round.

The evidences of spring are very pronounced in East Texas where most trees are almost half leafed out. Redbud is everywhere, and pale lavender spring beauties blanket grassy areas. Wisteria, covered with grape-like clusters of purple flowers in full bloom, twines its way up some of the tallest trees. Tulip magnolias are everywhere and are covered with huge pink blossoms.

Here in the west the banks of many streams sport flowering tamarisk trees like pink clouds against the hard rock of canyon walls. Clumps of orange mallow bloom along sandy roadsides and willow trees have regained their flexibility, swaying gracefully as their leaf buds burst into a green mist. In the Moapa Valley of southern Nevada, cottonwood trees are pale green and their down is already drifting in the breeze. Orchards grow more colorful each day.

Unfortunately, the rebirth we call spring will all too soon be gone. Summer will wax and then wane, ushering in fall and then before we know it, winter will once again descend from the north and come down from the heights as we hurry on in our ceaseless travel through space. Nature will have completed another annual cycle – one that nevertheless is somewhat reassuring in times of marked uncertainty in human history. Take time to go outside in the fields, forests, plains, deserts and mountains. Forget your schedule and let spring warm not just the land but the cockles of your heart as well.