Squirrels jump, leap, run and some even fly - sort of. They are buck-toothed bird feeder burglars that climb head up and descend head down. They chitter and twitch their tails in anger or frustration and scurry around burying and digging up nuts. East Texas has three kinds. Fox squirrels are the largest, with bodies 22 inches long (including their tail), grey squirrels, often called cat squirrels, with bodies about 15 inches long, and flying squirrels, which at about 9 inches long are our smallest, most unusual arboreal or tree dwelling rodent. Yep, they’re all rodents. Rats? Close, but not really. But still rodents. 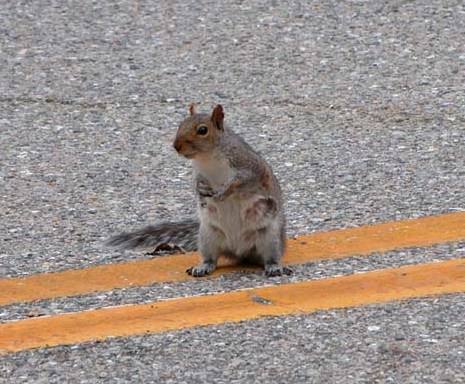 Photo by Calvin J. Hamilton, The Suicide Squirrel, daejasview.com
Indecision is visibly oozing from this squirrel.

The scientific name for fox and grey squirrels is Sciurus. Dating back to early Greece, Aristotle used the word “skiouros” to describe them. Since “skia” means shade and “oura” means tail, they are animals that sit in the shade of their tail. Later, the French gave them the name “esquirel.” These furry-tailed characters are the source of such disparaging comments as, “nutty as a squirrel” or “squirrely” as well as one honoring their practice of preparing for hard times by “squirreling away” food supplies.

Squirrels live a rather frantic life and in the field they seldom survive longer than 5 or 6 years, usually succumbing to starvation or attacks from predators. In cities, many don’t live to see their first birthday, mostly due to losing right-of-way disputes with motor vehicles.

Female fox squirrels bear a litter of 2-4 young towards the end of February or sometimes near the end of June and occasionally in the latter part of August or early September. Grey squirrels have a litter of 2-3 young in the spring and another in late summer. Both fox and grey newborns are hairless, an inch long and weigh about an ounce. Flying squirrels have only one litter a year of 2-6 young and are even smaller at birth than their climbing cousins.

Homes for fox and grey squirrels are old woodpecker nests and other hollows in trees as well as nests of leaves called dreys - big waterproof masses of twigs 14-20 inches in diameter, softly lined with moss, bark, leaves. fur, feathers and lichens. In the summer their leaf nests may be little more than an open leafy platform high in a tree. 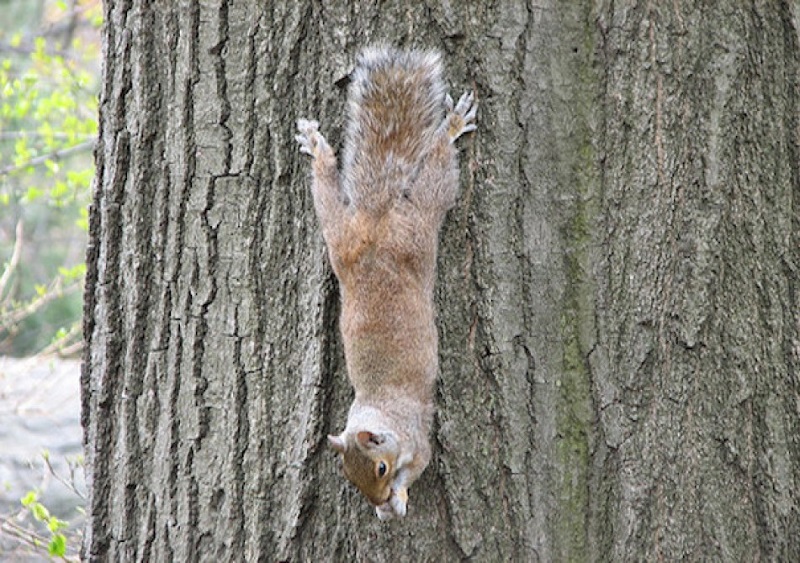 Photo CC BY NC ND
Squirrels can hang by their back claws while moving down tree trunks.

Fox and grey squirrels feed most actively two or three hours after sunrise and two hours before sunset, eating, in the fall, about 32% more than they need to maintain life to build fat reserves for winter. They don’t hibernate, but if weather conditions become severe, they may forage only in the morning and stay home in bed the rest of the time. When the weather is warm it’s not uncommon to see fox and grey squirrels draped over a branch snoozing in the sun.

Before they bury nuts they lick and mouth them, chemically marking them so they can smell their food stashes even under a foot of snow. Fox and gray squirrels eat a very wide variety of foods including the buds, flowers and seeds of maples, mulberry, hackberry, elms, wild cherries, dogwoods, hazelnuts and an occasional frog, bird nestling or other small vertebrate. Most startling is the fact that they also eat poisonous mushrooms and are not harmed by them. So, don’t believe the myth that observing what wild animals eat will provide you with safe survival food! In addition, squirrels eat pine pollen cones and the seeds from female pinecones, carefully peeling each cone scale to get them, and littering the ground under their feeding areas with piles of cone fragments. Flying squirrels are strictly nocturnal, active and feeding only after dark and dining on nuts, acorns, berries, seeds and insects.

Squirrels bodies are well designed for their life style. Their incisors - front teeth - grow continuously, like beaver teeth, to compensate for the wear and tear they receive from gnawing on nutshells and tree bark. To climb down trees, their hind feet turn backwards to allow them to grip as they descend head down. They can leap long distances from branch to branch and tree to tree, balancing with their swirling tail. They have sweat glands on the bottoms of their feet and between their toes that may help them mark their territory. When they are hot or excited they leave damp footprints on slick surfaces. 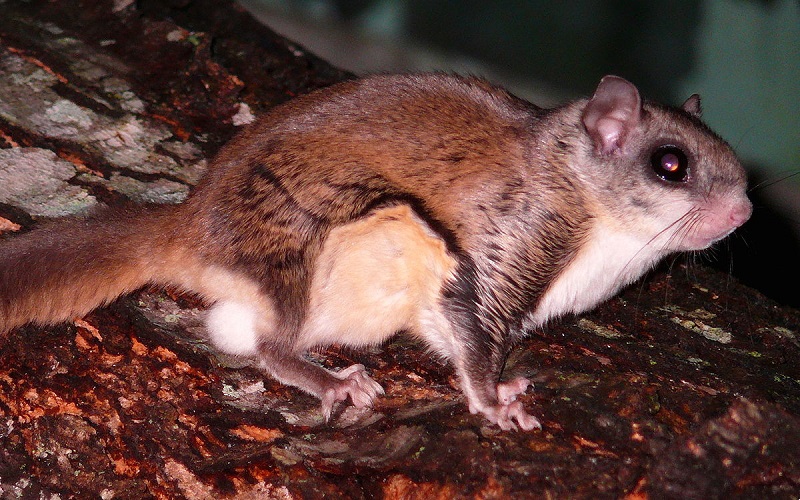 Texas’ most unusual tree-dwelling rodent is the flying squirrel. They don’t really go flapping through the forest canopy, but a skin membrane along their sides connecting their front and back legs can be spread like a sail or airfoil that allows them to glide 80 or more yards.

Squirrels look fun and friendly and they are accomplished panhandlers, but, a word of caution, don’t hand feed them. They get a little excited and clumsy when they munch goodies from your hand and they may accidentally include the tip of your finger in their snack. That can be a big problem, because you don’t see many squirrels wearing collars with rabies inoculation tags. Yes, they can carry rabies! Even a minor bite requires you to seek medical help which may likely mean taking rabies shots, not something you really want to do. Besides, they can also carry bubonic plague, transmitted by a bite from their fleas. (They don’t wear flea collars either.) In short, if you want to feed squirrels, set up a feeder, but keep your hands off them. Just enjoy their antics from a distance as another interesting part of East Texas fields and forests.