If you get a chance, before the city and your neighbors completely blot out the night with glaring, outdoor lighting in a frenetic fear of the dark-side demons and the worship of glittery garish advertising signs, take time this week to go outside and look at the stars. 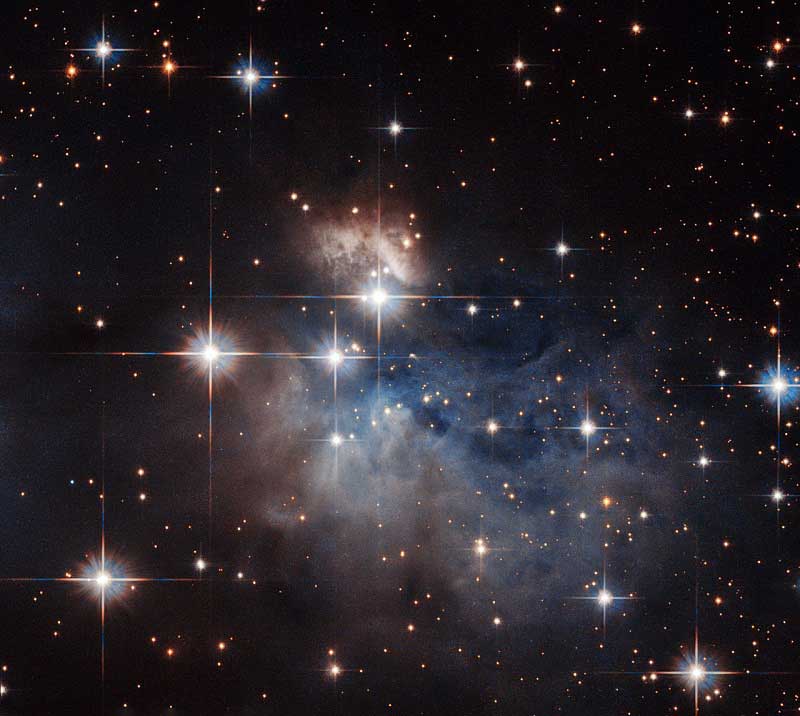 Hubble Space Telescope, courtesy of NASA
The awesome universe that spreads over our heads nightly is something too few of us see.

The skies and the limitless space that surround our planet are filled with stars, along with a relatively few wanderers called planets. Billions, trillions, and more of them sparkle in the darkness overhead. Yet light pollution dictates that only about 20% of the people in the U.S. can still see the amazing Milky Way.

Some American Indians thought stars were the flickering campfires of dead, departed spirits. Other ancient peoples believed the night sky was a black dome with pinholes letting in light. So preoccupied were the Greeks and Romans with the night sky that they conjured up imaginary patterns – constellations – in the stars, assigning them names and incorporating them into their religions. These are the same constellations recognized by us today.

What are stars really? Quite simply, they are suns, differing only in minor degree from Old Sol that illuminates our days and warms us with its rays. All of those stars, or suns, are the focal-point of solar systems around which, almost daily, astronomers are finding new planets, some astonishingly like those in our own system. At last count about 236 so-called exoplanets have been discovered. Think about it. Millions and billions of suns, each with the potential of harboring earth-like planets. I wonder how many other people there are out there, looking back toward our little bluish planet Earth, wondering about us.

To me it is the height of egotism to think that an all-powerful “God of the universe” only found it worthwhile to populate a single planet with intelligent life among the numberless “worlds without end” which He is said to have created. Someday I think we’ll know, but in the meantime, I see no harm in speculating.

So here we are, on a rather small planet called Earth, floating around in space, orbiting one of those pinprick suns in the blackness of the void, and deriving from it virtually everything we have. Our only source of energy, it was responsible for photosynthesis in ancient forests, swamps, and bogs that became coal and oil fueling our power plants. It is in the gasoline of our cars, the food in our markets, and the meat on our plates.

Tilted on our axis by about 23 degrees, our orbital travel around the sun causes seasonal day-length changes, with longer days in summer, and shorter in winter. Although few of us think much about such things, those shifts are powerful, controlling the flowering of plants, influencing cats, dogs, and other animals to grow winter coats and shed them in the spring, triggering the appearance of color in fall leaves, as well as the mating cycles in insects and many other animals.

Positioned as it is, 93 million miles away, our sun warms but doesn’t cook us, only because we just happen to rotate at exactly the right speed on the rotisserie of our axis. A very little change in that velocity and we’d either fry or freeze. During the night the day’s heat radiates into the emptiness of space at a truly frightening rate, dropping our air temperature an average of 30 degrees. What if the earth got stuck and we had a night that ran for 24 or 48 hours? By the long-awaited morning, we could be experiencing night-time temperatures 120 degrees lower than normal – about 50 degrees below zero.

The complexities of our existence in the cosmos never cease to awe and inspire me. It seems that most of my life has been spent learning more and more about life on this little orb, and yet as advancing age dogs my footsteps, the realization comes that my understanding is still extremely limited, even about the things I think I know.

So, let me challenge you. Don’t just wander aimlessly through life with your eyes on the ground. Look up, see the stars, and strive to grasp their deeper meaning as they pass across the darkened fields and forests of Texas, and all the world.