There are at least six kinds of stinging caterpillars in East Texas, but the most dangerous one is commonly called an “asp.” The larva of a velvet moth, more properly called a puss caterpillar, is about an inch to an inch and a half long, very fuzzy, whitish, cream, gray or buff-colored, and often has a white or yellowish line down the back. Its hair is very long and looks like combed-back fur, tapering toward their narrow rear end. Their soft appearance is deceptive, since the “fur” conceals stinging hairs called setae that release venom when their tips break off after penetrating the skin.

Stinging caterpillars don’t aggressively and intentionally sting like wasps, bees, or scorpions. They have to be touched, and even a gentle brush against them causes their stinging hairs to penetrate the skin and release venom. Their stings are intended to discourage birds and other predators from eating them. 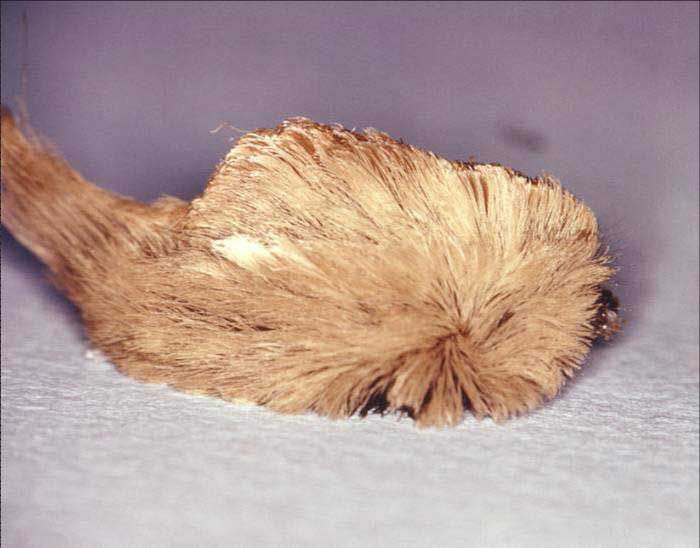 A reddish, inflamed area or whitish, blanched swelling often develops at the site of the sting, and the victim may also have a headache, nausea, vomiting, painfully swollen lymph nodes, and in rare cases, shock and respiratory difficulties. Symptoms usually begin to disappear on their own in 2-4 hours, but some people experience pain for as long as 12 hours and the discoloration of the skin may remain for two weeks.

Arriving from “up north” as an 8-year-old kid, I’d had no experience with these varmints. So when a friend and I were climbing a tree and I noticed a cold feeling on my wrist, followed by a mild stinging sensation, I wasn’t worried. But when I showed my buddy the fuzzy little critter on my arm, his not very helpful reaction was to scream “you done been bit by a Ay-asp!” as he dropped out of the tree like a rock and streaked for home.

My mom only knew about ancient Cleopatra’s asp bite so she was a bit agitated when I said I’d been “bitten” by an asp. Cleo’s bite, however, was from a deadly neurotoxic viper she pressed to her breast to commit suicide, not stings from a fuzzy caterpillar.

The pain produced by an encounter with asps is supposed to be the most painful of all the Texas stinging caterpillars, and speaking from experience, I can tell you the experience is terrible.

Excruciating pain began to spread up my arm and the lymph nodes under my armpit swelled and throbbed. Our doctor and a rather unexcited pharmacist agreed that I’d probably survive, but that I’d likely want to die before it was all over.

Although cold packs had been recommended, I couldn’t stand their pressure. For the next five hours, I sat in agony on the couch, my arm cradled gently on a pillow while Mom spooned baking soda paste over the sting site, the only remedy anyone seemed to know about back in the 1950s. Never have I been in such exquisite pain from an insect encounter. Wasp and bee stings are, to me, a distinct pleasure by comparison. I didn’t die.

Velvet moth eggs are generally laid in late spring or early summer on oaks, pecans, elms, hackberry and other trees where they hatch and begin to consume leaves. Asps are generally more in evidence during the late summer and fall but they can also be found during the summer.

If you have an encounter with any of the stinging caterpillars, apply duct tape, Scotch tape, or adhesive tape to the sting site and then strip it off. Repeat with fresh pieces of tape. The spines and hairs will stick to the tape and be pulled off.

Creams containing hydrocortisone or diphenhydramine (Benadryl©) applied to the skin will reduce the itching and pain. Oral Benadryl© (25-75 mg) may also help limit symptoms. Aspirin, Tylenol©, or Advil© may ease pain, but they don’t help very much. A physician may prescribe hydrocodone, oxycodone, or in severe cases, morphine, to control extreme pain.

If extreme symptoms of nausea, vomiting, shock, or breathing difficulties develop go to an emergency room.

Most caterpillars are harmless, but avoid those that are very fuzzy, furry, spiny, or brightly colored. To be on the safe side, look but don’t touch.