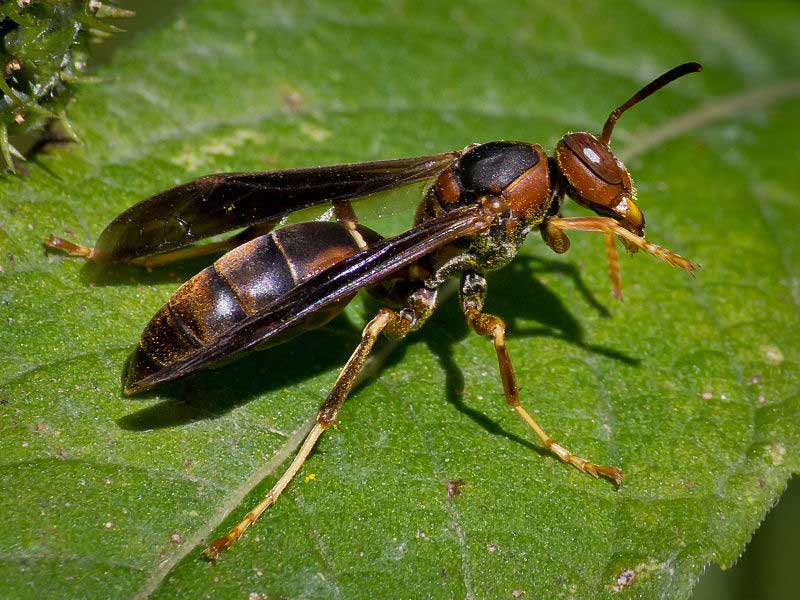 Perhaps the first question is why do wasps have stingers and venom at all? Or, as my attorney Alfred Weatherly’s wife recently asked, what good are wasps?

The simplest answer to her question is that wasps (not honey bees, which feed their young pollen) kill and eat the larvae of various insects that might otherwise be munching on your flowers and vegetables. The adult wasps kill the prey larvae with their sting and then take the “fresh meat” back to the nest to feed their young-un’s.

Stings also serve as a defensive weapon for their owners. If swarming, buzzing, and diving at an animal doesn’t discourage an intruder, the sting comes into play. Wasps have a permanently-mounted sting in their tail. When a wasp stings it stabs the needle-sharp stinger in and injects venom from a muscular storage sac in their abdomen. Wasps, unlike honey bees, can sting more than once.

Some people describe the sensation of a wasp sting as stabbing, fiery, burning, aching, excruciating, or all of the above. How much it hurts is an individual thing. The wasp venom, depending on the species, can contain as many as 13 active chemicals designed to cause pain and swelling.

Justin Schmidt and colleagues have developed a sting pain index by allowing themselves to be stung by 78 different critters. The scale runs from 0 to 4. Zero is no pain and 4 is maximum. They rated fire ants at 1.2, yellowjackets and honey bees at 2.0, and “red wasps” (paper wasps) at 3.0. Want to volunteer? I didn’t think so.

Some of the chemicals in the venom slow blood circulation causing the stinging chemicals to remain in place for an extended time rather than being diluted and carried away more quickly. That’s why stings often hurt for a long time.

The body’s cells also produce histamines and related substances from the venom that result in tissue swelling. One poor victim I know was stung in the middle of his forehead by a “red wasp” and his entire face swelled up like a balloon.

Sometimes a very dangerous systemic allergic reaction called anaphylaxis occurs in sensitive people. Anaphylaxis can kill in less than 30 minutes. Each year in the United States about 100 people die from stings due to this reaction.

A victim going into anaphylaxis may feel light-headed, anxious, nauseated, or have an irregular or very rapid heartbeat and difficulty breathing. Loss of consciousness may quickly follow. Swelling of the larynx and throat can develop rapidly, and death often occurs due to airway blockage. Children and elderly people are at greater risk. (I’m not sure what “elderly” means any more.) People who have had a previous allergic reaction from stings are, of course, likely to have more serious problems.

Applying an antihistamine such as Benadryl™ or hydrocortisone cream and/or taking Benadryl™ in capsule form will often alleviate symptoms.

Sawyer manufactures a plastic Extractor™ that can be used to suck out wasp venom. My experience has shown it to be very effective. Extractors are available at outdoor outfitters.

For most people wasp stings are painful but not life-threatening. But remember, if a sting causes extreme swelling, wheezing or difficulty breathing, blurred vision, dizziness, heart palpitations, or tingling of nose and lips, seek medical attention immediately. People with known extreme sting sensitivity should see their physician about carrying a prescription Epipen™ that can automatically inject a life-saving dose of epinephrine right through clothing.

To reduce your attraction to stinging insects, use repellent containing DEET, and don’t panic and wave your arms when approached by flying critters. Incidentally, perfume and aftershave make you more attractive to bees and wasps, so unless you crave a close encounter of the worst kind, don’t wear fragrances when you go outdoors.

Here’s wishing you a pleasant and stingless summer. Keep a sharp watch and listen for that tell-tale buzzing of an irritated wasp.