It’s definitely spring and both flowers and flying critters are everywhere including those with stingers.

Both ordinary honeybees and killer bees – a dangerous Africanized variety of the common Italian honeybee – live in most of Texas. They both carry a single-use, barbed stinger in their tail that is left behind as they fly off after an attack, tearing out parts of their own abdomen causing themselves fatal injury.

Although honey and killer bees have about the same toxicity, the latter have very short fuses and an extremely low tolerance to intruders, often mounting mass attacks up to150 yards from their nest; about three times the distance that honeybees attack. Killer bee victims are often stung hundreds of times during an assault and some have died.

Wasps come in a huge variety and their stingers are slick, non-barbed stilettos that are firmly attached to their owners. Their attack is not a single-shot suicide attack. Each one can and often does, sting numerous times and live to fight again.

The most common wasps in much of the United States are paper wasps. Their open-faced nests are often located under the eaves of buildings. Commonly, the ones we see in East Texas are reddish, orange, rusty or black. Their nests are often as large as a man’s hand and may have 20-30 inch-long adults defending it. They are not particularly hot tempered, but some people seem to bring out the worst in them.

Yellow and black striped, they are about three quarters of an inch long and live in underground nests housing several hundred to a few thousand adults. Often very aggressive, their attacks frequently focus on the victim’s head and face. 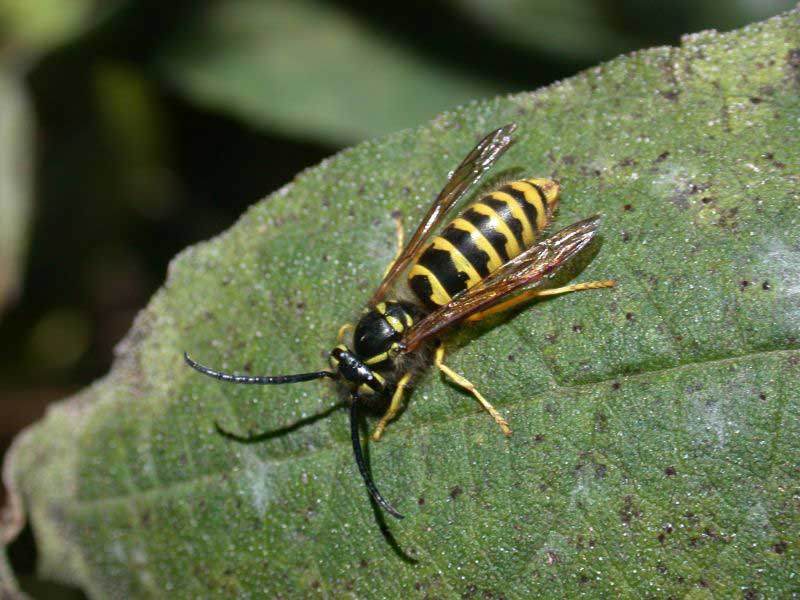 Photo from larvalbug.com
A yellowjacket.

Most of the season, yellowjackets eat meat and may visit your barbeque, cutting out little pieces of raw hamburger or steak to take home – even if you don’t provide take-out boxes. Toward the end of summer, as their civilization starts falling apart, they crave fruit, soft drinks, beer and other sugary food. Yeeee-haaaa! Eat, drink and be merry, for tomorrow we die! Yellowjackets have occasionally been swallowed when they crawled into a beverage can. That little indiscretion kills the yellowjacket when it hits your digestive juices, but the little varmint can sting all the way down, swelling your throat closed and producing a major medical emergency.

If a bee was your assailant, you’ll likely see the end of the embedded stinger sticking out of your skin, often with tiny muscles and a small attached venom sac still pulsing. Lightly scrape a pocketknife blade along the skin with a shaving motion and when you hit the stinger, flick it out. Or, just grasp it with your fingers and pluck it out.

Bee and wasp venom is a mixture of at least six different chemicals causing pain and swelling, among which are histamines. So, applying an antihistamine such as Benadryl™ or hydrocortisone cream and/or taking Benadryl™ in capsule form will usually alleviate symptoms. Cool, moist cloths, an ice pack or a baking soda paste may also help relieve discomfort.

Sawyer manufactures a syringe-like plastic Extractor™ that can be used to suck out bee, wasp and even snake venom. No cutting required – or permitted! They are available at camping outfitters and stores such as Wal-Mart for about twelve dollars. Apply the Extractor™ immediately after you are stung. My experience has shown it to be very effective. Remove a bee’s stinger first and then use the Extractor™.

For most people, bee and wasp stings are painful but not life threatening. But, if a sting causes extreme swelling, wheezing or difficulty breathing, blurred vision, dizziness or tingling of nose and lips, seek medical attention immediately. You may be suffering from a life threatening reaction called anaphylactic shock that can kill in minutes. People with known extreme sting sensitivity should see their physician about carrying a prescription Epipen™ that can automatically inject a life-saving dose of epinephrine right through clothing. Approximately 120 people die from stings each year in the United States.

To reduce your attraction to stinging insects, use repellent containing DEET and don’t panic and wave your arms when approached by flying critters. Just move away, at light-speed if they decide to get serious. Incidentally, perfume and aftershave make you more attractive to bees and wasps, so unless you crave a close encounter with them, don’t wear fragrances when you go outdoors.