Lightning is one of the most potent and fearsome forces on earth. It has inspired fear, and rightfully so, since the dawn of humankind. Vikings attributed it to sparks from Thor’s anvil. The ancient Greeks believed the god Zeus hurled lightning bolts. Although we now have scientific explanations for the origins of lightning, it’s just as dangerous as it was in ancient days.

All thunderstorms produce lightning, gigantic sparks of electrical energy that leap from negatively to positively charged areas. Only about 25% of lightning bolts hit the ground. The other 75% flash within or between clouds.

The bolt’s tremendous surge of electricity blasts through the air at between 60,000 and 90,000 miles per second, instantly heating the air to as much as 50,000 degrees Fahrenheit (three times hotter than the sun’s surface) compressing it into a shock wave that is heard as a crash of thunder. 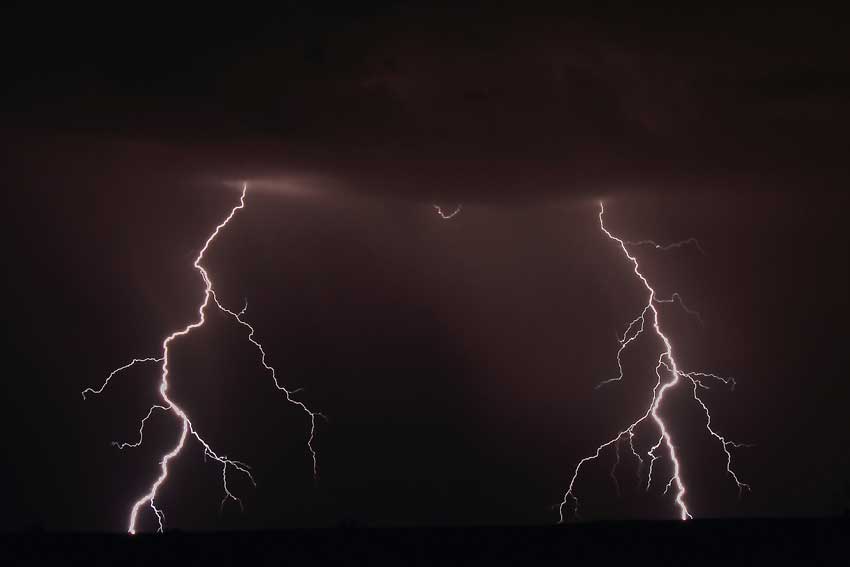 Although the average lightning bolt lasts only 1/10,000 of a second, it packs energy as high as 150 million to 1 billion volts at 10,000 to 200,000 amps. Your home’s whole electrical system is normally rated at only 200 to 400 amps and an arc welder uses 250 to 400 amps to weld steel. Is it any wonder that lightning bolts actually vaporize metal objects and melt sand?

According to the National Weather Service, there are 2000 thunderstorms taking place worldwide at any given moment, for an average of 100 lightning strikes each second. The average number of lightning strikes worldwide per day is a staggering 8.6 million. If its energy could be controlled, the average lightning bolt would illuminate a 100-watt light bulb for 3 months.

Lightning can strike nearly anything, including automobiles and airplanes in flight. Yet, a car is one of the safest places in a thunderstorm. However, its protection is not because of the insulation provided by the rubber tires. When lightning hits a car, the charge flows through the body and frame of the car, around the occupants and arcs to the ground from the metal wheels, often right through the tires. On Interstate 15, north of Las Vegas, Nevada a few years ago, lightning struck a moving car blowing out all four tires and rupturing the driver’s eardrums. Skidding off the road, he sustained only minor injures, none of which were related to electrical shock.

Generally, the highest object in an area is the most likely to be struck. So, standing on a golf course, sitting in a boat on a lake, or standing on a mountain provide great opportunities to test your belief in an afterlife. However, the widespread belief that carrying metal objects during a thunderstorm attracts lightning is not true, unless the metal is taller than you are. Lightning prefers to strike pointed objects such as the tops of trees, flagpoles and antennas.

Lightning often strikes up to five miles away from a thundercloud, so just because the clouds look to be distant, don’t assume you’re safe.

The 30/30 rule states that when the time between the flash and boom is 30 seconds or less, it’s time to take cover and then wait 30 minutes after the passage of a thunderstorm to resume exposed outdoor activity.

Here are ten rules that can save your life when lightning threatens:

Finally, there is no truth to the belief that lightning never strikes twice. It has no hesitation about striking the same place and sometimes ten or twelve separate discharges flicker rapidly along a single path to the same unlucky target.

Thunderstorms can be beautiful and awe-inspiring and I enjoy them. Just be sure to use wisdom and caution as this spring’s new crop of storms rolls through the area.