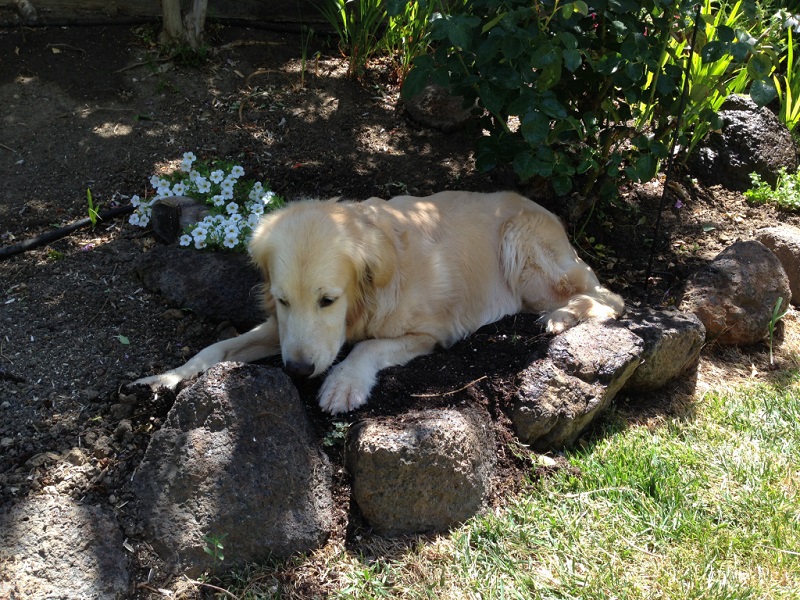 Photo by goldenkali.com
There's just no better place in the summer than a freshly-dug hole in the dirt.

“Lazy as a dog” and “dog tired” describes both my attitude and energy levels about now. It’s hot and headed for hotter. The latter part of this week we’ll see temperatures near 100 degrees with heat indices as high as 125! The outdoor dogs I’ve seen recently, even though temperatures are only in the mid-nineties, have been flaked out in the shade with their tongues lolling out, panting away excess heat by evaporating moisture from their lungs and tongues. Our “canine companion animal” (how politically correct can I get?) digs foxholes or maybe dogholes in the flowerbeds among the azaleas in an attempt to reach cool, moist earth, a project that doesn’t endear her even a little to my female companion person (read spouse.) So, one might guess that the dog days of summer were named from the behavior of their namesake, but that’s just not true. The name originated many, many years ago from people living in the Mediterranean region who were much more observant than I am. They noticed first of all that disease seemed to be more active during this time of the year and apparently began to look for reasons. Those who viewed the night sky had determined that stars cycled through the heavens annually and correctly determined that those visible on winter nights were in the daytime sky during summer. Sirius, the brightest star in our celestial display, hides during summer and is up with the sun. “So,” thought the observers. “Brightest star plus sun equals more heat.” Since Sirius goes by the alias “Dog Star,” and is in the constellation Canis Major, The Big Dog, the period twenty days before and twenty days after the date that the sun and Sirius rise together, received a lot of dogged recognition. Thus, Dog Days gained its label. It is generally considered to be from about July 3 to August 11.

Actually, there are a lot of unpleasant things that happen this time of the year which might make a person, then and now, think that things are rapidly going to the Lower Regions in a hand basket. Steamy days and nights bring out the worst in mosquito numbers and attitude. Those little, buzzing, flying hypodermic syringes can’t handle low humidity. They dehydrate and die. Sticky, hot weather is their favorite, and they carry a number of dangerous diseases including malaria, yellow fever, several kinds of encephalitis and now, West Nile virus. Ticks are also out and about, carrying Rocky Mountain spotted fever, Erlichiosis, typhus, and Lyme disease, not to mention a host of tropical disorders. Meat rots faster in the summer and as a result, more people would have been ill from food poisoning. Flies buzz about, tracking through animal and human waste and other refuse and then land on food. Biting flies add their special brand of havoc to the assault of the biters. Wounds heal more slowly and may fester and become gangrenous. So, there is no wonder that ancients as well as present day people associated this time of the year with unpleasant things. Even rabies seems, at least in folklore, to be more in evidence during Dog Days. In To Kill A Mockingbird, Calpurnia, the Finch’s housekeeper, debates Eula Mae, the telephone operator, over the appearance of a mad dog in February, a time of the year they did not normally associate with rabies. Summer should be the time for rabid dogs, they assumed. Atticus Finch finally shoots the foaming-at-the-mouth, stumbling dog, which actually could have been suffering from something else. But it’s hard to send a fictitious dog head to the lab to find out for sure.

The effect of the hot weather itself can also be a problem for many people. Our bodies lose heat by sweating and the evaporation of that perspiration cools us like the pads in a swamp cooler. When the humidity is high, evaporation slows and our bodies can easily develop a heat load that will trigger heat exhaustion or deadly heat stroke. Our energy levels drop to a low ebb and spring fever becomes the summer doldrums. We, like dogs, would like to just lay around and stay cool, reducing physical activity to the minimum necessary to operate the air conditioner. Unfortunately, many people can’t afford the luxury of indoor cooling devices, and especially in the elderly, heat-related illness often becomes life-threatening. Even for the young, summer temperatures can compromise well-being. Every year, there are deaths during athletic training, due solely to failure to consider the dangers of high temperature and humidity. Be aware of the “feels like” or heat index readings that the weather people release. When they are over 100, serious danger exists. Limit physical activity to the cooler times of the day, drink plenty of water and avoid alcoholic beverages. The latter tend to dehydrate you even more and are not an adequate substitute for cool, clear water.

The bottom line is simple. Be cool man! Lay back and take it easy. Watch the clouds, enjoy the hummingbirds at the feeder. Dig a hole in your azalea bed and share it with your furry friend. Summer can be a dog-gone good time if you use common sense. Otherwise, you may end up dead as a dog. (Or is that dead as a doornail?) Anyway, enjoy summer in the fields and forests. Before you know it we’ll all be complaining that it’s too cold again.