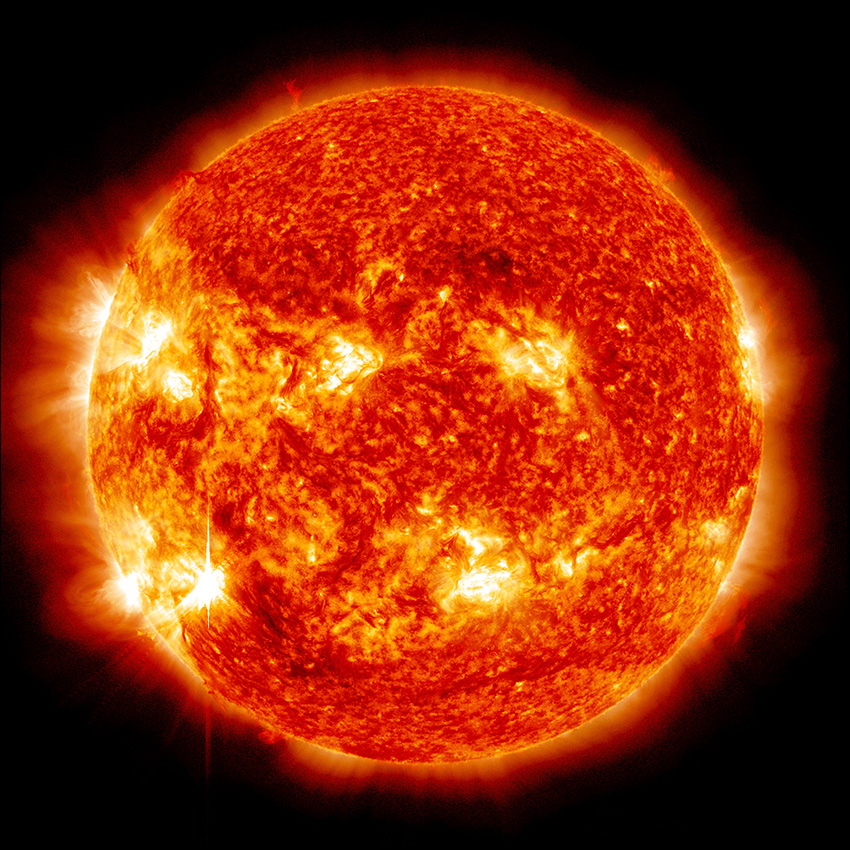 Photo courtesy of NASA.gov
The sun is an awe inspiring blazing giant, the source of all life on Earth and around which our planet rotates.

Ninety million miles away from Earth, a raging ball of nuclear fusion boils, swirls and provides all the energy we use on earth. Its surface seethes at 11,000 degrees Fahrenheit! To say it is gigantic is a stark understatement. The sun’s diameter is 879,000 miles. The earth is a mere drop in bucket with a diameter of only 7925 miles at the equator. A million earths would fit inside the sun!

Impressive? Yes, but our sun is certainly not one of a kind. Indeed there are billions, trillions, quadrillions, just like it spread across the measureless reaches of space. We see them at night only as pinpricks of light spread from horizon to horizon, in every direction. Those distant diamonds in the velvet-black sky we call stars but they are actually suns and many have planets like ours orbiting them.

“Our” sun, rising in the east and setting each evening in the west, influences everything we do. With gratitude we feel its warmth on a cold day, but we’re lucky it isn’t closer, barbecuing rather than comforting us. A bit farther away and winter would be eternal; our earth just a frozen rock, spinning lifelessly through space.

Aztecs, Mayans and ancient Egyptians worshiped the sun as a god. In a sense, many modern people still seem to be sun worshipers. They strive each year for a uniform bronze suntan by cooking themselves in its rays. During winter some people, like warm-blooded biscuits, revert to sliding their paling bodies into specially constructed “ovens” filled with ultraviolet lamps to maintain their perfectly “done” tans.

However, be warned. Both the sun and UV tanning salons rely on the same mechanism. They cause the skin pigment melanin to darken. But sometimes melanin doesn’t just tan. It goes haywire and produces life-threatening cancers - rapidly developing malignant melanomas. Unless caught very early, these deadly growths can kill. Most dermatologists urge extreme caution or complete avoidance of tanning salons. In all cases, those planning exposure to the sun should use sun blocker creams with an SPF of 30 or higher.

The sun produces only a very narrow band of light that we can see, bathing earth with seven colors visible to us – red, orange, yellow, green, blue, indigo and violet - which when blended, appear as white light. Many insects can see well into the ultra-violet spectrum, radiation that’s invisible to us. Some animals see only black, white and shades of gray.

In spring, the sun shines longer and increasing day length triggers the formation and bursting of flower and leaf buds, the wild growth of your lawn and the shedding of insulating undercoat fur on wildlife and pets. The internal “light clocks” of birds lets them know when its time to sing and lay eggs. Chlorophyll, the green coloring in plants, uses sunlight to produce plant nutrients and oxygen.

Our sleep is controlled by light controlled melatonin, assisting us in getting a good night’s rest. Its lack, often caused by something as simple as night lights, can result in insomnia and various illnesses.

In short, Old Sol, blazing in the sky is truly a multifaceted God-send. Treasure it. It won’t always be there. Are you worried? According to astronomers the sun is already about 5 billion years and will only last another 10 billion or so. Oh well. As Scarlett O’Hara said in “Gone With the Wind,” “I can’t think about this right now! If I do I’ll go crazy if I do! I’ll think about it tomorrow.”

Have a happy spring in the fields and forests. Go outside. Don’t hide away from the beauties all around.