Father Time waits patiently ready to chop off with finality the year 2012.

It’s almost 2013 and we now are able to calculate time to the minutest fraction. Time drives us. We worry ourselves sick over appointment times, class times, countdown times, career times and our advancing age.

According to widespread popular belief, intellectual compromise and outright guesses, most people in the Western Hemisphere accept that we are now about a week away from the New Year of 2013. In the Eastern Hemisphere, the Chinese New Year won’t start until February 10 and its arrival will be celebrated for 15 days. According to the Chinese calendar, which is based on solar and lunar events, the coming year will be 4711 and will be called the Year of The Snake.

Time measurement instrumentation has a long history. Water dripping from a container, sand passing through an hourglass, candles with marks on their stems have all been used to approximate intervals of time. But, these methods were all flawed to some degree. Candles, for example, burn at a rate determined by the composition of their wax, diameter, and wick material.

As we became more technologically capable, mechanical clocks began to appear. They usually kept time based on the measured pace of a swinging pendulum through gears and wheels that caused minute, hour and second hands to move around a circular dial. Although some clocks were constructed of wood, most were made of metal and made only by skilled clockmakers. Clocks were expensive and not easily portable. But, timepieces became progressively smaller, until they could fit into a pocket. Early pocket watches were often bulky; almost the size of a hen’s egg. Both clocks and pocket watches often displayed not just the time of day but phases of the moon, name of the month and in some elaborate models, the position of planets.

Pocket watches became even smaller and more accurate. Those carried by conductors on trains often outperformed clocks. It was common for a person to drag out a pocket watch, compare it to their grandfather clock in the hall or a mantle clock, and then reset the clock according to the watch. 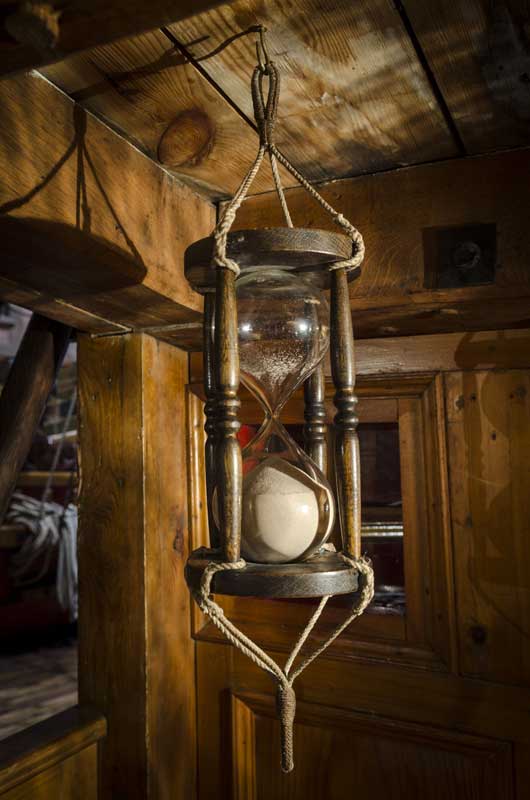 Photo courtesy of manitobamuseum.ca
Hourglasses like this one were commonly used on ships to track time.

Mechanical clocks and watches slowly began to give way to hybrids mixing gearing with electronic methods for determining time. One of the earliest was made by Bulova. Called the Accutron, it employed a tiny tuning fork that vibrated in an electrical field. Then came the quartz movement. A vibrating quartz crystal could divide the passage of time into extremely tiny segments greatly increasing accuracy. In addition, quartz movements were cheap. Rather than repairing the works, the entire movement could be inexpensively replaced.

Still, any mechanical gearing in a timepiece was a source of inaccuracy, and about 30 years ago digital clocks and watches arrived. With no moving parts, phenomenal accuracy was then possible. But digital timepieces pushed the watch and clock maker’s profession close to extinction. Schools teaching their craft began to close their doors and now there are only a few left in this country. The average age of professionally trained clock and watchmakers has increased to more than 70 years and they are rapidly disappearing entirely.

Today the United States Government maintains a time standard based on the decay of radioactive material and broadcasts amazingly accurate time signals over special radio frequencies. Ordinary citizens can now use so-called atomic clocks and watches to keep their lives in tight synchronization with the passage of time.

But, whether in the fields and forests or in our own homes, we and all other organisms reproduce, germinate, flower, grow winter coats, shed fur, hibernate, become seasonally depressed, produce colorful leaves, and a myriad of other things all without a single reference to anything but our internal biological clock, which does its time checking by sensing day length.

The most important events in life don’t require a clock or a watch. With all of our precise time measurements are we any happier this year than when time was measured only by the passage of the sun and stars? I know the time within microseconds per year! So what? Does it make me more content? In terms of things of real significance, probably not. You can’t rush Father Time. Ease up, slow down, and have a Happy New Year.