Southern Prickly Ash Could be a Medicine, or a Weapon 23 Aug 2017 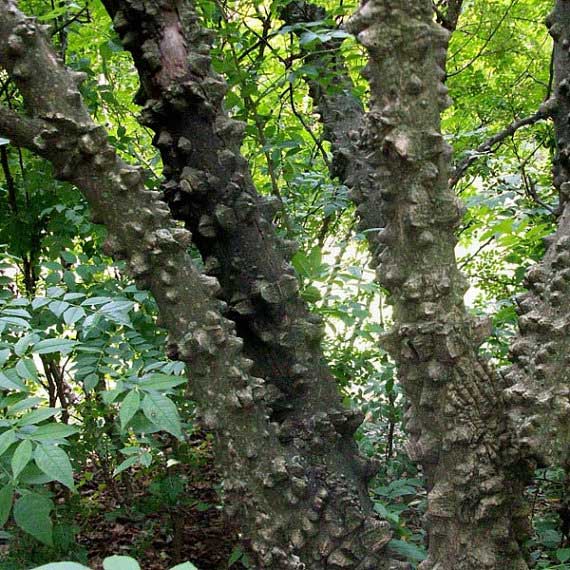 Photo by VincentGardens
Southern prickly ash has been a source of medicine for many years.

Commonly found in East Texas woods, with thorny branches and a trunk covered with big, knobby, cone-shaped projections, it’s no wonder that southern prickly ash is also called Hercules’ Club. With all those big knobs, often with a thorn in the middle of each, I can easily imagine Hercules using it as a bludgeon. But what about as a medicine?

The fields and forests throughout the world have long yielded a bounty of medicinal plants. Some are small, like dandelions; others are tree-sized. Their variety and abundance are amazing. But modern medicines and pharmacies have taken their place for most people. Today, herbal medicines still abound for harvesting or purchase in health food stores.

Other names for prickly ash include toothache tree, or “tingle tongue,” because chewing the leaves, bark, or twigs cause a tingling numbness of the mouth, tongue, teeth, and gums. It was used by both Native Americans and early settlers to treat a toothache. I can verify the numbing effect, but the chewed leaves taste terrible. Within a few minutes of chewing, the edges and tip of my tongue began to tingle and then grew numb. The effect lasted about 30 minutes.

A Wikipedia entry by Gibbons S., Leimkugel J., Oluwatuyi M. and Heinrich M. (2003), states that a major active ingredient in the plant includes the benzophenanthridine alkaloid chelerythrine that is an anti-bacterial effective against multi-drug-resistant Staphylococcus aureus.

The article goes on to say “It’s unsafe to use southern prickly ash if you are pregnant. It might start your menstrual period and that could harm the pregnancy.

The bottom line is that preparations from the bark or berries and an extract of this plant have been used for many years in herbal medicines, and officially prepared by pharmacists years ago.

The plant and its extracts are listed with dosages, preparation and uses in several of my father’s old pharmacy texts, including the Pharmacopeia of the United States, dated 1916. In those days, and into antiquity, many plants provided much needed medical treatments. In many cases they were effective. But often the effects were purely psychological – a placebo effect. Some, especially those recommended for cancers, probably did little or nothing.

Southern prickly ash was a component of the “Hoxsey Cancer Treatment,” long considered by many as ineffective or a hoax. Cantor D (2006). “Cancer, quackery and the vernacular meanings of hope in 1950s America.” J Hist Med Allied Sci. 61 (3): 324–68.

In 1936, Hoxsey opened a clinic in Dallas, Texas which became one of the largest privately-owned cancer centers in the world. At one point in the 1950s, Hoxsey’s gross annual income reached $1.5 million from the treatment of 8,000 patients. The treatment is still advertised on the Web and marketed in Tijuana, Mexico, but was banned in the United States in 1960.

Herbal remedies are all around us in the wild, but I definitely do not recommend experimentation with them unless you do a lot of research and try a small amount first to see how you react. The same goes for prickly ash. I’ve chewed the leaves and experienced their anesthetic effect, but my experience should not be used as an excuse for you to try this. You could make a mistake. And mistakes can be fatal.