It’s turkey time, so let’s talk about them. They gobble to attract mates - the males are called gobblers, and in this country, we gobble ‘em up this time of the year. However, eating turkey is neither confined to the United States nor restricted to holiday dinners. According to the National Turkey Foundation, during the year 2001, Israel was number one in turkey consumption, at 28.8 pounds per person. The U.S. was second, munching 17.5 pounds, while France, Italy, Germany, and the United Kingdom devoured 14.5, 12.3, 11.0, and 9.3 pounds per person during the year, respectively. In 2001, according to the Foundation, about “272 million turkeys were raised. Approximately 46 million of those turkeys were eaten at Thanksgiving, 22 million at Christmas, and 19 million at Easter.”

I probably should point out that some people in the animal rights movement think turkeys ought to be placed in sanctuaries rather than eaten, so they can live out their lives in a less threatening situation. To accomplish that goal, there are a number of “Adopt-A-Turkey” programs. For example, The Farm Sanctuary (www.adoptaturkey.org) will help you, for $15.00, to sponsor a turkey. [Editor’s note: In 2017 the price has increased to $35.00.] You get adoption papers and a picture of your bird. The fee, they say, assures the turkey lifelong tender, loving care in a non-stressful setting. Or, to go one step further, Farm Sanctuary will, if you are found to be acceptable adoptive companions, arrange full adoption so you can take a live “rescued” turkey home and care for it there for the rest of its life. Interesting, but to my mind, a fifteen-dollar donation to a “feed the children” international program may be money far better spent. 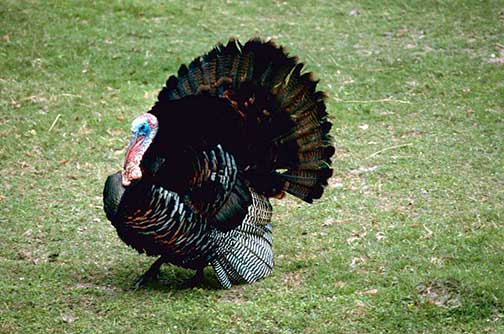 At one time, we barely missed having the turkey as our national bird.

Related to peacocks and pheasants, the turkey we roast, fry, and serve in endless leftovers, is a far cry from its wild relatives. Wild turkeys, the only poultry species native to the new world, were common dwellers in the woods of our country when the earliest settlers first arrived. They soon found the large birds to be quite tasty, and returning travelers took breeding stock back to Europe and England. By the 1500s turkeys were being raised in England, France, and Italy, and colonists to North America already were familiar with them. It is reported, and likely is true, that in 1621, turkeys were served with other fare as the settlers celebrated a feast of thanksgiving, a tradition made official by a presidential proclamation issued by Abraham Lincoln in 1863 establishing Thanksgiving as a national holiday.

As settlers and homesteaders moved west, wild turkey populations were severely depleted. They were shot for individual consumption, and to meet the demands of a growing market for their meat. By 1920, the birds had been completed wiped out in 18 of the 39 states in which they had originally been found. After WWII, a turkey restoration program began in an effort to relocate turkey flocks. Not only has the program been a success, the critters have become pests in some parts of the country, wreaking havoc on gardens and farms.

Wild turkeys are the largest game birds in our country, with males weighing from 17-30 pounds and showing few of the sluggardly characteristics of domestic varieties. Dinner turkeys can’t fly, but wild ones can hit 55 miles per hour in short burst flights, and they can run at 20-25 miles per hour. Hunters find them a wary and highly capable adversary. Bagging them requires careful use of camouflage and the ability to sit absolutely still for long periods of time. It’s also very difficult to sneak up on a turkey. Wild turkeys have sharp vision – in color; the placement of their eyes allows them to see an area of 270 degrees. And they also have excellent hearing.

Male turkeys maintain harems of up to fifteen hens, but take no part in incubating eggs or rearing the young. Ten to fifteen eggs, pale buff or speckled brown, about 2 ½ inches long and 2 inches wide, are laid in a carefully concealed nest on the ground. The young turkeys, called poults, emerge after 28 days and spend the first week of life eating a high protein diet of insects. Later they add grass seed, dogwood fruit, wild grapes, acorns, corn, oats, and wheat to their diet. At about two weeks, they can fly short distances and begin roosting in trees. Until then, they are vulnerable to attack by bobcats, coyotes, foxes, and great-horned owls.

Domestic turkeys, bred primarily for large quantities of meat, especially breasts, not are only non-fliers, but are a bit wimpy too. They’re subject to stress-initiated heart attacks. Turkeys in areas near aircraft test sites have been known to suddenly drop dead from cardiac failure caused by sonic booms. And yes, they can drown by tipping their heads back in heavy rain.

At one time, we barely missed having the turkey as our national bird. Although Benjamin Franklin thought turkeys were “vain and silly,” he nevertheless argued strongly that they ought to be our national symbol. Bald eagles, he said, were “cowardly” birds of “bad moral character.” Turkeys, he said, were “much more respectable…and a true original native of America.” Why do I have so much difficulty visualizing a turkey clutching a bundle of arrows and an olive branch as the emblem on a military officer’s cap, or the seal of the United States? Sorry Ben, this is one time I think you were wrong!

So, have a Happy Thanksgiving, but also take time to gain some perspective. Visualize the horrendous problems found across the globe, and be grateful for all that we have. As a people, we should be constantly filled with thanksgiving. As the hymn says, “count your many blessings.” Your perceived problems will largely shrink away as you realize how richly you have been blessed.