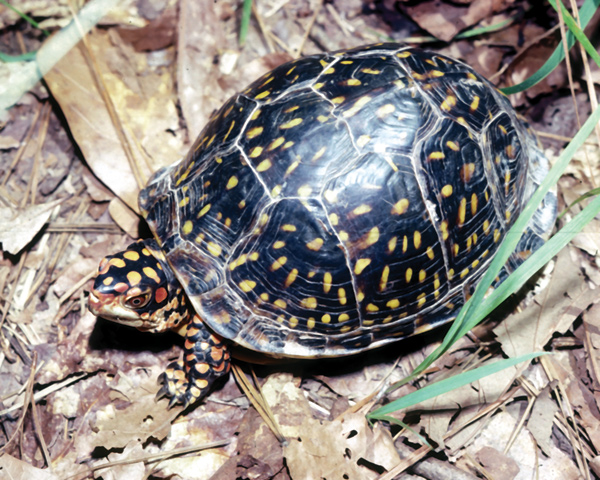 Photo by Terry Hibbetts - TPWD
A brightly patterned Eastern Box Turtle taking a slow but steady hike in the forest.

Box turtles are common in East Texas. They have a light to dark brown, dome-shaped carapace (upper shell) and may have yellow spots on their legs, neck and head. Males often have quite a bit of red on their head and long toenails. Adult box turtles are from 4 to 6 inches long and they live from 20-50 years.

However, their migratory and mate seeking travels don’t lend themselves well to roadways, where many are killed by unobservant drivers. Some cruel folks tell me they intentionally run them down just to hear them pop. Sad and disgusting.

One of the few fully armored animals since knights roamed the land, box turtles have a hinge about a third of the way back in their plastron (the lower shell) that allows them to withdraw into themselves, tightly closing the “hatches” both front and rear. Land dwellers, rather than true amphibians or pond occupants, they eat earthworms, snails, grubs, fruit, leaves, insects and sometimes even dead animals.

Turtles are reptiles and most people, asked to name common ones, usually think only of snakes, and less often mention turtles. The former are generally not very popular, but turtles usually elicit a kindlier response. Perhaps that’s partly because we’ve all heard Aesop’s tale of the race between the tortoise and the hare in which the overconfident rabbit, the hands-down favorite, goofs off and is bested by the never resting, constantly toiling turtle. The fact is, turtles are definitely slow, but they are certainly not quitters.

All reptiles share the fact that they are “cold-blooded.” Their metabolism, unlike ours, doesn’t generate enough heat to keep them warm and chilling brings their life-processes almost to a halt. They hibernate during cold weather but if they don’t find a well insulated hideaway cold weather can kill them. To maintain ideal body temperature they move into shade or burrow to escape heat and into the sun to warm up. Turtles trapped in direct sun will die of heat stroke.

Breeding is generally in the spring, but may also take place in summer and fall. When conditions are right after fertilization, the female digs a nest at night and lays from 2-8 eggs that incubate for about three months before hatching. The newborn turtle (turtlettes?) are about the size of a quarter and raccoons like them for bite-sized hors d’oeuvres.

Warning! Turtles often carry a bacterium called Salmonella that can make people very ill. Although it was once common to see baby turtles of various species for sale in stores, in 1970, the Food and Drug Administration (FDA) banned the sale of those under 4 inches in length after a widespread outbreak of salmonellosis, a food poisoning also associated with undercooked meat, chicken and eggs. According to the FDA, the Salmonella disease organism “can be found on the outer skin and shell surfaces” of most turtles.

The symptoms of salmonellosis include “vomiting, fever, diarrhea, and cramps. For high-risk individuals, such as those with weakened immune systems, those taking antibiotics, pregnant women, the elderly, and children under five, salmonellosis may be even more devastating, leading to blood infections (sepsis), meningitis, spontaneous abortion, and death.”

Box turtles populations are diminishing in Texas so taking one home as a pet is not a good idea. They require a complicated diet, pure water and scrupulously clean quarters. When the pet owner looses interest these long-lived turtles they are often released into the wild. However, the re-introduction may lead to failure to reproduce.

As with the recommended practice with all wild things, just appreciate them in their natural habitat and let them enjoy our fields and forests on their own terms.