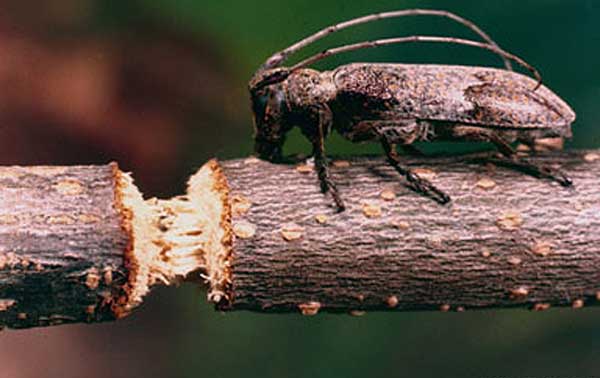 Photo courtesy of Clemson University - USDA Cooperative Extension Slide Series, Bugwood.org
This twig girdler beetle is perching on a pecan tree proudly displaying the circular wound she has cut in the branch.

Every few years these pesky little beetles attack our trees. This fall they are back. Since It’s been many years since I’ve written about them and readers have been asking, I’m doing it again. Drop me a line if you have them too.

Years ago, when I first noticed fallen twigs and dead leaves under our trees, I wondered if we were experiencing a carefully planned and executed terrorist attack carried out by demented squirrels. (Squirrels are always good to blame if nothing else comes to mind.) Nope, those nutsy little fluff-tailed rodents are not guilty – this time.

Actually, the culprits are small long-horned beetles called twig girdlers. About ¾ to 1 inch long with antennae “horns” longer than the critter itself, they live and carry out their nefarious activities from New England to Florida and west to Kansas and Arizona. Each year we have a few of them working our trees, but this year they seem to be especially abundant.

If you are noticing dead twigs dropping in your yard take a close look at the cut end of the branch. The girdler makes a perfect circle around a small branch as neat as a surgeon’s work. They don’t cut all the way through as a squirrel would but only through the living sap-carrying tissue, leaving the center of the branch intact. However, the wound cuts off the flow of water, minerals and nutrients in the little branch so that it weakens, dies, and drops off.

During the latter part of the summer, female girdlers lay three to six eggs in slits they cut in living branches, and seal the cut with a shiny waterproof substance. The beetle then heads down the branch toward the tree trunk and using their mandibles, girdles the twig and down it falls. The eggs hatch and carry out the rest of their life cycle in the dead branchlet on the ground. Maturing from mid to late summer, they start the whole process over again. The list of trees they attack includes pecans, hickories, oaks, apples, persimmons, dogwoods, poplars and many others.

Brownish-gray, the very hard-shelled beetles are extremely difficult to see as they sit lengthwise on the branch they’re cutting. Their camouflage colors and position on the branch makes them blend in like stealthy little Ninja warriors.

Although the dropped dead branches are unsightly, the beetles’ depredations are not particularly hard on their target trees. New buds will replace the cut branches and the trees will go on as before.

Insecticides are only marginally effective in controlling girdlers, but it’s a good idea to gather up the snipped branches and burn them to reduce the number of beetles that will show up next year.

So now you know that Texas is not only home to longhorn cattle but also long-horned beetles. But I’m sure the University of Texas at Austin isn’t likely to exchange Bevo, the football team’s mascot for this little beetle, even though long-horned beetles have “horns” longer than their body and Bevo doesn’t. Can’t quite see “Bevo the Beetle” being led out on the field at UT games. Or should I say, you couldn’t see it at all. Too small. Besides you’d never find a collar that would fit. So, these interesting insects will just have to remain another curious creature of our fields, forests, and yards.