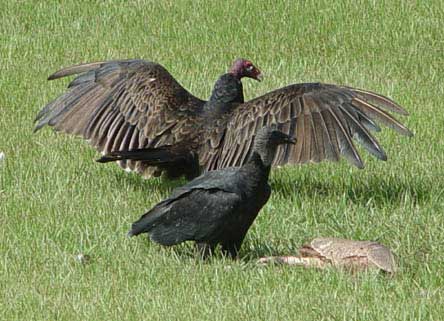 Photo by Paul H. Risk
Vultures don’t like to share their meals, so they try to look tough by flaring out their wings and staring down their competitors.

A shadow flitted across the grass as a vulture, soaring so high he was almost at the limits of my unaided vision, drifted lazily on the day’s developing thermals. His sharp vision caught a glimpse of something unusual in our yard. A dark spot. Whoa! A dark spot with a tail and legs! He circled lower and immediately identified a dead armadillo. Gourmet dining awaited him! Although the critter was a little fresh for his taste, and thus probably not as tender as it would be after a few more hours in the sun, the vulture realized he’d better quickly take vantage of this windfall. He dropped to the ground to investigate. Yep, he’d been right. The darn thing was way too fresh and stringy, but hey, don’t look a gift horse in the mouth.

Almost miraculously, the meal didn’t remain a secret for long and soon there were three more vultures chowing down on the al fresco meal. In just over a day, even the armadillo’s shell was gone, although I suspect they just carried it off to a more secluded location to pick over the left-overs.

Vultures are much maligned birds. Most people think of them, if at all, with contempt and regard them as dirty scavengers unworthy of any respect. Scavengers they are, but dirty they are not. They like nothing better than a nice bath in a stream or pond and will often spend up to a half hour or so dunking, scrubbing, and preening.

Vultures are vital to the complete cycle of life in fields and forests. They clean up dead animals that would otherwise lay around and rot, possibly spreading disease organisms into the environment. At the very least, the fragrance of decaying flesh would be much more noticeable without them. Their digestive system is able to destroy disease organisms – viruses and bacteria – that might otherwise sicken or kill them. Indigestible or undesirable animal parts, such as bone fragments and hair, are regurgitated as an odorless, compact ball or pellet somewhat smaller than a hen’s egg.

Vultures may be able to detect the odor of decay in parts per trillion and trace the source unerringly, even when it can’t be seen. Jim Rible, in Wildlife of The Rogue Valley [Oregon], writes that ethyl mercaptan is one of the chemicals released from decaying animals. This is the chemical added to natural gas, which otherwise would be odorless, to give it its distinctive aroma. He says that Union Oil engineers sometimes located gas pipeline leaks by the fact that vultures would circle over the break, assuming, I suppose, that there must be one whale of a dead thing down there.

Large birds with black bodies, reddish or grayish featherless heads and legs, long beaks, and wingspreads that can reach just under six feet, vultures are quite sociable, often sharing roosts with as many as 100 others of their kind. Roosting places are usually tall dead trees and they often use the same tree for years on end. Vultures don’t fly at night, settling down for the night as darkness falls. In the morning they can often be seen in their roost tree perched with their wings partly extended to catch the sun.

Strangely, vultures sometimes become attached to humans. Their preferred roosts are often close to homes, even though more distant roosting sites are available. There are reports of vultures regularly accompanying walkers and joggers, flying along above them during their regular exercise routines. Although that might unnerve some of us, there is no evidence that the aerial surveillance is anything but curiosity. Some even suggest that these big birds like people. I’m afraid I’d take this special attention as a grim omen.

Vultures are one of nature’s most spectacular fliers, which they do for both food and fun. Just before roosting for the night, they often engage is soaring, diving, and chasing each other, rising out of sight above their roost location, then swooping back down to repeat the process until bedtime.

If glider pilots were half as adept at sensing air currents as vultures are, they would have a lot more fun and stay aloft much longer. Perceiving the most subtle changes in air flow, vultures ride rising air columns and bubbles – thermals – rising higher and higher without a single wing flap.

In short, vultures are amazing and enjoyable to watch. Next time you spot one or a flight of them, stop and watch their graceful, effortless sky ballet and add another bit of knowledge to your understanding of Texas fields and forests.