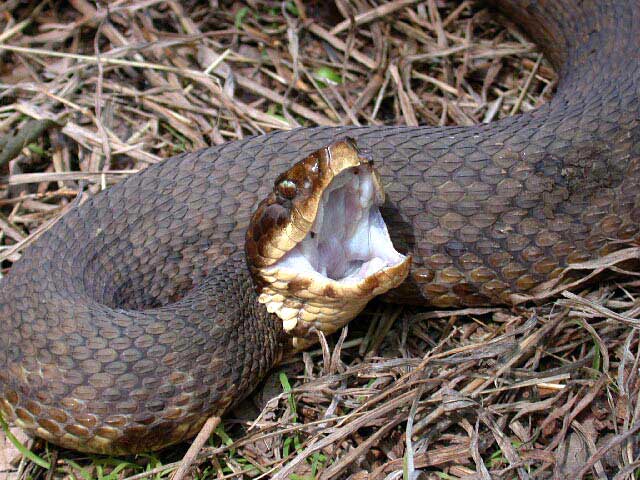 There is a saying that everything in Texas has stingers, thorns, or fangs. It’s not true, but we certainly have our share of venomous snakes. In fact, we have all four types of poisonous snakes found in the U.S.: Rattlesnakes, Copperheads, Water Moccasins, and Coral Snakes. Luckily, they would all rather flee than fight, so given a chance, they will usually avoid contact with people. After all, we have big feet. What snake wants to be stomped on by a size 12 boot?

Moccasins are pit vipers, like rattlesnakes and copperheads, so-called because of heat-sensing pits on the sides of their head that help them find prey in darkness. In fact, they prefer to hunt at night. They are the only poisonous water snake in the United States.

Young moccasins have a varied coloration, including patches and bands that they lose with age. A mature moccasin typically has a thick, muscular body that tapers rapidly toward a rather narrow tail. Their head, like most pit vipers, is distinctly triangular with a narrow “neck.” Non-venomous snakes usually have a more tapered head that is hardly distinct from their body width. Their eyes have vertically slit-shaped irises, but if you can see that much detail, you’re too close.

They inject venom through a pair or retractable fangs in the front of their mouths. The fangs are hollow, like hypodermic needles. Sometimes they lose a fang, but a missing one is quickly replaced by reserves that are constantly forming behind the working set. They use the venom to subdue prey, typically rodents, frogs, fish, birds, and other small animals. The meal is swallowed whole and sent down the snake’s throat, head first.

When I was a young sprout, my friends and I fervently believed that cottonmouths were so venomous that if you were bitten, there was no hope for you. You’d be dead before you hit the ground. That’s a myth. Although their venom is toxic, destroying red blood cells and muscle tissue, they are nowhere near as poisonous as we believed. Rattlesnake venom is generally more toxic. Still, if you are bitten, seek medical aid immediately. An antivenin is available, but is often not required to treat the bite.

These snakes vary from two to four feet in length. Females are generally smaller than males. They are found, as would be expected, in ponds, lakes, and streams. Excellent swimmers, they do equally well in water and on land. Often they are seen draped over tree branches sunning themselves.

Water moccasins breed in the spring, producing 6-8 live young at a time during August and September about every other year.

Although they try to avoid people, when backed into a corner they raise their head, hiss, open their bright white mouth widely and display their fangs – hence the name cottonmouth.

Like all snakes, they are cold-blooded, meaning that they maintain and control their body temperature by moving from shade to sun. If they get too much sun they can die of heat stroke. When the weather cools off, so do the snakes, becoming more slow moving and sluggish as the temperature falls. At about 50 degrees they become dormant and don’t resume normal activities until the weather warms up.

Most people simply don’t like snakes, poisonous or not. I’m not sure why. Perhaps it’s a cultural thing. Or maybe it dates clear back to Adam and Eve. Who knows? In any case, they serve an important role in controlling rodents. Want to be knee-deep in mice and rats? Kill all the snakes. Sound like a good idea? No? Didn’t think so.

Snakes are just another reason the fields and forests are so fascinating. Just don’t overreact to them. You’ll give them an inferiority complex!