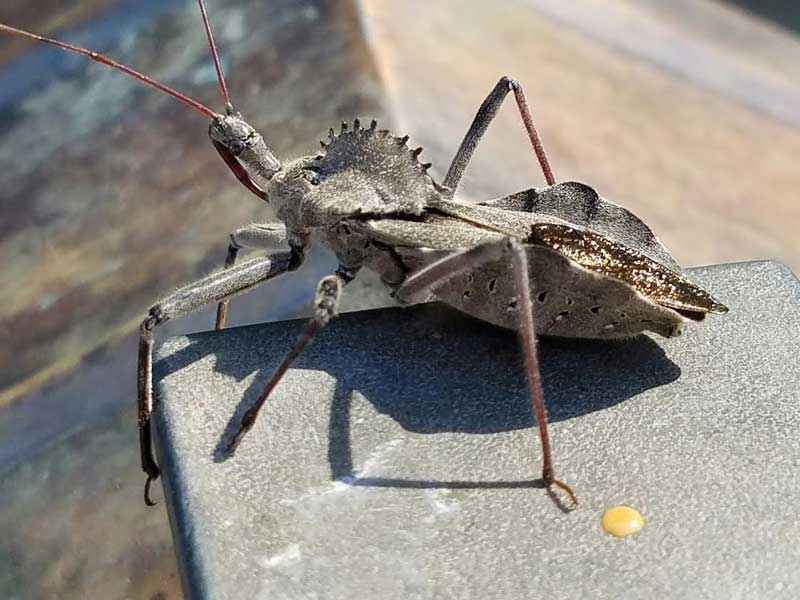 With an appearance only a mother could love, wheel bugs are also called assassin bugs. The name is well deserved since they feed on other insects; almost any kind. These predators are an inch or a bit longer, with a narrow head, long antennas, large eyes, and a long, piercing proboscis or beak containing 4 razor-sharp cutting/piercing mouth parts. When not in use, the beak is folded underneath their head.

These insects mature and roam during the mid-summer. As fall approaches mating takes place, and 60-100 eggs are deposited on trees and shrubs, which then hatch in the spring.

Not particularly common, wheel bugs are nevertheless found in about a quarter of the central, southern, and southeastern states. The one in the photo was in northern Virginia.

Frankly, they remind me of a prehistoric animal. Their name comes from a large, coarsely toothed ridge on their back that looks like part of a cogwheel or saw blade.

Wheel bugs usually walk. They can fly, although their flight is noisy and a bit clumsy. Long-legged, they look like they would be rapid runners. But they typically stalk very slowly and deliberately looking for a meal.

When a suitable insect is found, the attacker grasps it firmly and sinks its spear-like feeding tools into the selected prey. They then inject a “saliva” of mixed enzymes into the hapless victim that anesthetizes, immobilizes, and kills the attacked insect. The enzymes dissolve all the internal structures of the attacked insect. The resulting meal “soup” or “slurry” is then sucked up, and a satisfied feeder moves slowly away in search of more food. Well, maybe “satisfied” is a bit of a stretch, implying human-like emotions, but you get the idea. And if the image of turning solid food into gourmet soup seems grotesque, you definitely don’t want to know, or especially see, what happens to your hamburger and fries after you swallow them.

Even though these six-legged killers eat almost anything that moves – or doesn’t – they are voracious diners on a wide variety of insect pests. Sadly, they also eat lady beetles and bees. (There I go again, moralizing on the propensities of the feeding behavior of wild things.)

As ugly as they are, I have no desire to pick one up, and that’s probably a good idea. Their proboscis can impart an extremely painful bite, with swelling surrounded by a reddened, inflamed area. So far I can’t speak from experience, but those who have had a close and aggressive personal encounter with a wheel bug say the bite is extremely painful, comparable to a bee or hornet sting. The bite area may become raised and have a hard core in it. Healing can take up to two weeks. Spreading tissue damage usually indicates infection, and a doctor should be consulted. Although related to kissing bugs that carry a dangerous tropical illness called Chagas Disease, wheel bugs are not disease vectors.

Generally, these scary-looking insects are not aggressive toward humans, and are simply another example of the wide and interesting variety of living things found in our fields and forests. Just don’t pick them up.