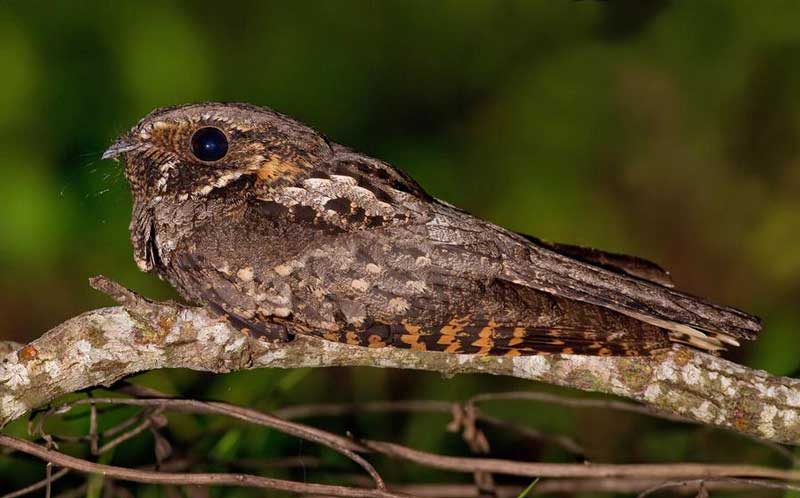 Photo by Paul Cools
A female Eastern whip-poor-will looking like a part of the tree it’s sitting on.

A little over a week ago I heard one of the season’s first Whip-poor-wills. For some reason known only to his psychiatrist, this one perched on top of my bird feeder’s support when I wasn’t looking and let loose a blast of whipping and willing that about scared me out of my skin! Usually I hear them at a decent distance from the house, and their unique call is kind of pleasant and interesting. But at close range, and ounce for ounce, these 9 to 10-inch birds belt out a call that can only be described as bone-jarringly loud. Bird watchers seem determined to describe avian songs and calls by spelling out some sort of phonetic, word-like series of letters, thus Peterson’s Birds of East Texas describes the Whip-poor-will’s call as “prrrip’-purr-rill’,” and I guess that’s close enough.

Here is a very good recording of the whip-poor-will’s call:

Their cousin, the larger Chuck-will’s-widow, has a first syllable with a distinct snapping or chucking sound, written chuck-will’wid’ow, that sounds, when they’re close, like a small whip being cracked. Once a “–will” successfully blurts out one call, personal fulfillment apparently demands that they repeat it, over and over and over and over, sometimes for as long as an hour without a pause or laryngitis. Whip-poor-wills pass through East Texas on their way north, often spending about three weeks in this area. Later in the spring, the Chuck-wills begin housekeeping here and raise their young before they too head north. Once, while camping in Maine, a Whip-poor-will set up for business in the middle of the night above our tent and commenced to bellow out his call. Sleep was impossible, and I’m sad to say, it was a relief when the bird finally departed for greener pastures. 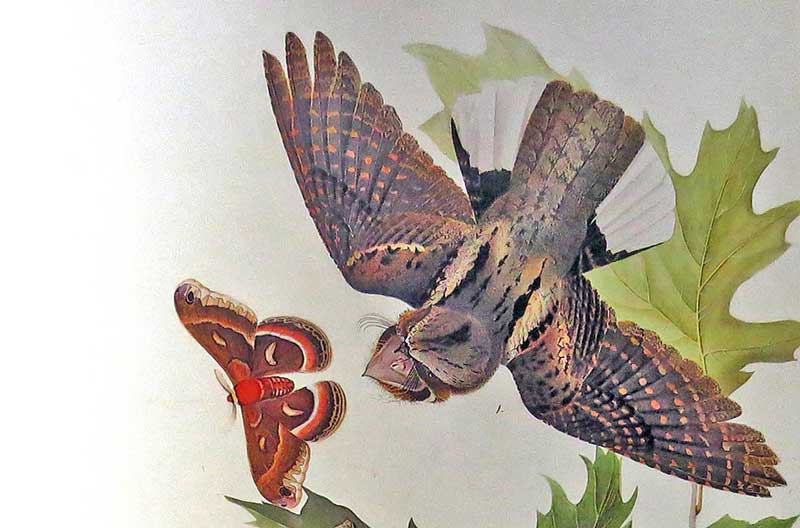 This illustration gives an indication of the size of the whip-poor-will’s mouth as it chases insects.

Whip-poor-wills, along with Chuck-will’s-widow, are in the Goatsucker family, members of which include Poor-wills, pauraques, and nighthawks. The Whip-poor-will’s tongue-twisting scientific name is Caprimulgus vociferus. In the legends of Rome, a relative of the Whip-poor-will, called the European nightjar, had the reputation of sneaking up on unsuspecting goats and drinking their milk - so, capri mulgus. Their species name, vociferous, aptly describes their strong voice. Incidentally, Goatsucker birds are not related to that mythical, fanged, flying demon called Goatsucker or Chupacabra in Mexico.

Wills’ leaf-brown coloration camouflages them so well that an observer within only a few feet may be hard pressed to see them. Perching length-wise on branches rather than across the branch like most birds increases their hiding ability. Although Whip-poor-wills have a black patch on their throat, the mark just looks like a dark shadow and completes their successful concealment behavior.

Whip-poor-wills and Chuck-wills are night flyers, with round wing tips, and they fly like they barely passed flight training. Resembling a big brown moth flitting through the evening sky, they swerve and weave, scooping up insects with their large mouth. Their gaping maw is fringed with stiff hairs that assist them in ‟netting” flying insects, and is so wide that they can scoop up June bugs, grasshoppers, and large moths, as well as smaller fare such as mosquitoes and gnats. With their mouth fully open, they look as if their flattened head has split open in the middle. 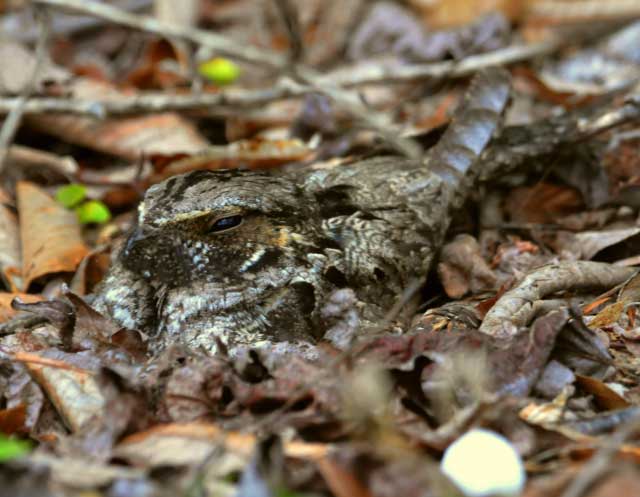 Photo by Jeff Catlin, from www.carolinabirdclub.org
This female whip-poor-will is virtually invisible as it sits on its nest on the ground.

Although you’re not likely to see them if they are perched, keep your eyes on the evening sky. You may be lucky enough to see one flutter past. But nighthawks, which look similar, are also out at night. You can tell the difference because nighthawks have pointed wings with a white marking on them, in contrast to the -wills rounded, brown ones.

Whip-poor-wills and Chuck-wills both nest on the ground, laying two eggs marked with brown, yellowish-brown, and purple markings, in deep underbrush on old leaves, pine needles, or decayed wood. When a -will’s nest is discovered, they sometimes put on quite a show, fluttering around as though they have a broken wing, gasping and flapping as they strive to lure predators away from the nest site.

Since they are nocturnal, -wills have very large eyes, and at night their pupils are fully dilated, giving them a sort of bug-eyed or doll-eyed appearance. During the day, the pupils of their eyes reduce to a slit.

What a description! Loud-voiced, bug-eyed, big-mouthed, fuzzy-beaked, clumsy flying, moth-like birds. Nevertheless, these migrants lend a magical quality to the night. Take the time to go outside and listen. Nothing in the woods sounds anything like them, and you’ll add another great experience to your activities in East Texas’ fields and forests.