Photo courtesy of Texas A&M University
Looking a lot like the European boars they’ve bred with, feral hogs in East Texas are everywhere.

Blasted, miserable, pointy-nosed, split-hoofed, vandalizing critters that they are, a bunch of feral pigs, also known as Pineywoods Rooters waited until we were on vacation recently and then thoroughly plowed up a large area of our lawn. When I say plowed, I mean it. The illustration clearly illustrates the damage they do.

Swine were originally brought to this continent by Hernando de Soto in 1539 and released in Florida. People who owned these pigs usually allowed them to roam freely and large numbers became wild or feral. Many years later, European boars were imported into this country for sporting purposes and they successfully interbred with both the wild and domestic hogs. The result is the present-day Piney-woods Rooters, cross-bred feral hogs with all the bad nature of European boars and the combined intelligence of boars and domestic pigs. Smart, wary and constantly hungry, they decimate huge areas of farm fields, fruit orchards, lawns and forests each year. Their population in Texas is estimated at well over 2 million animals, all bent on destruction. It’s been estimated that they do over $50 million in damage annually to farms and ranches.

Wild hogs have an appearance that only a mother could love. With big heads, no necks, little beady eyes and tusks, wild pigs appear like something thrown together with mismatched spare parts. They look a lot like European boars and produce a litter of 4-6 piglets at least twice a year. They are ready to reproduce at six to eight months of age.

Wild pigs are true omnivores, eating almost anything. Their diet includes snakes, amphibians, birds and their eggs, insects, worms, as well as small mammals. Even carrion is gobbled up, and they are known to eat manure as well. Most of the damage they do to lawns is caused as they root up the grass looking for insect grubs.

Acorns and other nuts, fruits, mushrooms, roots, bark, and seeds are all on their food list. Although they are not grazers, they will even eat some grasses. They will rear up on their hind legs on orchard trees, breaking off the branches to get fruit. 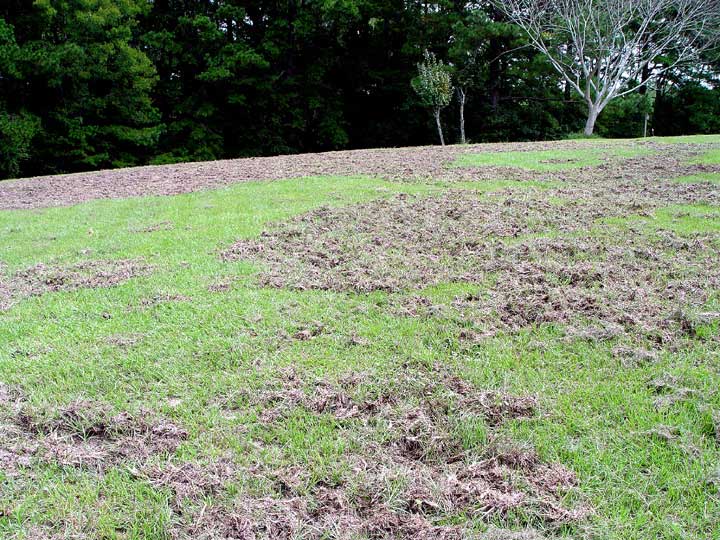 Photo by Paul H. Risk
My yard may never be the same after this free plowing service provided by feral hogs.

Controlling wild pigs has not been successful. They are avidly hunted by some people, often using dogs, but this pressure makes very little impact on their populations. Baited cage traps are sometimes used with moderate success. But, large fence enclosures built like mazes seem to work better.

Wild pig meat is popular with Europeans. Some hunters sell the pigs they shoot for $200-$300 apiece to processors who ship them overseas. There is no doubt that they are flavorful.

Feral pigs can be hunted year-round and if they are decimating your property no hunting license is necessary. They can even be hunted at night with a spot-light, although game wardens are a little sensitive to the use of night lighting because of deer poachers who use the same technique. To be on the safe side of the law, it’s good to have a current hunting license whenever you stalk them.

Not only are feral hogs physically destructive, they also carry pseudorabies, a disease unrelated to true rabies and not communicable to humans but that can be transmitted to domestic swine. It sickens them and causes spontaneous abortion and stillbirths.

Swine brucellosis is another disease carried by feral pigs that also affects domestic pigs, weakening them and causing lack of productivity. There is no known cure for the disease.

Humans can contract brucellosis from infected hogs causing recurring fever, chills, sweating, weakness, headaches, pains in muscles or joints, loss of appetite, and weight loss. People who butcher wild pigs should wear disposable rubber or plastic gloves, burn or bury the gloves after use, wash thoroughly with soap and water and cook all meat thoroughly.

With luck and proper personal health precautions, some of the miserable animals frequenting my lawn will soon meet a bullet and find their way into my freezer and several of my friends.

“You mean you’d actually kill ‘em?” Well, I try to explain it to them this way: “I wouldn’t hurt you for the world, but you’re standing where I’m about to shoot.”