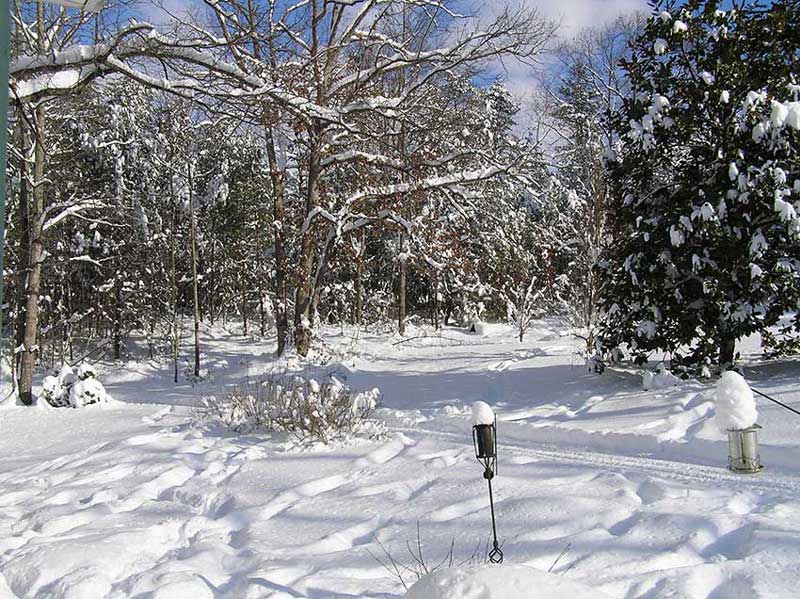 Just before Christmas snow came to much of the east and northeast coast. At first the flakes came drifting gently, then with more insistence and finally a blizzard unleashed its full intensity. Visibility decreased to a few yards and modern gasoline chariots slid with increasing frequency into drifts and ditches, stranding fragile, unprepared city dwellers in smothering, overwhelming billows of frozen precipitation. By storm’s end, two feet of frozen fluff had fallen in the part of Virginia where we intended to spend a family Christmas.

Barns, outbuildings, homes, and sheds sat capped with rounded helmets of snow, isolated and trackless in the midst of the white wilderness. Roads, both small and large, were impassible and cattle stood stoically by white encased hay bales. Virtually all travel, ground and air, came to a stop. Tree limbs fell on power lines and in many locations, everything electrical failed. The hustle and bustle of civilization’s constant noise receded into snow muffled silence. What a blessing. 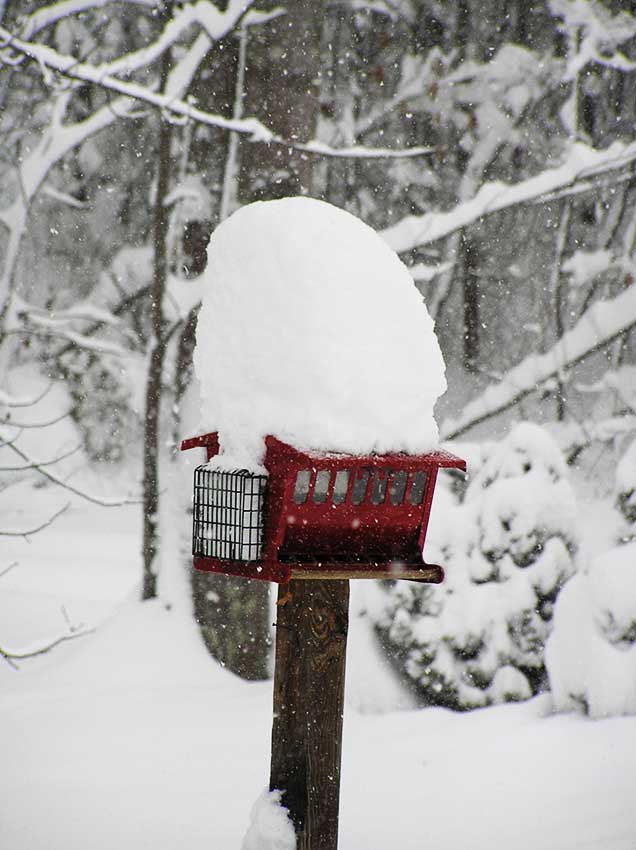 Photo by Elizabeth R. Risk
The birds seemed to feel a little isolated and overwhelmed, too.

With power loss came near panic for many people. Accustomed to constant stimuli of interpersonal contact, television, music, computer games, Twitter, Facebook, and numberless other interactions, solitude descended like a suffocating, smothering cloud. They were left only with the solitude of self – an aloneness that was somehow intimidating. Some, although not alone, felt trapped with only family members for company. Scary.

We drove to Virginia a few days after the storm, through wintry storybook scenery and mostly blocked side roads. Miraculously we managed to successfully negotiate my son’s driveway and wrestle luggage through the accumulated snow and into the house. All was well in our relative isolation.

Although snow is seldom a source of isolation in East Texas, in earlier days not so long ago, widely separated homesteads and ranches accomplished the same thing. Without radio, television, computers, and with limited transportation, families did just fine alone. Kids grew up able to be by themselves and capable of creating their own diversions. In fact, solitude greatly blessed their lives.

Some people need or crave more solitude than others. Frankly, after too much human interaction I become “peopled.” Its symptoms include irritability, nervous tension, and a tight chest. No, wait. Maybe it’s just a heart attack. But seriously, what I need then is to escape for awhile. Sometimes that means just sneaking off to a back room to read. At other times, it means a walk in the woods to find a place where I can sit quietly and, as my mother used to say, “listen to nature grow.” I first found solitude therapy when I was a kid hunting in the then nearly unpopulated areas near Dallas like Farmers Branch. Although I carried either a 20-guage single-shot shotgun or a .22 caliber rifle, I found solace in solitude just sitting watching leaves flicker in the breeze, clouds shape-shift, and listening to birds singing. Stalking game dropped way down on my list of priorities. Many adult hunters I know spend most of their “hunt” simply soaking up peace and tranquility. No phones, no “honey do lists,” no email, nobody to break the spell. Just an outdoor ointment – a balm that heals. Seeking and finding an inner peace. 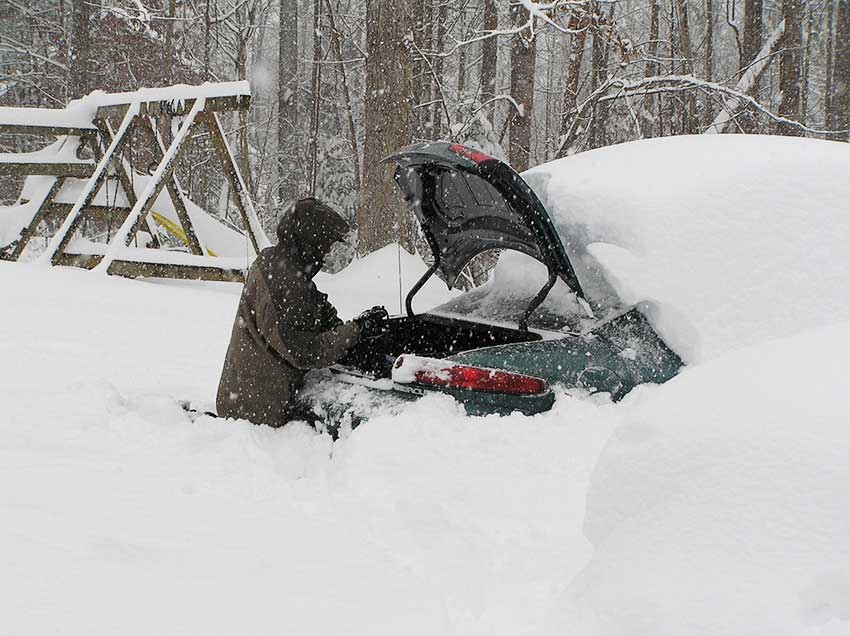 Photo by Bradley P. Risk
Unpacking cars was a little challenging after the storm’s blast.

On the other hand, there are many severely deprived people, usually “townies” nowadays, who have never experienced nature’s beauty, intangible bounty and restorative influence. I’m not as worried about adults in that situation as I am concerned about children and youth. I’m not sure they can grow up mentally balanced in the absence of nature.

Some fear solitude, a condition called autophobia which means fear of self. The sensation of being alone terrifies them. Nature phobias include agoraphobia, the fear of open spaces, and dense forests may produce claustrophobia for some people. Poor Charlie Brown in “Peanuts” was diagnosed by Lucy as having pantaphobia – the nonspecific fear of everything.

Personally, I’m only afraid I won’t get my isolation fix soon enough and often enough.

In my case, I just need a little more interpersonal space. Let me just slip away, walk away, or run away to my private island of nature therapy. Winter in East Texas easily provides ideal isolation treatment. No bugs, low humidity, moderate temperatures. Just peace, glorious peace, to recover from more than plenty of family togetherness.

The poet Samuel Taylor Coleridge sums up my feelings and my needs for:

A green and silent spot, amid the hills,
A small and silent dell!
... bathed by the mist ... fresh and delicate...
Oh! 'tis a quiet spirit-healing nook!