With temperatures in the low 70s recently, it’s hard to believe it’s still winter. It has been feeling more like spring. Just be glad you aren’t in the midsection of the country or the NE coast where there is absolutely no doubt about the season. They are eyebrow deep in snow – you know – crystallized rain? That white stuff the Peanuts Gang tried to catch on their tongues and that Lucy declared was not ripe until January. Whatever, I’ve been there, done that, and I don’t miss it much.

Winter, though cold, is a great time for stargazing. The best and brightest constellations are in the sky during this season. Hourglass-shaped Orion The Hunter is high in the SSE with its bright stars Betelgeuse (reddish in color) on its left side and Rigel (white in color) on the right. Gemini The Twins are left of Orion as you view them, with Castor and Pollux on Gemini’s left end. If you are reading this on the 4th of February, the moon was full yesterday and is now just beginning to slowly wane, becoming less bright each night. Tonight the moon rises shortly after sunset, and the bright orange/yellow “star,” the planet Jupiter, will have risen shortly before and will be higher in the sky each night. 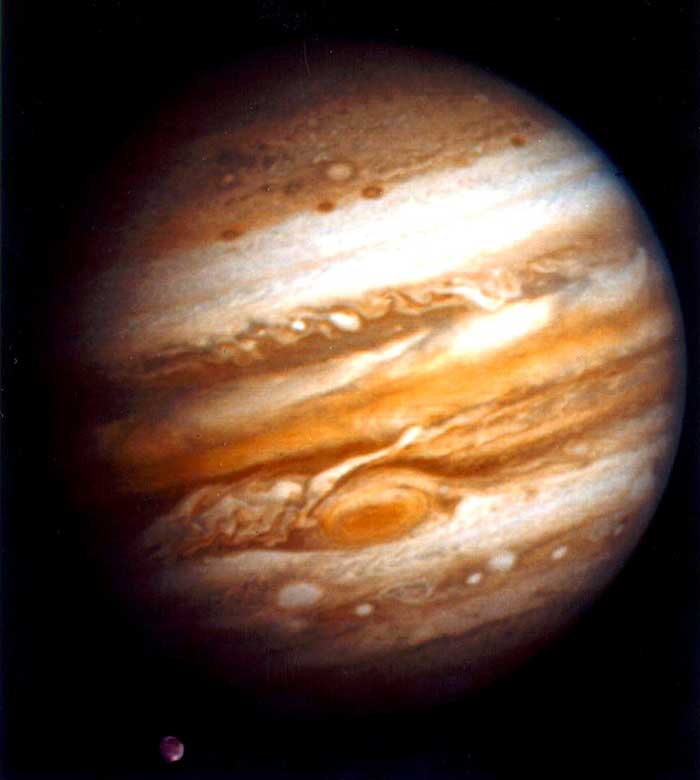 NASA photo
Bright orange-red Jupiter is now gleaming in our eastern sky shortly after sunset. This giant planet is 11 times the diameter of Earth. One of its moons is visible in the lower left of this photo.

Rigel is 860 light-years from Earth, Betelgeuse is 640 light-years, Castor 50 light-years, Pollux 35 light-years, and Jupiter a mere 489 million miles. To put this in perspective, light travels at about 186,000 miles per second. So when you are looking at Rigel, you are seeing light that left there 860 years ago, Betelgeuse 640 years, Castor 50 years, Pollux 35 years, and light from Jupiter only about 30 minutes. Hmm! I wonder if celestial bodies as far away as those four stars are really still there. In other words, your eyes may deceive you.

Gazing into the night sky is a great way to put things into perspective. But at the same time, it’s a little scary when you compare times and distances like these with the average human lifespan. A person, on scales like these, only lives a brief flicker of time. May I be depressed now? I guess not. Can’t worry about things like that. When I look to the heavens, the stars and constellations are always the same, providing at least a brief calming influence uncluttered by the discouraging and frightening personal events of daily life and crises around the world.

Space science never ceases to amaze me. Recently, a probe sent into space by the European Space Agency ten years ago made a successful rendezvous with and landed on a comet, taking samples and sending the data back to earth. I can’t even imagine the calculations that allowed it to catch up with the comet as it raced along at 84,000 miles per hour 300 million miles from Earth. The International Space Station orbits the earth, and in near-zero gravity scientists perform complex experiments. Since 2004, a U.S. roving robotic vehicle has been driving around the surface of Mars taking soil and rock samples, while providing outstanding pictures of the planet’s surface. Originally, it was expected to be functional for only 3 months.

Within the past few days, a mysterious burst of radio energy has been received by astronomers. There is no definite explanation for the event but observers are cautioned not to get excited about the opportunity for communication with alien civilizations yet. Frankly, I have to wonder how we’ll ever deal with extraterrestrial politics when we can’t even agree on illegal aliens from our planet crossing our borders. Will extraterrestrials have to have passports and visas? You think we’re alone in space? 1800 so called exoplanets have been discovered so far. I wonder how many have advanced life forms, and what do they think of us?

In short, the natural processes in our fields and forests don’t stop at the treetops. They extend into space, on and on forever. Mind-bending, isn’t it?