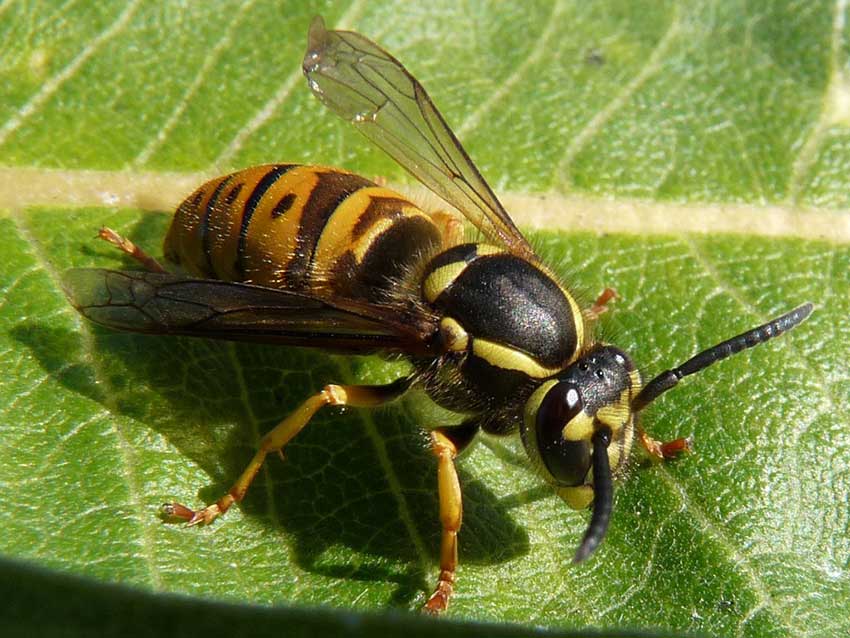 Photo courtesy of WiseAcre, wiseacre-gardens.com
Yellowjackets are very common, if not popular, summer and fall fixtures in the outdoors.

Most of us are familiar with yellowjackets, those uninvited pests that love to wander through our picnic munchies. During this part of the summer, they are most interested in meat and may light on your raw hamburger or steak, cutting out small, neat, circular chunks to take back to their families.

From mid-summer on into fall, a shift in yellowjacket behavior takes place. Shorter days will herald the end of the colony and the workers seem to sense it. Their desire to help feed others of their kind will wane as they turn to sweets and an “eat, drink and be merry, for tomorrow we die” attitude. Ripe or overripe fruit under orchard trees will soon be crawling with these critters as they imbibe the sweet fruit juices. Watermelon slices on your picnic table will become irresistible to them.

By late summer and fall, yellowjackets are so bent on satiating their personal desire for sugar that they often crawl right into pop and beer cans to get at the beverages. The problem is that they’re sometimes still there when a late-season picnicker takes another swig and gets a tangy, buzzing wasp in the mouth along with a stung tongue. Worse yet, some people have swallowed yellowjackets, been stung inside their throat, and the ensuing swelling closed their airway, creating a life-threatening medical emergency. Not quite as serious, but extremely painful is for the wasp to be gulped all the way down to the stomach where, in its last efforts, it plants its stinger there. Victims say heartburn pales into complete insignificance compared to this pain.

Yellowjackets are social wasps that live in colony nests that may contain as many as 4,000 to 5,000 workers. They nest in trees, shrubs, or protected places like hollow walls and flooring, in abandoned sheds, holes in the ground, under dead logs, and even in mouse burrows. Only fertilized queens survive the winter, hiding in sheltered locations until spring brings them out to lay eggs and begin a new nest site. Old nests are not reused.

Yellowjacket stings, for most people, are not terribly dangerous and the pain is usually not severe. However, some people react suddenly and terribly with anaphylactic shock, losing consciousness and dying in less than 30 minutes. This severe allergic reaction is uncommon, but in hypersensitive people, most bees and wasps can cause it. Many more people die each year from bee and wasp stings than from venomous snake bites. People who have had a severe sting reaction that causes numbness or tingling of the face, lips, tongue or nose, blurred vision, difficulty breathing, dizziness, and extensive swelling should talk to their physician about carrying an epinephrine auto-injector called an EpiPen®. 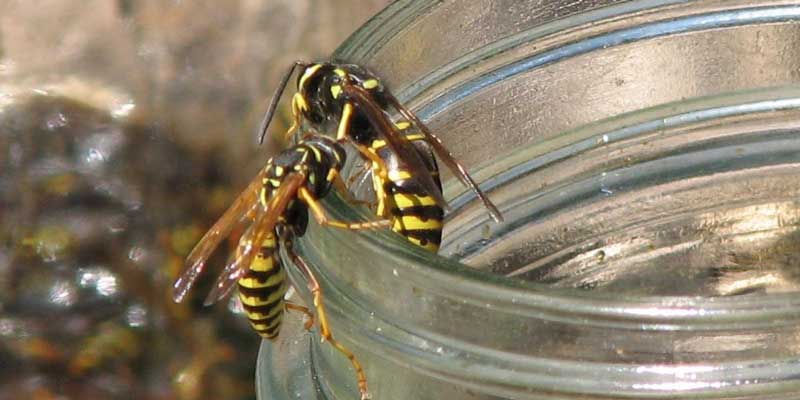 Photo courtesy of Brown County – University of Wisconsin Extension Service
Yellowjackets are constant pests at picnics. During most of the summer they prefer hamburgers and hotdogs but by late summer and fall, they turn to sweets.

A yellowjacket’s stinger is not barbed like that of a honeybee, so it doesn’t remain in the victim. They can sting numerous times. They are notoriously short-tempered when their nest is disturbed, so be very careful mowing grass in areas that have become overgrown and may shelter a ground nest.

If you are stung, a device called a Sawyer Extractor®, available in many camping, fishing and hunting stores, is very helpful. It applies a very strong suction to the bite site and withdraws just enough venom to greatly alleviate pain and swelling. Never cut into the sting, just use The Extractor®. Taking one or two 25 mg Benadryl capsules can provide relief, and relax you as well. Creams containing Benadryl or hydrocortisone are also recommended, and StingKill® swabs containing benzocaine can reduce pain.

Yellowjackets attack the highest moving thing, generally your head. Getting tangled in your hair doesn’t help their attitude one bit. They fly about 7 miles per hour, so you should be able to outrun them, especially with the adrenaline boost produced by the fear of their assault. Diving into a pond tends to discourage your attackers but remember, you have to come up sometime, so don’t surface where you first disappeared. Oh, by the way, it really helps to be able to swim before you jump in!

Take comfort in the fact that the yellowjackets you’ll see this fall will be mostly on the way to the Happy Buzzing Ground. Also, when they’re foraging through your drink cans and fruit, they are so self-centered that they are not as likely to sting. So watch out for these striped panhandlers with interest and a good measure of caution. And be sure you don’t drink ‘em!